In terms of number of speakers and dominance, the most prominent of the languages of Spain is Spanish (Castilian), spoken by about 99% of Spaniards as a first and second language.[6] Basque is spoken by 2%, Catalan (or Valencian) by 17%, and Galician by 7% of all Spaniards.[7]

Distribution of the regional co-official languages in Spain:

Spanish is official throughout the country; the rest of these languages have legal and co-official status in their respective communities, and (except Aranese) are widespread enough to have daily newspapers and significant book publishing and media presence in those communities. In the cases of Catalan and Galician, they are the main languages used by the Catalan and Galician regional governments and local administrations. A number of citizens in these areas consider their regional language as their primary language and Spanish as secondary. 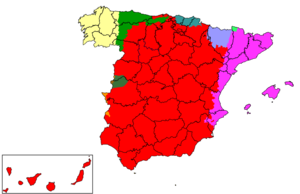 The vernacular languages of Spain (simplified)

In addition to these, there are a number of seriously endangered and recognised minority languages:

Spanish itself also has distinct dialects around the country; for example, the Andalusian or Canarian dialects, each of these with their own subvarieties, some of them being partially closer to the Spanish of the Americas, which they heavily influenced at different degrees, depending on the regions or periods, and according to different and non-homogeneous migrating or colonisation processes.

Five very localised dialects are of difficult filiation: Fala, a nearly extinct variety of its own mostly adscribed to the Galician-Portuguese group; Cantabrian and Extremaduran, two Astur-Leonese dialects also regarded as Spanish dialects; Eonavian, a dialect between Asturian and Galician, closer to the latter according to several linguists; and Benasquese, a Ribagorçan dialect that was formerly classified as Catalan, later as Aragonese, and which is now often regarded as a transitional language of its own. Asturian and Leonese are closely related to the local Mirandese which is spoken on an adjacent territory but over the border into Portugal. Mirandese is recognised and has some local official status.

With the exception of Basque, which appears to be a language isolate, all of the languages present in mainland Spain are Indo-European languages, specifically Romance languages.

Afro-Asiatic languages, such as Arabic (including Ceuta Darija) or Berber (mainly Riffian), are spoken by the Muslim population of Ceuta and Melilla and by recent immigrants (mainly from Morocco and Algeria) elsewhere.

In Galicia, the mutual relationship between Galician and Portuguese has caused some controversy, since some linguists, such as Lindley Cintra,[9] consider that they are still dialects of a common language, in spite of the differences in phonology and vocabulary (see reintegrationism).

Others, such as Pilar Vázquez Cuesta,[10] argue that they have become separate languages due to major differences in phonetics and vocabulary usage, and, to a lesser extent, morphology and syntax.

In any case, the respective written standards are noticeably different one from another, partly because of the divergent phonological features and partly due to the usage of Spanish orthographic conventions over the Portuguese ones at the time of Galician standardisation by the early 20th century.[citation needed]

The official (of the Galician Language Institute) and widespread position is that Galician and Portuguese should be considered independent languages.

In addition to the languages which continue to be spoken in Spain to the present day, other languages which have been spoken within what are now the borders of Spain include:

Languages that have been spoken outside Spain but which have roots in Spain are:

There are also variants of these languages proper to Spain, either dialect, cants or pidgins: