Before being enacted in 2014, the territorial reform of the regions has been subject to debate for many years.[2] A permanent name will however only be assigned by 1 October 2016 upon proposal of the region's new regional council.[3]

As the provisional name of the new region, the text of the law specified the hyphenated names of the region's predecessors, Languedoc-Roussillon and Midi-Pyrénées, in alphabetical order. As for most of the merged regions, a permanent name will be proposed by the new regional council by 1 July 2016 and confirmed by the Conseil d'Etat by 1 October 2016.[3] 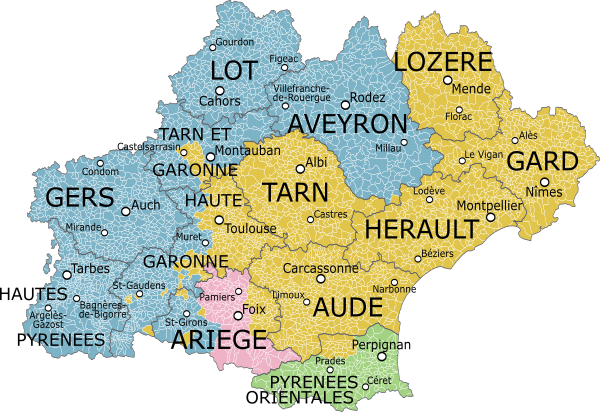 Map of the new region with its thirteen départements, colored according to the historical provinces as they existed until 1790.
Languedoc
Guyenne and Gascony
Comté de Foix
Roussillon