From Infogalactic: the planetary knowledge core
Jump to: navigation, search
This article is about Chinese Lantern festival. For other uses, see Lantern Festival (disambiguation).

The Lantern Festival is a Chinese festival celebrated on the fifteenth day of the first month in the lunisolar Chinese calendar.[1] It marks the final day of the traditional Chinese New Year celebrations,[2] and usually falls on some day in February or March in the Gregorian calendar. As early as the Western Han Dynasty (206 BC-AD 25), it had become a festival with great significance.[3] During the Lantern Festival, children go out at night to temples carrying paper lanterns and solve riddles on the lanterns (simplified Chinese: 猜灯谜; traditional Chinese: 猜燈謎; pinyin: cāidēngmí; Jyutping: caai1 dang1 mai4).[4][5]

In ancient times, the lanterns were fairly simple, and only the emperor and noblemen had large ornate ones.[6] In modern times, lanterns have been embellished with many complex designs.[5] For example, lanterns are now often made in the shape of animals. The lanterns can symbolize the people letting go of their past selves and getting new ones,[7] which they will let go of the next year. The lanterns are almost always red to symbolize good fortune.[8]

In Hong Kong and Taiwan, it is commercialized as the Chinese equivalent of Valentine's Day. It is not to be confused with the Mid-Autumn Festival; which is sometimes also known as the "Lantern Festival" in locations such as Singapore and Malaysia.[3][9]

The first month of the Chinese Luni month is called the yuan month, and night means "Xiao" so it is called the yuan xiao （元宵） Festival in China.[10] The fifteenth day is the first full moon of that lunisolar year. According to Taoist tradition, the fifteenth day of the first lunar month, Shàngyuán, corresponds to the "Official of light" who enjoys colourful and light objects, so there should be heaps and heaps of colorful lanterns hung out for people to appreciate. people will try to solve puzzles on lanterns, eat lots of food like glutinous rice balls named after the festival, ' (also known as tangyuan (simplified Chinese: 汤圆; traditional Chinese: 湯圓; pinyin: tāngyuán) and enjoy a family reunion.[5] 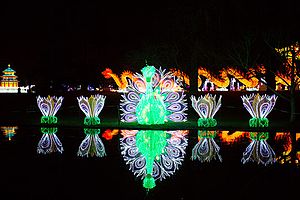 There are many different beliefs about the origin of the Lantern Festival. However, one likely origin is the celebration of "the declining darkness of winter" and community's ability to "move about at night with human-made light," namely, lanterns. During the Han Dynasty, the festival was connected to Ti Yin, the deity of the North Star.[2] 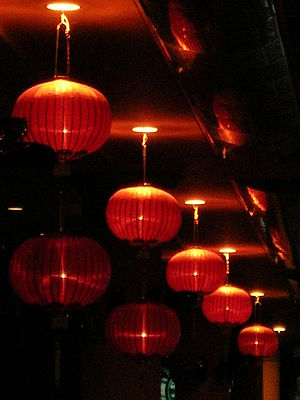 Red lanterns, often seen during the festivities in China

One legend tells us that it was a time to worship Taiyi, the God of Heaven in ancient times. The belief was that the God of Heaven controlled the destiny of the human world. He had sixteen dragons at his beck and call and he decided when to inflict drought, storms, famine or pestilence upon human beings. Beginning with Qin Shi Huang, the first emperor of China, who named China, all the emperors ordered splendid ceremonies each year. The emperor would ask Taiyi to bring favorable weather and good health to him and his people.[11][12]

Wudi of the Han Dynasty directed special attention to this event. In 104 BCE, he proclaimed it to be one of the most important celebrations and the ceremony would last throughout the night.

Another legend associates the Lantern Festival with Taoism. Tianguan is the Taoist god responsible for good fortune. His birthday falls on the fifteenth day of the first lunar month. It is said that Tianguan likes all types of entertainment, so followers prepare various kinds of activities during which they pray for good fortune.[13]

Another legend associates the Lantern Festival with an ancient warrior name Lan Moon, who led a rebellion against the tyrannical king in ancient China. He was killed in the storming of the city and the successful rebels commemorated the festival in his name.[13]

Another legend about the origins of Lantern Festival involves a maid named Yuan-Xiao. In the Han Dynasty, Dongfang Shuo was a favorite adviser of the emperor. One winter day, he went to the garden and heard a little girl crying and getting ready to jump into a well to commit suicide. Dongfang stopped her and asked why. She said she was Yuan-Xiao, a maid in the emperor's palace and that she never had a chance to see her family since she started working there. If she could not have the chance to show her filial piety in this life, she would rather die. Dongfang promised to find a way to reunite her with her family. Dongfang left the palace and set up a fortune-telling stall on the street. Due to his reputation, many people asked for their fortunes to be told but everyone got the same prediction - a calamitous fire on the fifteenth lunar day. The rumor spread quickly.[13]

Everyone was worried about the future and asked Dongfang for help. Dongfang said that on the thirteenth lunar day, the God of Fire would send a fairy in red riding a black horse to burn down the city. When people saw the fairy they should ask for her mercy. On that day, Yuan-Xiao pretended to be the red fairy. When people asked for her help, she said that she had a copy of a decree from the God of Fire that should be taken to the emperor. After she left, people went to the palace to show the emperor the decree which stated that the capital city would burn down on the fifteenth. The emperor asked Dongfang for advice. Dongfang said that the God of Fire liked to eat tangyuan (sweet dumplings). Yuan-Xiao should cook tangyuan on the fifteenth lunar day and the emperor should order every house to prepare tangyuan to worship the God of Fire at the same time. Also, every house in the city should hang red lantern and explode fire crackers. Lastly, everyone in the palace and people outside the city should carry their lanterns on the street to watch the lantern decorations and fireworks. The Jade Emperor would be deceived and everyone would avoid the disastrous fire.[14]

The emperor happily followed the plan. Lanterns were everywhere in the capital city on the night of the fifteenth lunar day. People were walking on the street. Fire crackers kept making lots of noise. It looked like the entire city was on fire. Yuan-Xiao's parents went into the palace to watch the lantern decorations and were reunited with their daughter. The emperor decreed that people should do the same thing every year. Since Yuan-Xiao cooked the best tangyuan, people called the day Yuan-Xiao Festival.

In the early days, young people were chaperoned in the streets in hopes of finding love. Matchmakers acted busily in hopes of pairing couples. The brightest lanterns were symbolic of good luck and hope. As time has passed, the festival no longer has such implications in most of China, but it is still commercialized as the Chinese equivalent of Valentine's Day in Malaysia, Hong Kong, and Taiwan.[9]

Eaten during the Lantern Festival, tangyuan '湯圓'(Rice ball) is a glutinous rice ball typically filled with sweet red bean paste, sesame paste, or peanut butter.[4] The Chinese people believe the round shape of the balls, and the bowls in which they are served symbolize family togetherness, and that eating tangyuan may bring the family happiness and good luck in the new year.[3][5] 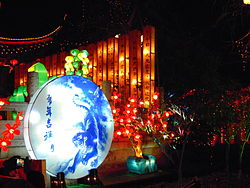 Until the Sui Dynasty in the sixth century, Emperor Yangdi invited envoys from other countries to China to see the colorful lighted lanterns and enjoy the gala performances.[15]

By the beginning of the Tang Dynasty in the seventh century, the lantern displays would last three days. The emperor also lifted the curfew, allowing the people to enjoy the festive lanterns day and night. It is not difficult to find Chinese poems which describe this happy scene.[15]

In the Song Dynasty, the festival was celebrated for five days and the activities began to spread to many of the big cities in China. Colorful glass and even jade were used to make lanterns, with figures from folk tales painted on the lanterns.[citation needed]

However, the largest Lantern Festival celebration took place in the early part of the 15th century. The festivities continued for ten days. Emperor Chengzu had the downtown area set aside as a center for displaying the lanterns. Even today, there is a place in Beijing called Dengshikou. In Chinese, deng means lantern and shi is market. The area became a market where lanterns were sold during the day. In the evening, the local people would go there to see the beautiful lighted lanterns on display.[citation needed]

Today, the displaying of lanterns is still a major event on the fifteenth day of the first lunar month throughout China. Chengdu in southwest China's Sichuan Province, for example, holds a lantern fair each year in Culture Park. During the Lantern Festival, the park is a virtual ocean of lanterns. Many new designs attract large numbers of visitors. The most eye-catching lantern is the Dragon Pole. This is a lantern in the shape of a golden dragon, spiraling up a 38-meter-high pole, spewing fireworks from its mouth. Cities such as Hangzhou and Shanghai have adopted electric and neon lanterns, which can often be seen beside their traditional paper or wooden counterparts. Another popular activity at this festival is guessing lantern riddles (which became part of the festival during the Tang Dynasty).[citation needed] These often contain messages of good fortune, family reunion, abundant harvest, prosperity and love.[citation needed] Just like the pumpkin carved into jack-o'-lantern for Halloween in the western world, Asian parents sometime teach their children to carve empty the inner tubing of Oriental radish /mooli/ daikon into a Cai-Tou-Lantern (simplified Chinese: 营菜头灯; traditional Chinese: 營菜頭燈; pinyin: yíng cai tóu dēng) for the Festival.[citation needed]

This painting, by an imperial court painter in 1485, depicts the Chenghua Emperor enjoying the festivities with families in the Forbidden City during the traditional Chinese Lantern Festival. It includes acrobatic performances, operas, magic shows and setting off firecrackers.