From Infogalactic: the planetary knowledge core
Jump to: navigation, search
For the reconnaissance satellites codenamed "Lanyard", see KH-6. For the plaiting and knotting craft, see Scoubidou. 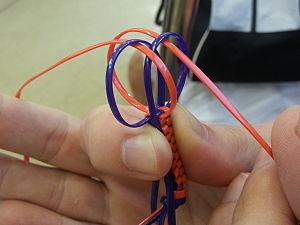 A lanyard is a cord or strap worn around the neck, shoulder, or wrist to carry such items as keys or identification cards.[1] In the military, lanyards were used to fire an artillery piece or arm the fuze mechanism on an air-dropped bomb by pulling out a cotter pin (thereby starting the arming delay) when it leaves the aircraft.[2] Aboard a ship, it may refer to a piece of rigging used to secure or lower objects.[1] 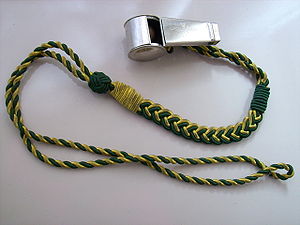 The earliest references to lanyards date from 15th century France: "Lanière" was a thong or strap apparatus.[3] In the French military, lanyards were used to connect a pistol, sword or whistle (for signalling) to a uniform semi-permanently. Lanyards were used by cavalry and naval officers at sea. A pistol lanyard can be easily removed and reattached by the user, but will stay connected to the pistol whether it is drawn or in a holster. In the 1966 Spaghetti Western The Good, The Bad, and The Ugly, one of the main characters, Tuco Ramirez, carries his pistol on a rope cord lanyard. Eli Wallach, the actor who played the part of Tuco, reportedly told director Sergio Leone that it was too difficult to put a pistol into a holster without looking, so Leone put Wallach's pistol on a lanyard.[4]

In the military, lanyards of various colour combinations and braid patterns are worn on the shoulders of uniforms to denote the wearer's qualification or regimental affiliation.[5] In horse regiments, lanyards were worn on the left, enabling a rider to pull a whistle from the left tunic pocket and maintain communication with his troop. Members of the British Royal Artillery wear a lanyard which originally held a key for adjusting the fuzes of explosive shells.[6] 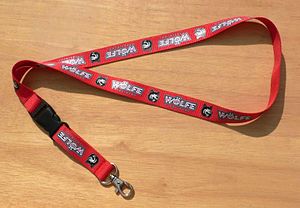 The style, design or material used will vary depending on end-purpose of the lanyard. Lanyard materials include polyester, nylon, satin, silk, polyethylene terephthalate (PET), braided leather or braided paracord.

A USB flash drive with a branded lanyard. Another feature is the black plastic part. This is a predetermined and reattachable breaking point. It is meant to prevent accidental strangulation when the lanyard is worn around the neck.

Lanyards are widely used with small electronic devices such as cameras, MP3 players and USB flash drives to prevent loss or dropping. Electronics designed to take a lanyard usually have a small through-hole built into a corner or edge of the case or anchored to the frame of the device; the corresponding lanyard generally has a loop of thread on the end that is attached to that hole with a simple knot, usually a cow hitch. Some earphones incorporate the audio signal into the lanyard, meaning it doubles up as headphone cords as well. The Wii Remote wrist strap is a form of lanyard, keeping the device attached to a player's arm during the often vigorous movements involved in its use.

Lanyards are commonly used to display badges, tickets or ID cards for identification where security is required, such as businesses, corporations, hospitals, prisons, conventions and trade fairs. Such lanyards are often made of braided or woven fabric with a clip attached to the end. A plastic pouch or badge holder with at least one clear side is attached to the lanyard with the person's name badge or ID card. Occasionally, small items like business cards, pens or tools can be placed behind the badge for easy access. Lanyards can also be used as keychains, particularly in situations where keys can easily be lost, such as gyms, public pools and communal showers.

In these cases, lanyards may be customized with the related name and/or logo of the event, business, or organization. Lanyards can feature a variety of customization techniques including screen-printing, Jacquard loom weaving, heat transfer, and offset printing.

Lanyards are also often attached to dead man's switches or "kill switches" on dangerous machinery, such as large industrial cutting/slicing machines; on vehicles, such as jet-skis or trains; and on exercise treadmills, so that if the operator suddenly becomes incapacitated, their fall will pull on the lanyard attached to their wrist, which will then pull the switch to immediately stop the machine or vehicle.

Some law enforcement officers and members of the military utilize specialized lanyards to keep sidearms from falling to the ground during missions.[7]

Many ID card lanyards have a built-in feature known as a "breakaway" closure. Breakaway lanyards release when pulled or when pressure is applied. This prevents choking or hanging. Lanyards with a breakaway feature are most often used in hospitals and healthcare clinics, schools, nursing homes, child care facilities, or factories that require employees to operate machinery.

Lineman lanyards are used by Lineman utility and other workers to prevent falls, although similar straps are also used recreationally by mountain climbers. This type of lanyard will have a section of heavy duty nylon strapping attached to a metal ring or carabiner which tightens around an attachment point. The strap may be a fixed length or adjustable, and will attach to the wearer to support them against a fixed object or pole.[3]

Certain lanyards are still worn on uniforms as decorations. Among these are the Orange Lanyard in the Military William Order of the Netherlands, and the German Armed Forces Badge of Marksmanship.