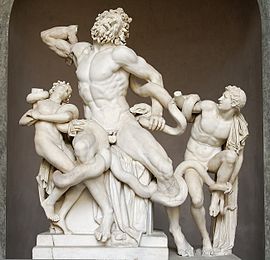 Laocoön and His Sons in the Vatican

Laocoön (/leɪˈɒkoʊ.ɒn/; Ancient Greek: Λαοκόων, IPA: [laokóɔːn]), the son of Acoetes, is a figure in Greek and Roman mythology and the Epic Cycle.[1] He was a Trojan priest who was attacked, with his two sons, by giant serpents sent by the gods. Though not mentioned by Homer, the story of Laocoön had been the subject of a tragedy, now lost, by Sophocles and was mentioned by other Greek writers, though the events around the attack by the serpents vary considerably. The most famous account of these is now in Virgil's Aeneid where Laocoön was a priest of Poseidon (or Neptune for the Romans), who was killed with both his sons after attempting to expose the ruse of the Trojan Horse by striking it with a spear.[2]

Virgil gives Laocoön the famous line "Equō nē crēdite, Teucrī / Quidquid id est, timeō Danaōs et dōna ferentēs", or "Do not trust the Horse, Trojans / Whatever it is, I fear the Greeks even bearing gifts." This line is the source of the saying: "Beware of Greeks bearing gifts."

In Sophocles, however, he was a priest of Apollo, who should have been celibate but had married. The serpents killed only the two sons, leaving Laocoön himself alive to suffer.[3] In other versions he was killed for having committed an impiety by making love with his wife in the presence of a cult image in a sanctuary,[4] or simply making a sacrifice in the temple with his wife present.[5] In this second group of versions, the snakes were sent by Poseidon[6] and in the first by Poseidon and Athena, or Apollo, and the deaths were interpreted by the Trojans as proof that the horse was a sacred object. The two versions have rather different morals: Laocoön was either punished for doing wrong, or for being right.[7] 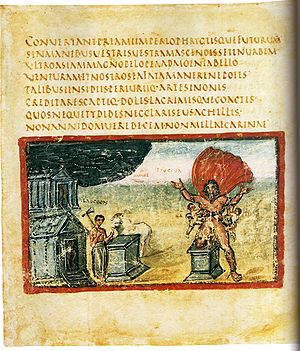 Death of Laocoön from the Vatican Vergil.

The most detailed description of Laocoön's grisly fate was provided by Quintus Smyrnaeus in Posthomerica, a later, literary version of events following the Iliad. According to Quintus, Laocoön begged the Trojans to set fire to the horse to ensure it was not a trick. Athena, angry with him and the Trojans, shook the ground around Laocoön's feet and painfully blinded him. The Trojans, watching this unfold, assumed Laocoön was punished for the Trojans' mutilating and doubting Sinon, the undercover Greek soldier sent to convince the Trojans to let him and the horse inside their city walls. Thus, the Trojans wheeled the great wooden Horse in. Laocoön did not give up trying to convince the Trojans to burn the horse, and Athena makes him pay even further. She sends two giant sea serpents to strangle and kill him and his two sons.[8] In another version of the story, it was said that Poseidon sent the sea serpents to strangle and kill Laocoön and his two sons.

According to Apollodorus, it was Apollo who sent the two sea serpents. Laocoön had insulted Apollo by sleeping with his wife in front of the "divine image".[9]

Virgil used the story in the Aeneid. According to Virgil, Laocoön advised the Trojans to not receive the horse from the Greeks. They disregarded Laocoön's advice and were taken in by the deceitful testimony of Sinon. The enraged Laocoön threw his spear at the Horse in response. Minerva then sent sea-serpents to strangle Laocoön and his two sons, Antiphantes and Thymbraeus, for his actions. "Laocoön, ostensibly sacrificing a bull to Neptune on behalf of the city (lines 201ff.), becomes himself the tragic victim, as the simile (lines 223–24) makes clear. In some sense, his death must be symbolic of the city as a whole," S. V. Tracy notes.[10] According to the Hellenistic poet Euphorion of Chalcis, Laocoön is in fact punished for procreating upon holy ground sacred to Poseidon; only unlucky timing caused the Trojans to misinterpret his death as punishment for striking the Horse, which they bring into the city with disastrous consequences.[11] The episode furnished the subject of Sophocles' lost tragedy, Laocoön.

In Aeneid, Virgil describes the circumstances of Laocoön's death:

The death of Laocoön was famously depicted in a much-admired marble Laocoön and his Sons, attributed by Pliny the Elder to the Rhodian sculptors Agesander, Athenodoros, and Polydorus, which stands in the Vatican Museums, Rome. Copies have been executed by various artists, notably Baccio Bandinelli. These show the complete sculpture (with conjectural reconstructions of the missing pieces) and can be seen in Rhodes, at the Palace of the Grand Master of the Knights of Rhodes, Rome, the Uffizi Gallery in Florence and in front of the Archaeological Museum, Odessa, Ukraine, amongst others.

The marble Laocoön provided the central image for Lessing's Laocoön, 1766, an aesthetic polemic directed against Winckelmann and the comte de Caylus. Daniel Albright reengages the role of the figure of Laocoön in aesthetic thought in his book Untwisting the Serpent: Modernism in Literature, Music, and Other Arts. [cite El Greco painting]

In addition to other literary references, John Barth employs a bust of Laocoön in his novella, The End of the Road. The R.E.M. song "Laughing" references Laocoön, rendering him female ("Laocoön and her two sons"). The marble's pose is parodied in the comic book Asterix and the Laurel Wreath. American author Joyce Carol Oates also references Laocoön in her 1989 novel American Appetites. In Stave V of A Christmas Carol, by Charles Dickens (1843), Scrooge awakes on Christmas morning, "making a perfect Laocoon of himself with his stockings". Barbara Tuchman's The March of Folly begins with an extensive analysis of the Laocoön story. The American feminist poet and author Marge Piercy includes a poem titled, "Laocoön is the name of the figure", in her collection Stone, Paper, Knife (1983), relating love lost and beginning.

In Hector Berlioz opera Les Troyens, the death of Laocoon is a pivotal moment of the first act after Aeneas entrance, sung by eight singers and a double choir ("ottetto et double chœur"). It begins with the verse "Châtiment effroyable" ("frightful punishment").

Compiled by Tracy, 1987:452 note 3, which also mentions a fragmentary line possibly by Nicander.