Lappeenranta (Swedish: Villmanstrand; Russian: Лаппеэнранта) is a city and municipality situated on the shore of the lake Saimaa in South-Eastern Finland, about 30 kilometres (19 miles) from the Russian border. It belongs to the region of South Karelia. With approximately 73,000 inhabitants (31 March 2016) Lappeenranta is the 13th largest city in Finland.[2] The neighboring municipality of Joutseno was consolidated with Lappeenranta on January 1, 2009, and the neighboring municipality of Ylämaa on January 1, 2010. Lappeenranta is known as an international university city in Finland with Lappeenranta University of Technology and Saimaa University of Applied Sciences which together have approximately 13,000 students from 68 countries. Lappeenranta is also a commercial centre of South-East Finland and the meeting point of the EU and Russia, 215 km from both Helsinki and St. Petersburg. Location on the southern shore of Lake Saimaa makes the city the region’s centre for tourism. Lappeenranta is second most visited city in Finland after Helsinki and it competes with Helsinki for the largest share of tax-free sales in Finland. Lappeenranta is a model for renewable energies and a clean living environment. Lappeenranta was the only Finnish city among the 14 finalists in the international Earth Hour City Challenge 2014, organized by WWF.

Lappeenranta was originally formed around a headland pointing to lake Saimaa. In the 16th century, the market place moved from Lappee's old centre Kauskila to the current fortress headland. The first mention of Lapwes, as it was called, is in a privilege charter from 1542 that subjugated the market place under Viborg's authority.

The town was chartered in 1649 by Queen Christina of Sweden, legitimizing the trade in the then popular marketplace of Lapvesi. However, the parliamentary privilege charter and the coat of arms were attested in 1652 after the town layout by Erik Aspegren was affirmed. At the time, Lappeenranta was an important port for tar.

Between 1721 and 1743, Lappeenranta was the capital of Kymmenegård and Savonlinna province.

In 1741, the battle of Villmanstrand was fought between the Swedish and Russian armies in the Russo-Swedish War of 1741–1743. The battle ended in a Russian victory. The town was pillaged, wooden structures including the provincial chancellery were burnt and the ecclesiastical archives damaged.

The municipalities of Lappee and Lauritsala were annexed to Lappeenranta in 1967. Nuijamaa joined in 1989. During the financial downturn of 2009 and 2010, Joutseno and Ylämaa respectively merged into Lappeenranta.

Lappeenranta has numerous schools at almost all levels of education, including the Lappeenranta University of Technology, Saimaa University of Applied Sciences, located in a shared Skinnarila campus of around 8000 students, the Army Academy (branch of the Finnish Defence Forces), South Karelia Vocational College and South Karelia Adult Education Centre.

Lappeenranta is connected to neighbouring cities and municipalities by road, with railways heading north and south from the city. Lappeenranta is located 215 km from Helsinki and 195 km from St. Petersburg. There are multiple daily trains around Finland from the center and to Russia from Vainikkala station. Express train connections: to Helsinki in about 2 hours, and to St. Petersburg in about 1.5 hours on the new Allegro train.

During the summer, when Lake Saimaa and Saimaa Canal are accessible by water, there is a connection by ship from Lappeenranta to Vyborg, Russia. Visa-free canal cruises to Vyborg and St. Petersburg are very popular among all nationalities. 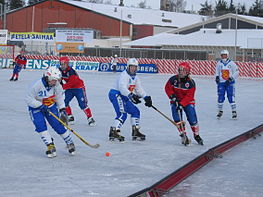 Finland-Norway at the 2004 Women's World Championships

SaiPa is an Ice hockey team playing in the highest level in Finland, SM-liiga. SaiPa was fourth in the national Ice hockey league in the season of 2013-2014. 2014 IIHF Ice Hockey U18 World Championship - Tournament was played Kisapuisto Ice Hall, Lappeenranta & Imatra Ice Hall during April 17 – 27, 2014. United States won the tournament, Czech Republic was second and Canada was the third.

Namika Lappeenranta is a basketball team playing in the highest level in Korisliiga and have won two championships in 2005 and 2006.

NST plays floorball in the Salibandyliiga and Rajaritarit is an American Football team in the Vaahteraliiga.

Lappeenrannan Veiterä, or just Veiterä, plays in Bandyliiga and has been Finnish champions four times. They have been the champions for women and for girls born in 1995 and 1998.[7] The city hosted the first ever Women's Bandy World Championship in 2004 and in 2014 the tournament returns to Lappeenranta.[8]

In women's sports Catz Lappeenranta plays basketball and Pesä Ysit plays Finnish baseball, both in the top leagues of the nation. Catz has won Finnish national basketball championship four times in a row.

Lappeenranta is known as a summer city, mostly due to its closeness to the Lake Saimaa. Europe’s 4th largest lake. The eponymous GoSaimaa (www.gosaimaa.com) provides all the touristic activities in the area. In addition, its inland location means that summers tend to be warmer and winters colder than along the coastal areas.

The proximity of the Russian border is increasingly visible in the number of Russian tourists visiting the city. In fact, Lappeenranta is closer (Template:195 km or 122 mi) to Saint Petersburg than Helsinki, the capital of Finland (220 km or 140 mi). The presence of Russian tourists is noticeable by the many Russian registered cars on the streets and the use of Cyrillic letters in signs of some shops.[citation needed]

Lappeenranta is twinned with:[11]