Larache (also El Araich; Arabic: العرايش; Berber: Leɛrayec or Aàrich: the attic or shed) is an important harbour town in the region of Tanger-Tetouan-Al Hoceima in northern Morocco. The town was probably founded by the Banu Arous tribe, who gave it the name Araich Beni Arous.

In 1471, the Portuguese settlers from Asilah and Tangier drove the inhabitants out of Larache, and again it remained uninhabited until the Saadi Sultan Mohammed ash-Sheikh decided to repopulate it and build a stronghold on the plateau above river Loukos. He constructed a fortress at the entrance to the port as a means of controlling access to the river.

In the 15th century superpower due to their marine expenditures Portugal spoke of Larache as the largest Port.

For a long time, attempts by the Portuguese, Spanish and French to take it met with no success. The Portuguese established the nearby Graciosa fortress in 1489. The Kasbah, which was built in 1491 by Moulay en Nasser, later became a pirate stronghold. In 1610, the town passed to the Spanish, who stayed there until 1689, but who mainly used the ports as trading stops and never really administered the town. Moulay Ismail finally conquest by Siege of Larache (1689) .

Attacks on Larache continued, but it still remained in Muslim hands. In 1765, a French fleet failed in the Larache expedition. In 1829, the Austrians punitively bombarded the city due to Moroccan piracy.[1] Due to the colonisation era Spain took Larache in 1911 and held it for 45 years until 1956. 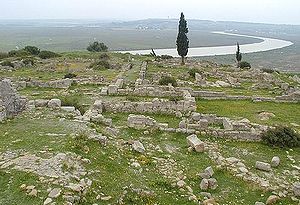 The ruins of Lixus

Lixus is the site of an ancient city located in Morocco just north of the modern seaport of Larache on the bank of the Loukkos River. It was built by a Berber king in 1180 BC. Lixus was one of the Kingdom of Mauretania's ancient cities.

It was settled by the Phoenicians in the 7th century BC. Lixus was part of a chain of Phoenician/Carthaginian settlements; other major settlements further to the south are Chellah[2] and Mogador. When Carthage fell to Ancient Rome, Lixus, Chellah and Mogador were annexed to the Kingdom of Mauretania.

This ancient Amazigh city gradually grew in importance, later coming under Carthaginian domination. After the destruction of Carthage, Lixus fell to Amazigh (Berber) control, reaching its zenith during the reign of the Amazigh king Juba II.

Some ancient Greek writers located at Lixus the mythological garden of the Hesperides, the keepers of the golden apples. The name of the city which was often mentioned by writers from Hanno the Navigator to the Geographer of Ravenna and confirmed by the legend on its coins and by an inscription. The ancients believed this to be the site of the Garden of the Hesperides and of a sanctuary of Hercules, where Hercules gathered gold apples, more ancient than the one at Cadiz, Spain. However, there are no grounds for the claim that Lixus was founded at the end of the second millennium BC. Life was maintained there nevertheless until the Islamic conquest of North Africa by the presence of a mosque and a house with patio with the covered walls of painted stuccos.

Today Larache has a population of approximately 125,008.[2] Periods of Berber, Arab and Spanish rule have left their mark, although the most dominant is the Muslim influence. The layout of the old town is typically Moorish, while houses in the new town seem to be Andalusian in style.

Larache has a Mediterranean climate with heavier rainfall. The summers are moderately hot and sunny - ideal for the city’s beaches - and the winters are wet and cool.

Famous areas and places in Larache