The Large Magellanic Cloud (LMC) is a nearby galaxy, and a satellite of the Milky Way.[5] At a distance of 50 kiloparsecs (≈163,000 light-years),[2][6][7][8] the LMC is the third closest galaxy to the Milky Way, after the Sagittarius Dwarf Spheroidal (~ 16 kiloparsecs) and the putative Canis Major Dwarf Galaxy (~ 12.9 kiloparsecs, though its status as a galaxy is under dispute) lying closer to the center of the Milky Way. The LMC has a diameter of about 14,000 light-years (~ 4.3 kpc) and a mass of approximately 10 billion Sun masses (1010 solar masses), making it roughly 1/100 as massive as the Milky Way.[3] The LMC is the fourth largest galaxy in the Local Group, after the Andromeda Galaxy (M31), the Milky Way, and the Triangulum Galaxy (M33).

In the past, the LMC was often considered an irregular type galaxy. However, it is now recognized as a disrupted barred spiral galaxy. The NASA Extragalactic Database, however, still lists the Hubble sequence type as Irr/SB(s)m). In reality, the LMC contains a very prominent bar in its center, suggesting that it may have previously been a standard barred spiral galaxy before being disrupted, likely by the gravitational tug of the Milky Way, resulting in the disruption of its spiral arms. The LMC's present irregular appearance is likely the result of tidal interactions with both the Milky Way and the Small Magellanic Cloud (SMC).

It is visible as a faint "cloud" in the night sky of the southern hemisphere straddling the border between the constellations of Dorado and Mensa, and it appears from Earth more than 20 times the width of the full moon.[9]

The very first recorded mention of the Large Magellanic Cloud was by the Persian astronomer `Abd al-Rahman al-Sufi Shirazi, (later known in Europe as "Azophi"), in his Book of Fixed Stars around 964 AD.[11][12]

The next recorded observation was in 1503–4 by Amerigo Vespucci in a letter about his third voyage. In this letter he mentions "three Canopes [sic], two bright and one obscure"; "bright" refers to the two Magellanic Clouds, and "obscure" refers to the Coalsack.[13]

Ferdinand Magellan sighted the LMC on his voyage in 1519, and his writings brought the LMC into common Western knowledge. The galaxy now bears his name.[12]

Announced in 2006, measurements with the Hubble Space Telescope suggest the Large and Small Magellanic Clouds may be moving too fast to be orbiting the Milky Way.[14]

The Large Magellanic Cloud is usually considered an irregular galaxy. However, it shows signs of a bar structure, and is often reclassified as a Magellanic-type dwarf spiral galaxy.

The Large Magellanic Cloud has a prominent central bar and a spiral arm.[15] The central bar seems to be warped so that the east and west ends are nearer the Milky Way than the middle.[16] In 2014, measurements from the Hubble Space Telescope made it possible to determine that the LMC has a rotation period of 250 million years.[17]

The LMC was long considered to be a planar galaxy that could be assumed to lie at a single distance from us. However, in 1986, Caldwell and Coulson[18] found that field Cepheid variables in the northeast portion of the LMC lie closer to the Milky Way than Cepheids in the southwest portion. More recently, this inclined geometry for field stars in the LMC has been confirmed via observations of Cepheids,[19] core helium-burning red clump stars[20] and the tip of the red giant branch.[21] All three of these papers find an inclination of ~35°, where a face-on galaxy has an inclination of 0°. Further work on the structure of the LMC using the kinematics of carbon stars showed that the LMC's disk is both thick[21] and flared.[22] Regarding the distribution of star clusters in the LMC, Schommer et al.[23] measured velocities for ~80 clusters and found that the LMC's cluster system has kinematics consistent with the clusters moving in a disk-like distribution. These results were confirmed by Grocholski et al.,[24] who calculated distances to a number of clusters and showed that the LMC's cluster system is in fact distributed in the same plane as the field stars.

File:Satellite Galaxies.JPG
Location of the Large Magellanic Cloud with respect to the Milky Way and other satellite galaxies

Determining a precise distance to the LMC, as with any other galaxy, was challenging due to the use of standard candles for calculating distances, with the primary problem being that many of the standard candles are not as 'standard' as one would like; in many cases, the age and/or metallicity of the standard candle plays a role in determining the intrinsic luminosity of the object. The distance to the LMC has been calculated using a variety of standard candles, with Cepheid variables being one of the most popular. Cepheids have been shown to have a relationship between their absolute luminosity and the period over which their brightness varies. However, Cepheids appear to suffer from a metallicity effect, where Cepheids of different metallicities have different period–luminosity relations. Unfortunately, the Cepheids in the Milky Way typically used to calibrate the period–luminosity relation are more metal rich than those found in the LMC.[25]

Modern 8-meter-class optical telescopes have discovered eclipsing binaries throughout the Local Group. Parameters of these systems can be measured without mass or compositional assumptions. The light echoes of supernova 1987A are also geometric measurements, without any stellar models or assumptions.

Recently, the Cepheid absolute luminosity has been re-calibrated using Cepheid variables in the galaxy Messier 106 that cover a range of metallicities.[6] Using this improved calibration, they find an absolute distance modulus of

By cross-correlating different measurement methods, one can bound the distance; the residual errors are now less than the estimated size parameters of the LMC. Further work involves measuring the position of a target star or star system within the galaxy (i.e. toward or away from the observer).[citation needed]

The results of a study using late-type eclipsing binaries to determine the distance more accurately was published in Nature in March 2013. A distance of 49.97 kpc (163,000 light-years) with an accuracy of 2.2% was obtained.[2] 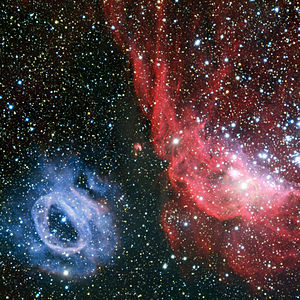 Like many irregular galaxies, the LMC is rich in gas and dust, and it is currently undergoing vigorous star formation activity.[27] It is home to the Tarantula Nebula, the most active star-forming region in the Local Group. 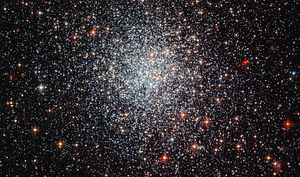 The LMC has a wide range of galactic objects and phenomena that make it aptly known as an "astronomical treasure-house, a great celestial laboratory for the study of the growth and evolution of the stars," as described by Robert Burnham, Jr.[29] Surveys of the galaxy have found roughly 60 globular clusters, 400 planetary nebulae, and 700 open clusters, along with hundreds of thousands of giant and supergiant stars.[30] Supernova 1987a—the nearest supernova in recent years—was also located in the Large Magellanic Cloud. The Lionel-Murphy SNR nitrogen-abundant supernova remnant (SNR) N86 in the Large Magellanic Cloud named by astronomers at the Australian National University's Mount Stromlo Observatory in acknowledgement of Australian High Court Justice Lionel Murphy's interest in science and because of SNR N86's perceived resemblance to his large nose.[31]

There is a bridge of gas connecting the Small Magellanic Cloud (SMC) with the LMC, which is evidence of tidal interaction between the galaxies.[32] The Magellanic Clouds have a common envelope of neutral hydrogen indicating they have been gravitationally bound for a long time. This bridge of gas is a star-forming site.[33]

DEM L316 in the Large Magellanic Cloud consists of two supernova remnants.[42] Chandra X-ray spectra show that the hot gas shell on the upper left contains a high abundance of iron. This implies that the upper left SNR is the product of a Type Ia supernova. The much lower iron abundance in the lower SNR indicates a Type II supernova.[42]

View from the LMC 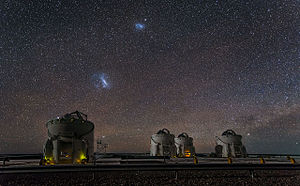 From a viewpoint in the LMC, the Milky Way's total apparent magnitude would be −2.0—over 14 times brighter than the LMC appears to us on Earth—and it would span about 36° across the sky, the width of over 70 full moons. Furthermore, because of the LMC's high galactic latitude, an observer there would get an oblique view of the entire galaxy, free from the interference of interstellar dust that makes studying in the Milky Way's plane difficult from Earth.[45] The Small Magellanic Cloud would be about magnitude 0.6, substantially brighter than the LMC appears to us.[46]