Large Low Shear Velocity Provinces, LLSVPs, also called superplumes, are characteristic structures of parts of the lowermost mantle (the region surrounding the outer core) of the Earth. These provinces are characterized by slow shear wave velocities and were discovered by seismic tomography of the deep Earth. There are two main provinces: the African LLSVP and the Pacific LLSVP. Both extend laterally for thousands of kilometers and possibly up to 1000 km vertically from the core-mantle boundary. The Pacific LLSVP has specific dimensions of 3000 km across and 300 m higher than the surrounding ocean-floor, and is situated over four hotspots that suggest multiple mantle plumes underneath.[1] These zones represent around 3% of the volume of the Earth. Other names for LLSVPs include superwells, thermo-chemical piles, or hidden reservoirs. Some of these names, however, are more interpretive of their geodynamical or geochemical effects, while many questions remain about their nature. 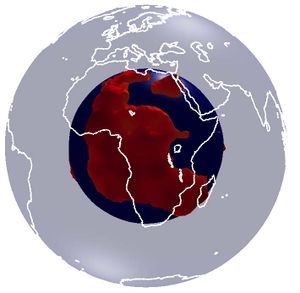 Cartoon of the African LLSVP

LLSVPs were discovered in full mantle seismic tomographic models of shear velocity as slow features in the lowermost mantle beneath Africa and the Pacific. The boundaries of these features appear fairly consistent across models when applying objective k-means clustering.[2] The global spherical harmonic degree two structure is strong and aligns with its smallest moments of inertia along with the two LLSVPs. This means, by using shear wave velocities, the established locations of the LLSVPs are not only verified, a stable pattern for mantle convection emerges. This stable configuration is responsible for the geometry of plate motions at the surface due as well as mantle convection.[3] Another name for the degree two structure, a roughly 200 km thick layer of the lower mantle directly above the core–mantle boundary (CMB), is the D″ ("D double-prime" or "D prime prime").[4] The LLSVPs lie around the equator, but mostly on the southern hemisphere. Global tomography models inherently result in smooth features; local waveform modeling of body waves, however, has shown that the LLSVPs have sharp boundaries.[5] The sharpness of the boundaries makes it difficult to explain the features by temperature alone; the LLSVPs need to be compositionally distinct to explain the velocity jump. Ultra Low Velocity Zones (ULVZ) at smaller scales have been discovered mainly at the edges of these LLSVPs.[6]

The current leading hypothesis for the LLSVPs is the accumulation of the lithospheric subducted oceanic slab. This correspond with the locations of known slab graveyards surrounding the Pacific LLSVP. These graveyards are thought to be the reason for the high velocity zone anomalies surrounding the Pacific LLSVP that is thought to have formed by subduction zones that were around long before for the dispersion, some 750 million years ago, of the supercontinent Rodinia. Aided by the phase transformation, the temperature would partially melt the slabs, to form a dense heavy melt that pools and forms the ULVZ structures at the bottom of the core-mantle boundary closer to the LLSVP than the slab graveyards. The rest of the material is then carried upwards due to chemical buoyancy and contributes to the high levels of basalt found at the mid-ocean ridge. The resulting motion forms small clusters of small plumes right above the core-mantle boundary that combine to form larger plumes and then contribute to superplumes. The Pacific and African LLSVP, in this scenario, are originally created by a discharge of heat from the core (4000°K) to the much colder mantle (2000°K), the recycled lithosphere is only fuel that helps drive the superplume convection. Since it would be difficult for the Earth's core to maintain this high heat by itself, it gives support for the existence of radiogenic elements in the core, as well as the indication that if fertile subducted lithosphere stops subducting in locations preferable for superplume consumption, it will mark the demise of that superplume.[1]

Geodynamic mantle convection models have included compositional distinctive material. The material tends to get swept up in ridges or piles.[6] When including realistic past plate motions into the modeling, the material gets swept up in locations that are remarkably similar to the present day location of the LLSVPs.[7] These locations also correspond with known slab graveyard locations mentioned in the origin section. These types of models, as well as the observation that the degree two structure of the LLSVPs is orthogonal to the path of true polar wander, suggest these mantle structures have been stable over large amounts of time. This geometrical relationship is also consistent with the position of the supercontinent Pangaea, and the formation of the current geoid pattern due to continental break-up from the superswell below.[3] However, the heat from the core is not enough to sustain the energy needed to fuel the superplume(s) located at the LLSVPs. There is a phase transition from perovskite to post-perovskite from the down welling slab(s) that causes an exothermic reaction. This exothermic reaction helps to heat the LLSVP, but it is not sufficient enough to account for the total energy needed to sustain it. So it is hypothesized that the material from the slab graveyard can become extremely dense and form large pools of melt concentrate composed of uranium, thorium, and potassium. These radiogenic elements are what are thought to keep the fire burning, so to speak. So, the appearance and disappearance of slab graveyards predicts the birth and death of an LLSVP, potentially changing the dynamics of all plate tectonics.[1]