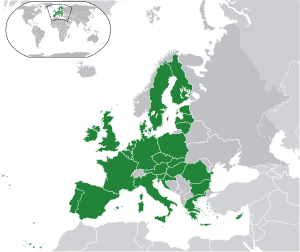 This is a list of the 100 largest cities in the European Union by population within city limits. It deals exclusively with the areas within city administrative boundaries as opposed to urban areas or Larger Urban Zones (metropolitan areas), which are generally larger in terms of population than the main city.

As some cities have very narrow city limits and others very wide, the list may not give an accurate view of the comparative magnitude of different places, and the figures in the list should be treated with caution. For example, the populations of Greater London and Greater Paris constitute the largest urban areas in the EU, but the strict definition of the limits of Paris results in a far lower population shown in the table below. Actually the criteria used to build this list are mixing different level of urbanity, which makes it invalid. It is better to refer to urban zones as other articles of Wikipedia do.

Note: The cities are sorted by the column labelled Official population (actual). Cities in bold are capital cities of their respective countries; Brussels (italics) is the capital of both Belgium and the EU.