Larimer County is one of the 64 counties in the U.S. state of Colorado. As of the 2010 census, the population was 299,630.[1] The county seat and most populous city is Fort Collins.[2] The county was named for William Larimer, Jr.,[3] the founder of Denver.

Larimer County comprises the Fort Collins, CO Metropolitan Statistical Area. The county is located at the northern end of the Front Range, at the edge of the Colorado Eastern Plains along the border with Wyoming.

Larimer County was created in 1861 as one of seventeen original counties in the Colorado Territory; however, its western boundary was disputed. Controversy existed as to whether Larimer County ended at the Medicine Bow Range or at the Continental Divide thirty miles farther west. An 1886 Colorado Supreme Court decision set the boundary at the Continental Divide, although the land between the Medicine Bow Range and the divide was made part of Jackson County in 1909.

Unlike that of much of Colorado, which was founded on the mining of gold and silver, the settlement of Larimer County was based almost entirely on agriculture, an industry that few thought possible in the region during the initial days of the Colorado Gold Rush. The mining boom almost entirely passed the county by. It would take the introduction of irrigation to the region in the 1860s to bring the first widespread settlement to the area. 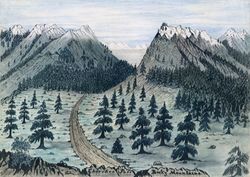 At the time of the arrival of Europeans in the early 19th century, the present-day county was occupied by Native Americans, with the Utes occupying the mountainous areas and the Cheyenne and Arapaho living on the piedmont areas along the base of the foothills. French fur trappers infiltrated the area in the early decades of the 19th century, soon after the area became part of the United States with the Louisiana Purchase and was organized as part of the Missouri Territory. In 1828 William H. Ashley ascended the Cache la Poudre River on his way to the Green River in present-day Utah. The river itself received its name in the middle 1830s from an obscure incident in which French-speaking trappers hid gunpowder along its banks, somewhere near present-day Laporte or Bellvue. In 1848 a group of Cherokee crossed through the county following the North Fork of the Poudre to the Laramie Plains on their way to California along a route that became known as the Cherokee Trail.

The area of county was officially opened to white settlement following negotiations with the Cheyenne and Arapaho in the 1858 Treaty of Fort Laramie, by which time the area was part of the Nebraska Territory. The first U.S. settlers arrived that same year in a party led by Antoine Janis from Fort Laramie. Janis, who had visited the area near Bellvue in 1844 and proclaimed it "the most beautiful place on earth", returned to file his official claim and helped found the first U.S. settlement in present-day Colorado, called Colona, just west of Laporte. Nearly simultaneously, Mariano Medina established Fort Namaqua along the Big Thompson River just west of present-day Loveland. The first irrigation canals were established along the Poudre in the 1860s.

In 1862 the settlement established by Janis became a stagecoach stop along the Overland Stage Route which was established because of threats of attacks from Native Americans on the northern trails in Wyoming. In 1861, Laporte was designated as the first county seat after the organization of the Colorado Territory. In 1862, the United States Army established an outpost near Laporte that was designated as Camp Collins. A devastating flood in June 1864 wiped out the outpost, forcing the Army to seek a better location. At the urging of Joseph Mason, who had settled along the Poudre in 1860, the Army relocated its post downstream adjacent to Mason's land along the Overland stage route. The site of the new post became the nucleus of the town of Fort Collins, incorporated in 1873 after the withdrawal of the Army. By that time, Mason and others had convinced the Colorado Territorial Legislature to designate the new town as the county seat. In 1870, the legislature designated Fort Collins as the location of the state agricultural college (later Colorado State University), although the institution would exist only on paper for another decade while local residents sought money to construct the first campus buildings. In 1873, Robert A. Cameron and other members of the Greeley Colony established the Fort Collins Agricultural Colony, which greatly expanded the grid plan and population of Fort Collins.

One of the primary goals of the early citizens of the county was the courting of railroads. County residents were disappointed when the Denver Pacific Railroad bypassed the county in 1870 in favor of Greeley. The first railroad finally arrived in the county in 1877 when the Colorado Central Railroad extended a line north from Golden via Longmont to Cheyenne. The town council of Fort Collins designated right-of-way through the center of town (and through the campus of the unbuilt college) for the line, creating a contentious issue to this day.

Along the new railroad sprung up the new platted towns of Loveland and Berthoud, named respectively after the president and chief surveyor of the Colorado Central. Likewise Wellington (founded in 1903) was named for a railroad employee. The Greeley, Salt Lake and Pacific Railroad arrived three years later as a subsidiary of the Union Pacific Railroad, with the intention of creating a transcontinental line over Cameron Pass. Although the line was never extended over the mountains, it opened up the quarrying of stone for the railroad at Stout, furnishing another industry for the region. The brief attempt at the mining of gold in the region centered at the now ghost town of Manhattan in the Poudre Canyon.

The early growth of agriculture, which depended highly on direct river irrigation, experienced a second boom in 1902 with the introduction of the cultivation of sugar beets, accompanied by the construction of the large processing plant of the Great Western Sugar Co. in Loveland. In the following decade, the sugar beet industry brought large numbers of German emigrants from the Russian Empire to the county. The neighborhoods of Fort Collins northeast of the Poudre were constructed largely to house these new families.

A significant increase in the agricultural productivity of the region came in the 1930s with the construction of the Colorado Big Thompson Project following the Great Depression, sort of a third boom for the agricultural industry around Fort Collins. This project collected and captured Western Slope water, and carried it over to the Front Range Colorado counties of Boulder, Larimer and Weld, along with an extensive water storage and distribution system, which significantly extended the irrigable growing season and brought substantial additional land under irrigation for the first time. 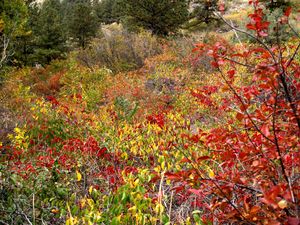 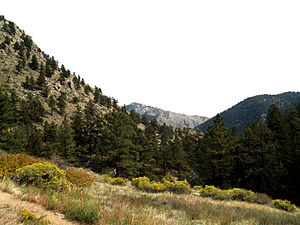 Other features and attractions