The airport has one primary passenger terminal. Departures are accommodated on the upper level, while arrivals at the ground level. A second "VIP terminal" also exists, which is used for visiting Heads of State, some private aviation, and for cargo.

The airport utilises a single large apron for all passenger aircraft. There are 16 jetways (boarding bridges), connecting the main terminal with aircraft, while there is a provision for utilization of shuttle buses to convey passengers during hours of extreme traffic. Infrastructure also features a large engineering hangar, a cargo terminal, and separate facilities for fuelling and provisioning light aircraft. There is a second, smaller apron where cargo aircraft and private aircraft are often parked. There are also spaces for smaller aircraft for flying schools and privately owned aircraft separate from the main two aprons. 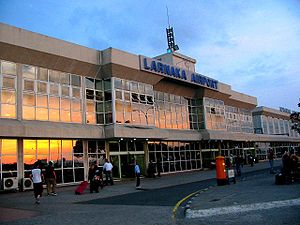 Old Airport terminal closed down in 2008

Larnaca Airport was hastily developed towards the end of 1974 after the invasion of Cyprus by Turkey on 20 July of the same year,[3] which forced the closure of Nicosia International Airport. The site on which it was built (near the Larnaca Salt Lake), had been previously used as an airfield in the 1930s and, subsequently, as a military installation by the British forces. Larnaca International opened on 8 February 1975, with only limited infrastructure facilities and a prefabricated set of buildings comprising separate halls for departures and arrivals. The first airlines to use the new airport were Cyprus Airways using Viscount 800s leased from British Midland and Olympic Airways using NAMC YS-11s. Initially, the runway at Larnaca International was too short for jet aircraft.

Nowadays, Larnaca Airport is used as a hub by passengers travelling between Europe and the Middle East, though between 1994-1996 a twice-weekly Gulf Air flight provided non-stop service to New York JFK airport.[4] The status of Cyprus as a major tourist destination means that air traffic has steadily risen to over 5 million passengers a year. This is double the capacity the airport was first designed for. For this reason, a tender was put out in 1998 to develop the airport further and increase its capacity (see below). Already completed elements of the expansion include a new control tower, fire station, runway extension, and additional administrative offices. The surrounding road network was improved by upgrading the B4 road and by completing the A3 Motorway. 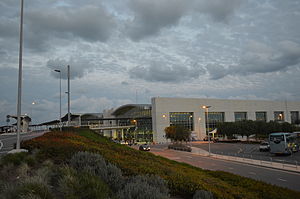 A new junction has been constructed near the new terminal. The new terminal was built some 500–700 m (1,600–2,300 ft) west of the old terminal, adjacent to the new control tower, with new aprons and jetways. The old terminal building is slated to be partially demolished and refurbished as a cargo centre, and is currently used as a private terminal for visiting heads of state, VIPs, and private aircraft operators.

The concept architectural design of the passenger terminal was developed by French architects at Aéroports de Paris (ADP) with Sofréavia in France. Detail and Tender design was completed in Cyprus by 1998, with local architectural office Forum Architects and a large engineering team under the coordination of ADP.[citation needed] The design was later used as a base for the BOT projects of both Larnaca and Pafos International Airports though significant changes were made mainly on "value engineering" grounds. A large amount of controversy spurred by the local media surrounded the granting of the contract when it was put out to tender. A consortium led by BAA and Joannou & Paraskevaides (J&P) construction quickly pulled out when it did not receive assurances from the government of Cyprus that it would receive financial compensation in the event that direct flights were allowed between the Northern Cyprus of the island and the rest of the world. The contract was eventually hastily granted to the next best bidder, the French led 'Hermes' Consortium. This too, was not free of controversy, causing legal challenges by BAA and J&P, and adding further delays to a much needed project.[citation needed]

A €650m upgrade of the Larnaca and Paphos airports has been completed.[5] The international tender was won by Hermes Airports, a French-led group. The consortium is made up of Bouygues Batiment International (22%) Egis Projects (20%), the Cyprus Trading Corporation (a local retail group-10%), Iacovou Brothers (a local contractor-10%), Hellenic Mining (10%), Vancouver Airport Services (10%), Ireland's Dublin Airport Authority (Aer Rianta International) (10%), Charilaos Apostolides (a local construction company-5%) and Nice Côte d'Azur Airport (3%). Hermes Airports built new passenger terminals and plans to extend the runways at both airports under a 25-year concession. 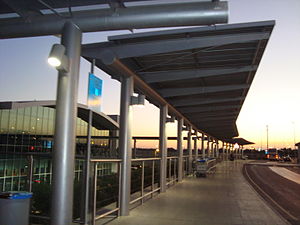 Lane outside the Airport only available for shuttle buses.

The airport can be reached by car, taxi and public transport system. There is a shuttle bus system from/to both Limassol[25] and Nicosia.

Local buses are available at the airport to various locations in Larnaca.