From Infogalactic: the planetary knowledge core
Jump to: navigation, search
For the civil use of this facility and airport information, see Grant County International Airport.

The first operational training unit (OTU) at the base was the 482d Fighter Squadron, which conducted twin-engine fighter training for P-38 Lightning fighters. On 5 April 1943, the 396th Bombardment Group became a second OTU at the base, providing first phase heavy bomber training for the B-17 Flying Fortress with its 592d, 593d, 594th and 595th Bombardment Squadrons.[2][3]

In 1945, base activity was curtailed to standby and for three years, was used to test two famous bomber aircraft: the B-47 and the B-50. Even though Moses Lake AAB (later Moses Lake AFB) was on standby, it was still playing a critical role in the development of the USAF aircraft. In 1949, a B-47 took off from Larson, headed east and began a coast-to-coast speed race.

Moses Lake AFB reopened as a permanent installation on 26 August 1948, being transferred from Air Material Command to the Air Defense Command (ADC). The initial ADC base operating unit was the 2755th Air Base Squadron. Under ADC, the base came under the Western Air Defense Force, headquartered at Hamilton AFB, California.

The base was renamed Larson Air Force Base was named in honor of Major Donald A. Larson, USAAF, in May 1950.[4][5] Born and raised in Yakima, Washington, Larson was a fighter pilot and ace[6] who flew 57 combat missions in Europe during World War II. He was killed in action while assigned to the VIII Fighter Command 505th Fighter Squadron. Larson's P-51D Mustang (AAF Ser. No. 44-13881, nose-name "Mary, Queen of Scotts") was shot down and crashed on 4 August 1944 near Uelzen, Germany. He was buried in the Ardennes American Cemetery at Neuville-en-Condroz, nine miles (14 km) west of Liège, Belgium.

An identical twin born in 1915, Larson enlisted as a flying cadet at McChord Field near Tacoma in April 1941, and completed advanced flight training in California and went overseas in January 1944.[7][8]

The primary mission of Larson-based ADC aircraft was to protect the secret Hanford Atomic Works and the Grand Coulee Dam.

The first ADC flying unit to arrive was the 325th Fighter-Interceptor Group, which arrived on 26 November 1948. The mission of the 325th FIG was to conduct ADC's All Weather Combat Crew Training School. Its operational component, the 317th Fighter Interceptor Squadron, initially flew Northrop P-61 Black Widows, almost immediately transitioning to the North American F-82 Twin Mustang. A second squadron, the 319th Fighter Interceptor Squadron arrived on 2 September 1949, being reassigned from McChord AFB. The 319th also flew the F-82 Twin Mustang.[9][10] The 325th FIG remained at Moses Lake until being reassigned to McChord AFB on 23 April 1950, along with the 317th FIS. The 319th remained until 9 February 1952 when it was reassigned to Suwon Air Base, South Korea flying F-94 Starfires.[9]

The next ADC unit was the 81st Fighter-Interceptor Wing which arrived from 10 November 1949. The 81st FIW flew F-51D/H Mustangs, F-80C Shooting Stars and North American F-86 Sabres from the base. The 81st remained until 5 September 1951 when it was reassigned to NATO and deployed to RAF Shepherds Grove in the United Kingdom.[11][12] During the Korean War, the 116th Fighter-Interceptor Squadron, Washington Air National Guard was called to active duty and activated at Moses Lake. The 116th FIS was deployed as part of the 81st Tactical Fighter Wing to RAF Shepherds Grove.

In September 1948 the Air Force authorized the Air Defense Command to put thirteen temporary radar stations in operation. These stations were in operation by mid-1949. Additional stations were added across the nation in 1949 and 1950. This temporary system was given the name "Lashup" to distinguish it from the interim system for which the Air Force was seeking appropriations. A total of forty-four stations were established under this program. These sites were designated "L." Moses Lake AFB was selected as L-29 in July 1950, equipped with AN/CPS-5, AN/CPS-1, and AN/CPS-4 radars, operated by the 637th Aircraft Control and Warning Squadron until their transfer to Saddle Mountain AFS, Washington (LP-40) in January 1952.

In 1957, Air Defense Command selected Larson AFB as the location of a Semi Automatic Ground Environment (SAGE) Data Center (DC-15). The SAGE system was a network linking Air Force (and later FAA) General Surveillance Radar stations into a centralized center for Air Defense, intended to provide early warning and response for a Soviet nuclear attack. This automated control system was used by NORAD for tracking and intercepting enemy bomber aircraft. In the later versions the system could automatically direct aircraft to an interception by sending instructions directly to the aircraft's autopilot.

Activated on 8 September 1958, DC-15 was commanded by the Spokane Air Defense Sector under the 25th Air Division. The Sector was disestablished on 1 September 1963 due the high costs of operation, the sector merged with the DC-12 Direction Center at McChord AFB under he Seattle Air Defense Sector. After its closure, the SAGE building remained in use by the Air Force for other offices, and after the closure of Larson AFB in 1966, it remained in government hands. In 2000, the building was sold and the company that now either owns or leases the building is "Titan," a company who provides secure off-site storage of business records.

On 21 April 1952, Larson AFB was assigned to the Tactical Air Command (TAC) under TAC's Eighteenth Air Force, which reassigned the 62nd Troop Carrier Wing from McChord AFB, Washington to the base. The Air Defense Command units then became tenants on the base. The 4721st Air Defense Group was activated at Larson in 1956 to centralize supervision and support of 322d FIS and 538th FIS. It was later inactivated as part of ADC closedown at Larson prior to it being assigned to Strategic Air Command (SAC).

For the next eight years, the 62nd was very active, routinely performing troop carrier, air transport, and humanitarian missions on a global scale flying C-124 Globemaster II aircraft. It participated in the airlift of French troops from France to Indochina in Operation Bali-Hai, April–May 1954. Provided a major portion of the airlift needed to construct the distant early warning (DEW) line in northern Alaska and Canada, 1955–1956, and thereafter periodically resupplied the DEW line stations. During the international geophysical year 1957–1958, and subsequently through 1960, supported scientific stations in the Arctic Ocean by landing and airdropping supplies on the drifting ice.

Larson AFB became a Military Air Transport Service (MATS) Continental Division base on 1 July 1957. The 62d TCW was reassigned as part of the transfer of C-124 wings from TAC to MATS.

Strategic Air Command assumed command of Larson AFB in 1960 and established the Fifteenth Air Force's 4170th Strategic Wing (4170th SW). The MATS 62d TCW was reassigned back to McChord AFB on 13 June 1960 where it continues to operate today as the 62d Airlift Wing with C-17 Globemaster III aircraft.

The mission of SAC at Larson AFB was to be a B-52 Stratofortress strategic bombardment wing base. Colonel Clyde W. Owen, USAF, was assigned by SAC as the first commander of the 4170 SW. Crews and aircraft of the 327th Bombardment Squadron arrived from Fairchild AFB, Washington on 13 July 1960 and the first B-52D to arrive was christened "Larson's Lucky Lady".

The 43d Air Refueling Squadron and its KC-135 Stratotankers moved from Davis-Monthan AFB, Arizona to Larson AFB on 15 November 1960, thus completing one of the most advanced air weapon systems in SAC. The mission of the 43rd ARS was to insure the global strike capability of SAC bombers by providing high speed aerial refueling support with modern jet tanker aircraft.

Launch of a Titan I ICBM from Cape Canaveral

The 568th Strategic Missile Squadron was later activated in 1961 as part of the 4170th SW with three missile complexes, each housing three HGM-25A Titan I missiles. The complexes were located at Royal City, Warden, and Odessa.

In November 1964, it was announced that Larson AFB would be closed due to DoD budget reductions which mandated a reduction in B-52 bases and the inactivation of the Titan I ICBM. The ICBM sites were deactivated officially on 25 March 1965.

With the closure of the base, Colonel Owen retired from the Air Force and became the first director of the Port of Moses Lake, overseeing the transfer of the property from the U.S. Government to Grant County International Airport.[13][14][15]

Following the Air Force's departure in 1966, the airfield has continued to support operations from McChord's 62d Airlift Wing over the years, as the wing's C-141, C-130, and currently C-17 aircraft have practiced approaches and both normal landings and tactical assault landings on a regular basis.

The 92nd Air Refueling Wing at Fairchild AFB in Spokane temporarily moved its KC-135 R/T fleet and operations to Moses Lake in 2011 while Fairchild's runway underwent reconstruction and other infrastructure improvements, to include an upgrade to the base's aviation fuel distribution system.[16][17]

Known ADC units and squadrons assigned to Larson were:[9][11] 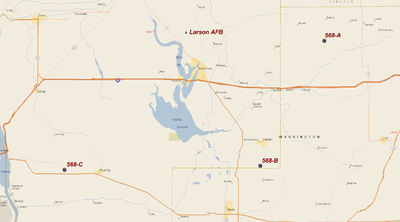 The Titan I ICBM program at Larson was initiated in 1959 when the Walla Walla District of the Army Corps of Engineers set up an area office in October. The contractor broke ground on 1 December 1959 and the sites were turned over to SAC in early April 1961. In May 1964 Secretary of Defense Robert McNamara directed that the phase-out of the Atlas and Titan I missiles be accelerated, and in January 1965 the missiles of the 568th were taken off operational alert. The squadron was inactivated 2 months later.