Larus is a large genus of gulls with worldwide distribution (although by far the greatest species diversity is in the Northern Hemisphere). Many of its species are abundant and well-known birds in their ranges. Until about 2005–2007, most gulls were placed in this genus, but this arrangement is now known to be polyphyletic, leading to the resurrection of the genera Ichthyaetus, Chroicocephalus, Leucophaeus, and Hydrocoloeus (this last had been recognized more often than the other genera) for several species traditionally included in Larus.

They are in general medium to large birds, typically grey or white, often with black markings on the head or wings. They have stout, longish bills and webbed feet.

The taxonomy of the large gulls in the herring and lesser black-backed complex is very complicated, different authorities recognising between two and eight species. See Hybridisation in gulls. 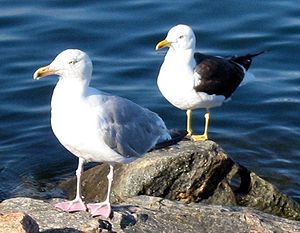 A herring gull (front) and a lesser black-backed gull (behind) in Norway: two species with clear differences.

Fossils of Larus gulls are known since the Middle Miocene, c.20-15 mya; allocation of earlier fossils to this genus is generally rejected nowadays (see below). Biogeography of the fossil record suggests that the genus evolved in the northern Atlantic and spread globally during the Pliocene, when species diversity seems to have been highest as with most seabirds.

The Early Miocene "Larus" desnoyersii (SE France) and "L." pristinus (John Day Formation, Willow Creek, USA) probably do not belong in this genus; the former may be a skua (Olson, 1985).

The circumpolar group of Larus gull species has often been cited as a classic example of the ring species. The range of these gulls forms a ring around the North Pole. The European herring gull, which lives primarily in Great Britain, can hybridize with the American herring gull (living in North America), which can also interbreed with the Vega or East Siberian herring gull, the western subspecies of which, Birula's gull, can hybridize with Heuglin's gull, which in turn can interbreed with the Siberian lesser black-backed gull (all four of these live across the north of Siberia). The last is the eastern representative of the lesser black-backed gulls back in northwestern Europe, including Great Britain. However, the lesser black-backed gulls and herring gull are sufficiently different that they cannot interbreed; thus the group of gulls forms a continuum except in Europe where the two lineages meet. However, a recent genetic study has shown that this example is far more complicated than presented here, and probably does not constitute a true ring species (Liebers et al., 2004).