Las Palmas (/ˌlɑːs ˈpɑːlməs/ or /ˌlɑːs ˈpɑːməs/, Spanish: [las ˈpalmas], locally: [laʰ ˈpalmaʰ]), officially Las Palmas de Gran Canaria,[lower-alpha 1] is a city and capital of Gran Canaria, in the Canary Islands. It is the co-capital (jointly with Santa Cruz de Tenerife) and the most populous city in the autonomous community of the Canary Islands, and the ninth largest city in Spain, with a population of 383,308 in 2010. Nearly half (45.9%) of the people of the island and 18.35% of all inhabitants of the Canary Islands live in this city. It is also the fifth most populous urban area in Spain with a population exceeding 700,000[1] and (depending on sources) ninth or tenth most populous metropolitan area in Spain with a population of between 625,000 and 750,000.[2][3][4][5] Las Palmas is the largest city of the European Union lying outside the European Continent. It is located in the northeast part of the Spanish island of Gran Canaria, about 150 kilometres (93 miles) off the northwestern coast of Africa[6] within the Atlantic Ocean.

Las Palmas enjoys a subtropical climate, with mild to warm temperatures throughout the year. According to a study carried out by Thomas Whitmore, director of research on climatology at Syracuse University in the United States, Las Palmas enjoys "the best climate in the world".[7] 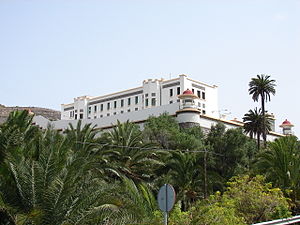 The city was founded by Juan Rejón on 24 June 1478, with the name "Real de Las Palmas". Rejón was head of the invading Castilian army, before engaging in war with the locals. In 1492, Christopher Columbus (Spanish:Cristóbal Colón) anchored in the Port of Las Palmas, and spent some time on the island on his first trip to the Americas. He also stopped on the way back to Spain. The es (Casa de Colón) museum in the es (Vegueta) area of the city is named after him. In 1595 Francis Drake failed to plunder the island. The raid and partial destruction of Las Palmas by the Dutch under Vice Admiral Pieter van der Does in 1599 is considered a major event in the city's history. In 1927, Las Palmas was designated the premier capital of the Canary Island by decree of 30 November 1833,[9][further explanation needed]

The Las Palmas seaport, Puerto de la Luz, known internationally as La Luz Port, benefited greatly from the closure of the Suez Canal during the Arab-Israeli conflict. Due to its situation as nexus of two continents and its importance as a tourist destination, many foreign workers have migrated to the city.

Las Palmas de Gran Canaria is a sister city of San Antonio, Texas in the United States, which was founded in 1718 by about 25 Canary Islanders. Las Palmas is divided into five administrative districts, which in turn are subdivided into districts, not necessarily consistent with the traditional neighborhoods.

Throughout history, Las Palmas received waves of immigrants from mainland Spain and countries from every continent. The majority of the population is Spanish, although there are large North and Sub-Saharan African and Latin American communities, as well as important historical minorities such as Indians (Sindhi) and Koreans and a growing Chinese population. 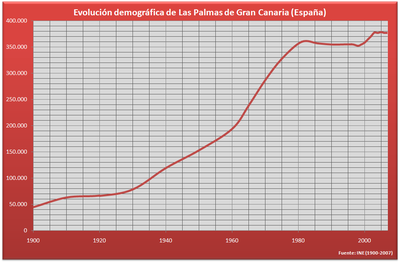 The city also has a wide variety of state and public primary and secondary schools:

Las Palmas offers a variety of theater, cinema, opera, concerts, visual arts and dance performances. The city hosts the Canary Islands Music Festival, the Theatre and Dance and the International Film Festival. The main City Festival, celebrating the foundation of the "City Fiestas de San Juan"[24] is held in June. The Carnival of Las Palmas de Gran Canaria[25] is known not only in Spain but also worldwide, and is one of the main attractions for tourists. The city center of Las Palmas, specifically the Vegueta and Triana neighbourhoods, are included in the tentative List of UNESCO World Heritage Sites.[citation needed] 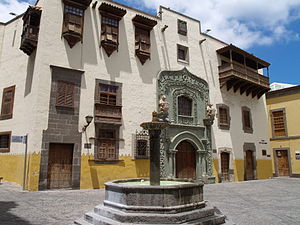 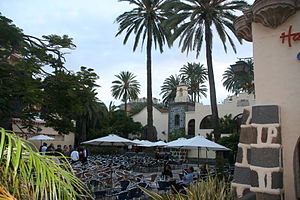 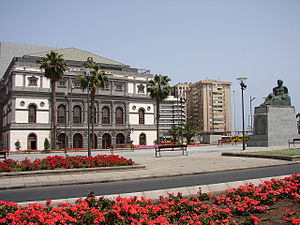 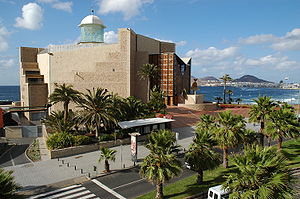 The city has a wide network of libraries. Along with the 11 municipal libraries, there are three specialized centres:

A library is situated in the first floor of Woermann Tower. 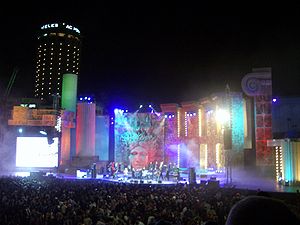 The historic district of Vegueta has regained great popularity in recent years, the meeting place of choice at weekends for many young people, who fill its bars and discos. In the port area are also numerous bars and nightclubs, particularly in the vicinity of Santa Catalina.

The Carnival of Las Palmas de Gran Canaria usually takes place between January and February each year; popular activities include Mogollon dances and queen and the drag queen galas. The WOMAD (World Of Music, Art & Dance) Festival usually occurs in November each year in the capital of Gran Canaria – 2010 marks the sixteenth edition. 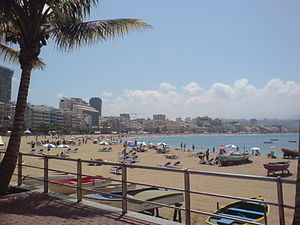 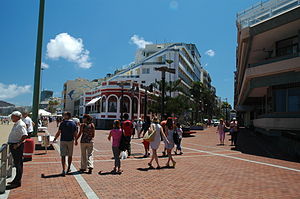 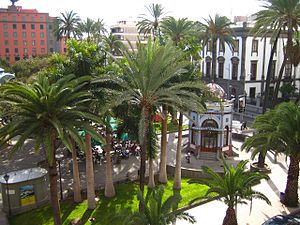 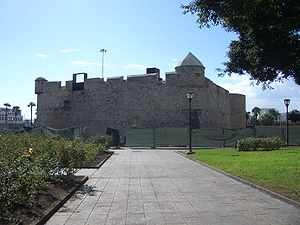 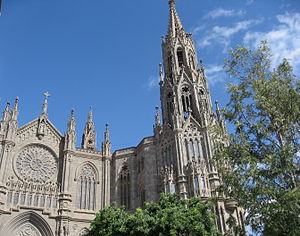 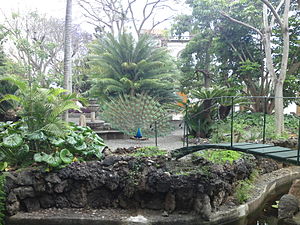 Other sights on the suburbs Road in the city

Urban road infrastructure is overburdened on workdays and in certain areas; the city street plan is not at all rectilinear, and may be confusing even to experienced drivers. However, there are no toll roads; entrances, exits, main streets and important zones are all well-signposted.

Las Palmas, being the centre of the Las Palmas metropolitan area, is the hub for the island's motorway network. The city is linked with three highways: the GC-1 to the south, the GC-2 to the west and GC-3 to the center of the island.

The GC-1 links the capital with Puerto Rico in the south. It is the fastest route from the top of the island to the bottom and vice versa with a speed limit of 120 km/h (75 mph). It is approximately 75 km (47 mi) in length and runs along the eastern and the southern coasts, and is also the second longest superhighway in the Canary Islands. The road provides easy access from the airport to the major cities and resorts, which include Maspalomas and Playa del Inglés. The increase in tourism over the years has necessitated the route's upgrading and widening to cope with traffic growth. The GC-1 begins south of the downtown area of Las Palmas de Gran Canaria, the highway runs within the beach of Las Palmas de Gran Canaria and 2 km (1 mi) south intersects with the GC-2 and later runs with a few clover leaf interchanges and later forms a junction with GC-5 and south, the GC-31.

The GC-2 North Highway connects Las Palmas with the small northern port and village of Agaete. The eastern portion – about 20 km (12 mi) in length – is a superhighway with interchange numbers, the rest of the highway is a two-laned; the western part is also only two-laned and has exit numbers. The highway begins by the beach area of the island, and runs through the downtown area, linking with the GC31 at a roundabout interchange. The freeway runs within the beaches and the coastline of the Atlantic Ocean for the half part but at around the 20th km, it becomes a highway after the unidirectional parclo interchanges and runs within the coastline, it later has several interchanges and several towns as it passes to the northwest and finally, it ends in Agaete.

Las Palmas is served by Gran Canaria Airport, often called Las Palmas Airport (IATA: LPA, ICAO: GCLP). In 2008, it handled 10,212,106 passengers,.[35] This airport handled 33,695,248 kg (74,285,306 lb) of cargo, and is the fourth busiest in Spain.[citation needed] It is also the only airport on the islands with two runways, thus can accommodate up to 53 landings and take-offs per hour. The lengthy runways made the airport an alternative landing site for the NASA Space Shuttle.[36] Also this airport is a base for Binter Canarias and Navegacion y Servicios Aéreos Canarios, airlines which operate regional inter-island flights within the Canary Islands. The Airport is located in the eastern part of the island, about 18 km (11 mi) from the Las Palmas city center.

An airbase of the Spanish Air Force is located to the east of the runways. Beyond several hangars opposite the passenger terminal, the Gando Air Base (Base Aérea de Gando) contains ten shelters situated on the southern end of the eastern runway. Puerto de Las Palmas (Las Palmas Port), also known as 'Puerto de la Luz', is a main port for fishing, commercial, passenger and sports in the northwest of the city. It has been the traditional base for scale and supplying ships on their way through the Middle Atlantic for five centuries. The Port of Las Palmas is not only the first port of the Canary Islands, it is one of the main ports of Spain and the first of the geographical area of West Africa. As the leading port in the mid-Atlantic, it serves as the crossroads between Europe, Africa and America. In 2007, the port received some 11,262 ships; it welcomed a total of 907,782 cruise passengers, a 16.26% increase on 2006. In terms of annual TEU, the port of Las Palmas ranks as the 5th in Spain, and is among the first 15 ports of Europe.[citation needed]

The Port of Las Palmas is the first Mid-Atlantic fishing base, with an annual traffic of more than 4,500 stopovers and with some 400,000 tons of frozen fish processed.[citation needed] Despite experiencing some decline in recent years,[when?] it retains its dominance in the fishing industry over other ports in the Canary Islands. The port provides 175,000 m3 (6,180,067 cu ft) of cold storage facilities.[citation needed] At the foot of pier, special refrigerated containers and preparation rooms for frozen products owned by Trastainer can carry out the entire chain of post-processing and storage of fish, from refrigeration and distribution, to manufacture and supply of industrial ice. The port's EU-approved border inspection post is responsible for inspecting all types of imports and exports between the European Economic Union and its trading partners. 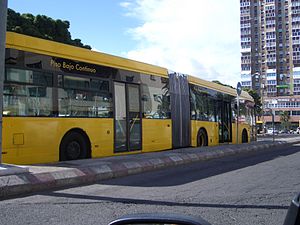 The most important bus lines have frequencies of between 3 and 15 minutes during the day and between 10 and 40 minutes at night; most lines have service throughout the night. The bright yellow buses are known simply as 'guaguas'. The unique tariff, paid directly to the driver, is 1.30 euro. A 10-ride ticket is available for €7.50 at official shops in the city. The Tarjeta Insular (Island Card) which offered a 20% discount on both municipal buses and Global buses was discontinued on 1 January 2011.

Global, inter-hire company, has 119 lines, many to or from the capital. This company was formed in 2000, resulting from the merger of the previous Salcai and interurban lines Utinsa.

There is also the Guagua Turística, which covers the most interesting sites of the city with a guide in several languages.

El Tren de Gran Canaria (TG) is a rail project initially proposed as an alternative way to get from Las Palmas to Maspalomas[38] but was later raised to Agaete extension.

Another project is the Tramway Palmas (Gran Canaria), which would cover the same journey as the bus line 1, with an average frequency of 5 minutes and a journey time of 35 minutes. Las Palmas is home to three major professional sports teams. These are:

Las Palmas was one of the arenas of 2014 FIBA World Championship for Group D, consisting Lithuania, Angola, Korea, Slovenia, Mexico and Australia. Matches were played in the new arena - Palacio de Deportes de Las Palmas with a capacity of about 10,000.

Las Palmas is twinned with: