The AN/SEQ-3 Laser Weapon System or XN-1 LaWS[1] is a directed-energy weapon developed by the United States Navy. The weapon was installed on USS Ponce for field testing in 2014. In December 2014, the United States Navy reported that the LaWS system worked perfectly, and that the commander of the Ponce is authorized to use the system as a defensive weapon.[2]

The LaWS is a ship-defense system that has so far publicly engaged an unmanned aerial vehicle (UAV or drone) and a simulated small-boat attacker. LaWS uses an infrared beam from a solid-state laser array which can be tuned to high output to destroy the target or low output to warn or cripple the sensors of a target. Among the advantages of this device versus projectile weapons is the low cost per shot, as each firing of the weapon requires only the minimal cost of generating the energetic pulse; by contrast ordnance for projectile weapons must be designed, manufactured, handled, transported and maintained, and takes up storage space.

The LaWS is designed to be used against low-end asymmetric threats. Scalable power levels allow it to be used on low-power to dazzle a person's eye to non-lethally make them turn away from a threatening posture, and increase to 30 thousand watts (30 kW) to fry sensors, burn out motors, and detonate explosive materials. Against a vital point on small UAVs, one can be shot down in as little as two seconds. When facing small boats, the laser would target a craft's motor to disable it and make it "dead in the water," then repeating this against others in rapid succession, requiring only a few seconds of firing per boat. Targeting the platform is more effective than individual crewmembers, although the LaWS is accurate enough to target explosive rockets if on board, whose detonations could kill the operators. Against larger aircraft like helicopters, it is able to burn through some vital components, which would cause it to fall and crash.[3]

The LaWS was to be installed on USS Ponce in summer 2014 for a 12-month trial deployment. The Navy spent about $40 million over the past six years on research, development, and testing of the laser weapon. It will be directed to targets by the Phalanx CIWS radar. If tests go well, the Navy could deploy a laser weapon operationally between 2017 and 2021 with an effective range of 1 mi (1.6 km; 0.87 nmi). The exact level of power the LaWS will use is unknown but estimated between 15–50 kW for engaging small aircraft and high-speed boats. Directed-energy weapons are being pursued for economic reasons, as they can be fired for as little as one dollar per shot, while conventional gun rounds and missiles can cost thousands of dollars each. The Navy has a history of testing energy weapons, including megawatt chemical lasers in the 1980s. Their chemicals were found to be too hazardous for shipboard use, so they turned to less powerful fiber solid-state lasers. Other types can include slab solid state and free electron lasers.[6] The LaWS benefitted from commercial laser developments, with the system basically being six welding lasers "strapped together" that, although they don't become a single beam, all converge on the target at the same time. It generates 33 kW in testing, with follow-on deployable weapons generating 60–100 kW mounted on a Littoral Combat Ship or Arleigh Burke-class destroyer to destroy fast-attack boats, drones, manned aircraft, and anti-ship cruise missiles out to a few miles.[7] In the short term, the LaWS will act as a short-range, self-defense system against drones and boats, while more powerful lasers in the future should have enough power to destroy anti-ship missiles; Navy slab lasers have been tested at 105 kW with increases to 300 kW planned. Laser weapons like the LaWS are meant to complement other missile and gun-based defense systems rather than replace them. While lasers are significantly cheaper and have virtually unlimited magazines, their beams can be disrupted by atmospheric and weather conditions (especially when operating at the ocean's surface) and are restricted to line-of-sight firing to continuously keep the beam on target. More conventional systems will remain in place for larger and longer-range targets that require the use of kinetic defense.[8] 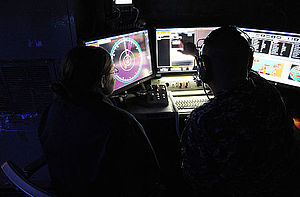 The LaWS was deployed on the Ponce in late August 2014 to the Persian Gulf with the U.S. 5th Fleet.[9][10][11] The deployment is to test the feasibility of a laser weapon in a maritime environment against heat, humidity, dust, and salt water and to see how much power is used. The system has scalable power levels to be able to fire a non-lethal beam to dazzle a suspect vessel, and fire stronger beams to physically destroy a target; range is classified. Although neighboring Iran has threatened to block the Strait of Hormuz out of the Gulf using small boat swarms that the LaWS is able to counter, it was not designed or deployed specifically to be used against any one particular country.[12]

In September 2014, the LaWS was declared an operational asset, so the ship commander has permission to use it for self-defense. Humans are not a target of the weapon under stipulations of the Convention on Certain Conventional Weapons, but targets do include UAVs, helicopters, and fast patrol craft. Rules of engagement (ROE) have been developed for its use, but details have not been released. The Navy has released video of the LaWS on deployment disabling a ScanEagle UAV, detonating a rocket propelled grenade (RPG), and burning out the engine of a rigid hull inflatable boat (RHIB). Officials said it is working beyond expectations. Compared to hundreds of thousands or millions of dollars for a missile, one laser shot costs only 59 cents. Composed of commercial laser components and proprietary Navy software, it is powered and cooled by a "skid" through a diesel generator, separate from the ship's electrical systems, giving greater efficiency relative to power provided of 35 percent. Mounted on the Ponce's superstructure above the bridge, its powerful optics are also useful as a surveillance tool that can detect objects at unspecified but "tactically significant ranges"; sailors have equated its surveillance abilities to having the Hubble telescope at sea. Sailors are using it for targeting and training daily, whether to disable or destroy test targets or for potential target identification. The system is operated through a flat screen monitor and a gaming system-like controller integrated into the ship's combat system, so anyone with experience playing common video games can operate the weapon. It has functioned well against adverse weather, able to work in high humidity and after a dust storm. However, the system is not expected to work during harsh sandstorms and has not been tested in such conditions because "it didn't make much sense to", but threats would also not be expected to be operational under the same conditions. Deployments on other ships are being examined and although the LaWS was planned to remain deployed for one year,[13][14][15] it performed so well that fleet leadership decided to keep it on the Ponce as long as it was at sea, potentially into 2017.[16]

The Office of Naval Research (ONR) is developing a laser weapon similar to the LaWS for use on ground vehicles for the U.S. Marine Corps as part of the Ground-Based Air Defense Directed Energy On-The-Move (G-BAD DE OTM) program. Like the naval LaWS, the ground-based system is meant to be an efficient way to protect against UAVs and supersonic missiles. The ONR is adapting the system to be installed on a Humvee or the Joint Light Tactical Vehicle (JLTV). Tests will be conducted in late 2014 with 10 kW of power, with an increase to 30 kW by 2016.[17] On August 13, 2014, Raytheon was awarded an $11 million contract to adapt a tactical laser weapon system to a vehicle-based laser device. Components have been tested to demonstrate detection and fire control functions of the system, with the compact phased array radar detecting and tracking air targets. The company will deliver a laser with a minimum power output of 25 kW using planar waveguide (PWG) technology, which is about the size and shape of a 12-inch ruler, that can generate sufficient power to effectively engage small aircraft while being small, light, and rugged enough to be used on mobile platforms. Intercept tests will evaluate detection and tracking to firing, battle-damage assessments, and effects on the test vehicle.[18] Unlike the U.S. Army High Energy Laser Technology Demonstrator (HEL-TD) program to develop a truck-mounted laser for 'Counter Rocket, Artillery, and Mortar' (C-RAM) duties while stationary, the G-BAD seeks a short-range laser that can fire while moving and maneuvering with Marine air-ground task forces. The Navy requires a laser capable of firing at full power for two minutes, followed by a 20-minute recharge to 80 percent total capacity. It will weigh 2,500 lb (1,100 kg) consisting of a volume-surveillance radar, command and control (C2), and the high-energy laser weapon. Demonstrations will likely occur on an expanded-capacity Humvee, with the operational result being a 50 kW weapon mounted on a JLTV.[19] In November 2014, it was mentioned that the Royal Navy would be also pursuing a similar project.[20]