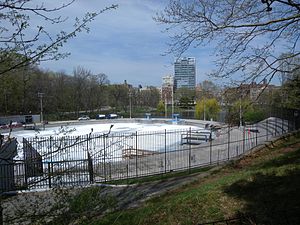 Looking down from East Drive

Lasker Rink is located in the northern part of Central Park in the New York City borough of Manhattan. between 106th and 108th Streets. It is just south of the Farmers Gate entrance on 110th Street and between Harlem Meer and the East Drive.[1] It opened in 1966 and is known by New Yorkers as less crowded and more economical than Wollman Rink.

Lasker is used as a swimming pool in the summer and a hockey rink during the winter, the only such convertible facility of this type.[1] In the winter, Lasker Rink is open from October through March, for public skating and skating schools. 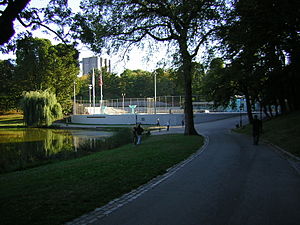 Looking up from Harlem Meer