listen)) is the capital of the province of Latina in the Lazio region, in central Italy. As of 2011[update], the city has 115,895 inhabitants and is thus the second-largest city of the region, after the national capital Rome. It was founded in 1932 under the fascist administration, as Littoria, when the area surrounding it, which had been a swamp since antiquity, was drained. 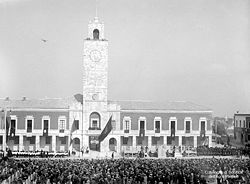 The inauguration of Littoria in 1932.

Latina was founded by Benito Mussolini on 30 June 1932 as Littoria, named for the fascio littorio. The city was inaugurated on 18 December of the same year. Littoria was populated with settlers coming mainly from Friuli and Veneto, who formed the so-called Venetian-Pontine community (today surviving only in some peripherical boroughs). The edifices and the monuments, mainly in rationalist style, were designed by famous architects and artists such as Marcello Piacentini, Angiolo Mazzoni and Duilio Cambellotti.

In 1934 it became a provincial capital and, after World War II, renamed Latina in 1946. With the arrival of other people mostly from Lazio itself, the original Venetian-like dialect was increasingly substituted by a form of Romanesco dialect.

The city coat of arms is a blue shield with a stylized drawing of the City Hall Clock Tower in the middle, standing on a field of green, and flanked by two stalks of wheat tied at the base with a red ribbon engraved with the motto "LATINA OLIM PALUS" ("Latina, once a swamp") in Latin. The shield is surmounted by a mural crown. The arms combine the three colors of the Flag of Italy (red, white, and green) with the "Azzurro Savoia" (the blue of the House of Savoy).

The city has some pharmaceutical, chemical industry, cheese production and has a strong service sector. Latina is also an important centre for agriculture (vegetables, flowers, sugar, fruit, cheese and derivates).

Latina is located in the Province of Latina, part of the southern section of the region of Lazio. The city is about 62 kilometres (39 miles) south of Rome The municipality borders on Aprilia, Cisterna di Latina, Nettuno, Pontinia, Sabaudia, Sermoneta and Sezze.

Latina has a Mediterranean climate (Köppen climate classification Csa) like most of southern Italy.

The Italian film My Brother Is an Only Child is set in Latina.[2]

Latina is twinned with: