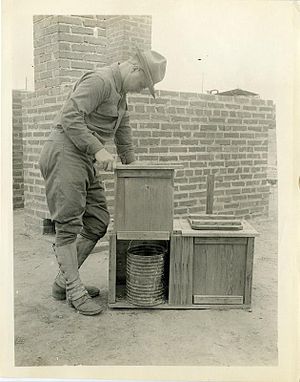 The word latrine can refer to a toilet or a simpler facility which is used as a toilet within a sanitation system. It can be a communal trench in the earth in a camp, a hole in the ground (pit), or more advanced designs, including pour-flush systems. Latrines are still commonly used in emergency situations, as well as in army camps.

The term is derived from the Latin lavatrina, meaning bath. It is nowadays still commonly used in the term "pit latrine". For most people, it has the connotation of something being less advanced and less hygienic than a toilet. It is typically used to describe communal facilities, such as the shallow-trench latrines used in emergency situations, e.g. after an earthquake, flooding event or other natural disaster. 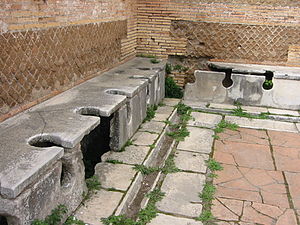 Roman public latrine found in the excavations of Ostia Antica; unlike modern installations, the Romans saw no need to provide privacy for individual users. 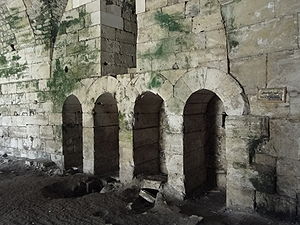 A Pit latrine is a simple and inexpensive toilet, minimally defined as a hole (pit) in the ground. More sophisticated pit latrines may include a floor plate, or ventilation to reduce odor and fly and mosquito breeding (called ventilated improved pit latrine or "VIP latrine").[1] Other types of pit latrines may include the Reed Odourless Earth Closet (ROEC), Arborloos (a very simple type of composting toilet) or the twin pit pour-flush pit latrine, popularized by Sulabh International.

In a location with no functioning toilet, a latrine or trench toilet is typically set. It typically consists of a pit or a trenche in the ground, 4 feet (1.2 m) to 5 feet (1.5 m) deep and 4 feet (1.2 m) to 20 feet (6.1 m) long. Many military units, if intended for extended use, have primitive shelters and seating placed over the pits. A pit is typically kept well away from any water sources to minimize possible contamination. After prolonged use, a pit is typically buried.[citation needed]

A slit-trench latrine consists of a relatively shallow trench which is narrow enough to stand with one leg on either side (for the slit-trench latrine). This type is used either by squatting, with the users' legs straddling the pit, or by various arrangements for sitting or leaning against a support structure. Such support may vary from the simplest forms such as a log, plank, branch or similar arrangement placed at right angles to the long axis of the pit. This type of latrine is not commonly found in developing countries but can be used for emergency sanitation.

The shallow-trench latrine is similar to the slit-trench latrine but is wider (200-300mm wide) than the latter. It is also shallow, with a depth of about 150 mm. This type of latrine is often used in the initial phases of emergencies and is a simple improvement on open defecation fields.[2]  A rule of thumb in emergency sanitation provision is to allow 0.25 m2 of land per person per day. This means 2,500m2 per 10,000 people per day, or nearly two hectares per week. Men’s and women’s areas should always be separated.[2]