The method had already arisen by medieval times, and has been used for centuries in many different cultures. It is still being taught in certain curricula today.[2][3]

As an example, let's consider the multiplication of 58 with 213. After writing the multiplicands on the sides, consider each cell, beginning with the top left cell. In this case, the column digit is 5 and the row digit is 2. Write their product, 10, in the cell, with the digit 1 above the diagonal and the digit 0 below the diagonal (see picture for Step 1). 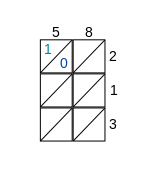 After all the cells are filled in this manner, the digits in each diagonal are summed, working from the bottom right diagonal to the top left. Each diagonal sum is written where the diagonal ends. If the sum contains more than one digit, the value of the tens place is carried into the next diagonal (see Step 2). 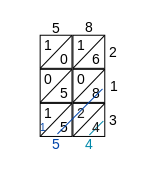 Numbers are filled to the left and to the bottom of the grid, and the answer is the numbers read off down (on the left) and across (on the bottom). 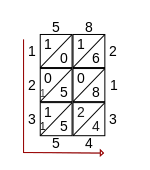 The lattice technique can also be used to multiply decimal fractions. For instance, to multiply 5.8 by 2.13, a vertical line could be drawn straight down from the decimal in 5.8, and a horizontal line straight out from the decimal in 2.13. The lines are extended until they intersect, at which point they merge and follow the diagonal[examples needed]. The positioning of this diagonal line in the final result is the location of the decimal point.[1]

Lattice multiplication has been used historically in many different cultures. It is not known where it arose first, nor whether it developed independently within more than one region of the world.[4] The earliest recorded use of lattice multiplication:[5]

The mathematician and educator David Eugene Smith asserted that lattice multiplication was brought to Italy from the Middle East.[6] This is reinforced by noting that the Arabic term for the method, shabakh, has the same meaning as the Italian term for the method, gelosia, namely, the metal grille or grating (lattice) for a window.

It is sometimes erroneously stated that lattice multiplication was described by Muḥammad ibn Mūsā al-Khwārizmī (Baghdad, c. 825) or by Fibonacci in his Liber Abaci (Italy, 1202, 1228).[7] In fact, however, no use of lattice multiplication by either of these two authors has been found. In Chapter 3 of his Liber Abaci, Fibonacci does describe a related technique of multiplication by what he termed quadrilatero in forma scacherii (“rectangle in the form of a chessboard”). In this technique, the square cells are not subdivided diagonally; only the lowest-order digit is written in each cell, while any higher-order digit must be remembered or recorded elsewhere and then "carried" to be added to the next cell. This is in contrast to lattice multiplication, a distinctive feature of which is that the each cell of the rectangle has its own correct place for the carry digit; this also implies that the cells can be filled in any order desired. Swetz [8] compares and contrasts multiplication by gelosia (lattice), by scacherii (chessboard), and other tableau methods.

Other notable historical uses of lattice multiplication include:[5]