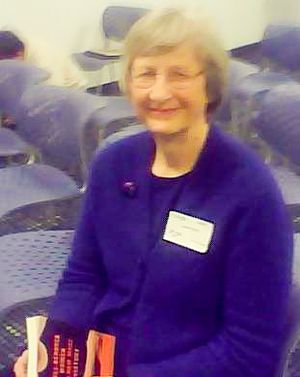 Laurel Thatcher Ulrich (born July 11, 1938)[1] is an American historian of early America and the history of women and a professor at Harvard University.[2] Her innovative and widely influential approach to history has been described as a tribute to "the silent work of ordinary people"—an approach that, in her words, aims to "show the interconnection between public events and private experience."

Ulrich was born in Sugar City, Idaho to John Kenneth Thatcher, schoolteacher and superintendent as well as state legislator and farmer; and Alice Siddoway Thatcher.[1] She graduated from college at University of Utah, majoring in English and journalism, and gave the valedictory speech at commencement.[1]

Many years later, she earned a master's degree in English at Simmons College (1971) and a doctorate in history at the University of New Hampshire (1980).[1]

In a 1976 scholarly article about little-studied Puritan funeral services, Ulrich included the phrase "well-behaved women seldom make history."[3][4] The phrase was picked up and soon went viral, being widely quoted and printed across the country. It continues to be seen on greeting cards, T-shirts, mugs, plaques, and bumper stickers. She recounted how her now-famous quote has taken on a life of its own in an October 2007 interview: "It was a weird escape into popular culture. I got constant e-mails about it, and I thought it was humorous. Then I started looking at where it was coming from. Once I turned up as a character in a novel — and a tennis star from India wore the T-shirt at Wimbledon. It seemed like a teaching moment — and so I wrote a book using the title."[5] Well-Behaved Women examines the ways in which women shaped history, citing examples from the lives of Rosa Parks, Christine de Pizan, Elizabeth Cady Stanton, Harriet Tubman, and Virginia Woolf.

A Midwife's Tale examines the life of Northern New England midwife Martha Ballard, and provides a vivid examination of ordinary life in the early American republic, including the role of women in the household and local market economy, the nature of marriage and sexual relations, aspects of medical practice, and the prevalence of violence and crime.

Ulrich's revelatory history was honored with the Pulitzer Prize. A Midwife's Tale also received the Bancroft Prize, the John H. Dunning Prize, the Joan Kelly Memorial Prize, the Berkshire Conference of Women Historians Book Prize, the Society for Historians of the Early Republic Book Prize, the William Henry Welch Medal of the American Association for the History of Medicine, and the New England Historical Association Award. A Midwife's Tale was later developed into a documentary film for the PBS series American Experience, with Ulrich serving as a consultant, script collaborator, and narrator.

The book became a landmark in women's labor history since it provides scholars with rich insights into the life of a lay American rural healer around 1800.[6] It rests not on the observations of outsiders, but on the words of the woman herself. At first glance, Ballard's encoded, repetitive, and quotidian diary often appears trivial, but as Ulrich found, "it is in the very dailiness, the exhaustive, repetitious dailiness, that the real power of Martha Ballard's book lies... For her, living was to be measured in doing."[6]:9 By knitting together "ordinary" sources to produce a meaningful, extraordinary socio-cultural narrative, Ulrich shows how a skilled practitioner functioned within the interstices of the private and public spheres.

A Midwife's Tale was not only methodologically influential for scholars, but also theoretically important. By showing clearly the economic contributions that midwives made to their households and local communities, and demonstrating the organizational skill of multitasking as a source of female empowerment, the book revises the understanding of prescribed gender roles. While A Midwife's Tale is obviously limited in terms of time (1785–1812) and place (rural Maine), it has attracted sustained attention of historians – especially those interested in gender relations and wage-earning, the economic value of domestic labor, and women's work before industrialization.[6]

Ulrich self-identifies as an active feminist and Mormon, and has written about her experiences.[7] She also co-edited (with Emma Lou Thayne) All God's Critters Got a Place in the Choir, a collection of essays about the lives of Mormon women. Ulrich was a founding member of the Exponent II, an independent publication on the experience of Mormon women.

In late 1992, Brigham Young University's board of trustees vetoed without comment a BYU proposal to invite Ulrich to address the annual BYU Women's Conference. Ulrich did give an address at BYU in 2004.[8]

At Harvard, Ulrich is actively involved in The Church of Jesus Christ of Latter-day Saints. She is the adviser for the undergraduate Latter-day Saint Student Association, the Mormon campus club, and teaches an Institute of Religion class.[citation needed]