Laurium or Lavrio (Modern Greek: Λαύριο; Ancient Greek: Λαύριον; before early 11th century BC: Θορικός Thorikos; from Middle Ages until 19th century: Εργαστήρι Ergastiri) is a town in southeastern part of Attica, Greece. It is the seat of the municipality of Lavreotiki.[2] Laurium was famous in Classical antiquity for silver mining, which was one of the chief sources of revenue of the Athenian state. The metallic silver was mainly used for coinage. It is a sea port of much less importance than nearby Piraeus.

It is located about 60 km SE of Athens, SE of Keratea and N of Cape Sounio. Laurium is situated on a bay overlooking the island of Makronisos (ancient times: Helena) in the east. The port is in the middle and gridded streets cover the residential area of Lavrio. GR-89 runs through Lavrio and ends south in Sounio.

Map of the mines of Laurion 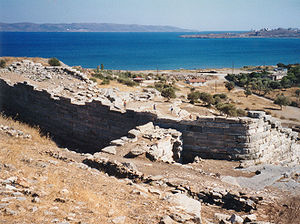 Ruins of the theatre at Thorikos 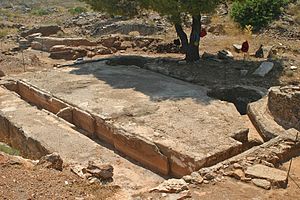 Washing table at the mines of Laurion 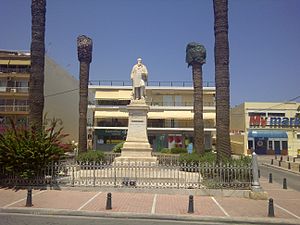 In the 6th century BC, under Peisistratus, systematic exploitation of mineral resources began.

After the battle of Marathon, Themistocles persuaded the Athenians to devote the anticipated revenue derived from a major silver vein strike in the mines of Laurion circa 483 BC to expanding the Athenian fleet to 200 triremes, and thus laid the foundation of the Athenian naval power. The mines, which were the property of the state, were usually farmed out for a certain fixed sum and a percentage on the working; slave labour was exclusively employed. As many as 20,000 slaves were employed at the height of the mining. A silver mint (Argyrocopeum) was at Laurion.

Towards the end of the 5th century, the output fell, partly owing to the Spartan occupation of Decelea. But the mines continued to be worked, though Strabo records that in his time the tailings were being worked over, and Pausanias speaks of the mines as a thing of the past. The ancient workings, consisting of shafts and galleries for excavating the ore, and washing tables for concentrating the ore, may still be seen at many locations. There were well engineered tanks and reservoirs to collect rainwater for washing the ore since abundant supplies from streams or rivers was impossible at the site. The mines were reworked in the early 20th century by French and Greek companies, but mainly for lead, manganese and cadmium. The population of the modern town was 10,007 in 1907.

The Eleftherios Venizelos International Airport is 35 km away from Lavrio or about 30 minutes drive. Lavrio is connected to Athens by car using the Lavrio/Sounio Leoforos (Highway) and then Attiki Odos. This trip takes about an hour. A quite convenient solution to go to Athens is to "park and drive". Drive from Lavrio to Koropi Train Station and there take the train 'proastiakos' or metro that goes straight to Athens center. (30 minutes drive + 30 minutes train)

Lavrio was the terminal station of the Athens-Lavrion Railway, which was abandoned in 1957.

The mining town of Laurium, Michigan was named after the famous Greek Laurium.

Laurium hosts the football club Olympiacos Laurium with earlier presence in Gamma Ethniki and the basketball club Lavrio B.C. with presence in A1 Ethniki.