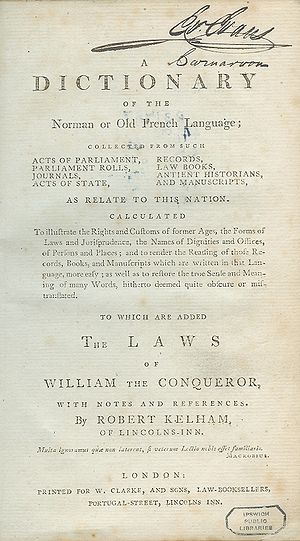 Law French is an archaic language originally based on Old Norman and Anglo-Norman, but increasingly influenced by Parisian French and, later, English. It was used in the law courts of England, beginning with the Norman Conquest by William the Conqueror. Its use continued for several centuries in the courts of England and Ireland.

The earliest known documents in which French is used specifically as a vehicle for discourse on English law date from the third quarter of the thirteenth century. They are

In these works we see an already sophisticated technical language well equipped with its own terminology. This includes many words which are of Latin origin but whose forms have been worn down and distorted in a way which suggests that they already possessed a long history of French usage; examples include avoeson 'right of nominating a parish priest' (Latin advocationem), neife 'female serf' (Latin nativa) and essoyne or essone 'circumstance giving exemption from a royal summons' (Latin sunnis, later replaced by essonia which is simply a reintroduction into Latin from the French form).

Until the early fourteenth century, Law French largely coincided with the French used as an everyday language by the upper classes. As such, it reflected some of the changes undergone by the northern dialects of mainland French during the period. Thus, in the documents mentioned above, 'of the king' is rendered as del rey, whereas by about 1330 it had become du roi (as in modern French) or du roy.[3] During that century, however, this vernacular French suffered a rapid decline; the Pleading in English Act 1362 ("Statute of Pleading") acknowledged this change by ordaining that thenceforward court proceedings be conducted in English, which eventually developed into Legal English. From that time, Law French lost most of its status as a spoken language. It remained in use for the 'readings' (lectures) and 'moots' (academic debates), held in the Inns of Court as part of the education of young lawyers, but essentially it quickly became a written language alone; it ceased to acquire new words, its grammar degenerated (by about 1500 gender was often neglected, giving rise to such absurdities as une home ('a (feminine) man') or un feme ('a (masculine) woman'), and its vocabulary became increasingly English, as it was used solely by English, Welsh and Irish lawyers and judges who often spoke no real French.

In the seventeenth century, the moots and readings fell into neglect, and the rule of Oliver Cromwell, with its emphasis on removing the relics of archaic ritual from legal and governmental processes, struck a further blow at the language. Even before then, in 1628, Sir Edward Coke acknowledged in his preface to the First Part of the Institutes of the Law of England that Law French had almost ceased to be a spoken tongue. It was still used for case-reports and legal text-books until almost the end of the century, but only in an extraordinarily debased form. A frequently quoted example of this ultimate degeneracy comes from one of Chief Justice Sir George Treby's marginal notes in an annotated edition of Dyer's Reports, published 1688:

("Richardson, Chief Justice of Common Bench at the Assizes at Salisbury in Summer 1631. There was an assault by a prisoner there condemned for felony; who, following his condemnation, threw a brickbat at the said Justice, which narrowly missed. And for this, an indictment was immediately drawn by Noy against the prisoner, and his right hand was cut off and fastened to the gibbet, on which he himself was immediately hanged in the presence of the Court.")[4]

The post-positive adjectives in many legal noun phrases in English—attorney general, fee simple — are a heritage from Law French. Native speakers of French may not understand certain Law French terms not used in modern French or replaced by other terms. For example, the current French word for "mortgage" is hypothèque. Many of the terms of Law French were converted into modern English in the 20th century to make the law more understandable in common-law jurisdictions. However, some key Law French terms remain, including the following: