In Protestant Christianity, the relationship between Law and Gospel—God's Law and the Gospel of Jesus Christ—is a major topic in Lutheran and Reformed theology. In these traditions, the distinction between the doctrines of Law, which demands obedience to God's ethical will, and Gospel, which promises the forgiveness of sins in light of the person and work of Jesus Christ, is critical. It is used as a hermeneutical principle of biblical interpretation and a guiding principle in homiletics (sermon composition) and pastoral care. It is the supersession of the Old Covenant (including traditional Jewish law, or halakha) by the New Covenant and Christian theology.

Other Christian groups have a view on the issue as well, or more generally views of the Old Covenant, though it has not usually been as hotly debated or rigorously defined as in the Lutheran and Reformed traditions.

A specific formulation of the distinction of Law and Gospel was first brought to the attention of the Christian Church by Martin Luther (1483–1546), and laid down as the foundation of evangelical Lutheran biblical exegesis and exposition in Article 4 of the Apology of the Augsburg Confession (1531): "All Scripture ought to be distributed into these two principal topics, the Law and the promises. For in some places it presents the Law, and in others the promise concerning Christ, namely, either when [in the Old Testament] it promises that Christ will come, and offers, for His sake, the remission of sins, justification, and life eternal, or when, in the Gospel [in the New Testament], Christ Himself, since He has appeared, promises the remission of sins, justification, and life eternal.".[2] The Formula of Concord likewise affirmed this distinction in Article V, where it states: "We believe, teach, and confess that the distinction between the Law and the Gospel is to be maintained in the Church with great diligence..."[3]

Martin Luther wrote: "Hence, whoever knows well this art of distinguishing between Law and Gospel, him place at the head and call him a doctor of Holy Scripture."[4] Throughout the Lutheran Age of Orthodoxy (1580–1713) this hermeneutical discipline was considered foundational and important by Lutheran theologians.

This distinction was the first article in Patrick`s Places (1528) by Patrick Hamilton.[5]

Carl Ferdinand Wilhelm Walther (1811–1887), who was the first (and third) president of the Lutheran Church - Missouri Synod, renewed interest in and attention to this theological skill in his evening lectures at Concordia Seminary, St. Louis 1884-85.[6]

The Formula of Concord distinguished three uses, or purposes, in the Law in Article VI. It states: "[T]he Law was given to men for three reasons. . ."

The three uses of the Law are:

The distinction between law and gospel is a standard formulation in Reformed theology, though in recent years some have characterized it as distinctively Lutheran.[12] Zacharias Ursinus sharply contrasted the law and gospel as "the chief and general divisions of the holy scriptures" in his commentary on the Heidelberg Catechism.[13] Louis Berkhof called the law and the gospel "the two parts of the Word of God as a means of grace." Law and Gospel are found in both testaments.[14]

In his Institutes of the Christian Religion, the Reformer John Calvin distinguished three uses in the Law. Calvin wrote the following: "[T]o make the whole matter clearer, let us survey briefly the function and use of what is called the 'moral law.' Now, so far as I understand it, it consists of three parts."

This scheme is the same as the Formula of Concord, with the exception that the first and second uses are transposed.

In later Reformed scholasticism the order is the same as for Lutherans. The three uses are called: 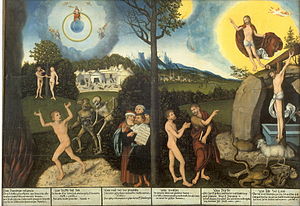 Law and Grace, by Lucas Cranach the Elder, a Lutheran. The left side of the tree illustrates law, while the right side illustrates grace

Scholastic Lutheran and Reformed theologians differed primarily on the way in which the third use functions for believers. The Reformed emphasized the third use (tertius usus legis) because the redeemed are expected to bear good works. Some Lutherans saw here the danger of works-righteousness, and argued that the third use should always return believers to the second use and again to Christ rather than being the ultimate norm.[15]

Additionally, some have suggested that the third use of the law is not found at all in Luther but comes from Melanchthon. Although some Lutherans have rejected that view,[16] it has caused others to dispute the validity of the "third use" of the Law entirely. Paul Althaus, for instance, writes in his treatise on Law and Gospel: "This [ethical] guidance by the Holy Spirit implies that God's concrete commanding cannot be read off from a written document, an inherited scheme of law. I must learn afresh every day what God wants of me. For God's commanding has a special character for each individual: it is always contemporary, always new. God commands me (and each person) in a particular way, in a different way than He commands others.... The living and spiritual character of the knowledge of what God requires of men in the present moment must not be destroyed by rules and regulations."[17] Such theologians believe the third use leads to or encourages a form of legalism and is possibly an implicit denial of sola fide. Conversely, Reformed Christians have sometimes seen this two-use scheme of some modern Lutherans as leading to a form of antinomianism.[citation needed]

Some believe that "for Luther the pedagogic use of the Law was primary, while for Calvin this third or didactic use was the principal one; yet [historically] both the Lutheran and the Reformed traditions maintain the threefold conceptualization."[16] 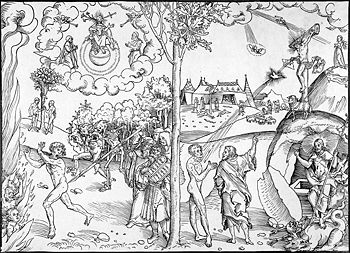 Law and Grace, a woodcut by Lucas Cranach the Elder, a Lutheran. The left side of the tree illustrates law, while the right side illustrates grace

Certain recurring grammatical patterns in the Old Testament[18] and in the New[19] involving the sequencing of imperative and indicative predicates are taken by theologians as central to the relationship between Law and Gospel. Daniel Defoe discusses three pairs of these predicates in his second and final sequel to Robinson Crusoe, Serious Reflections (1720): "forbear and live", "do and live", "believe and live". According to Defoe, the first was established with Adam in paradise, the second as the Law with the children of Israel, and the third as the Gospel of Jesus Christ.[20]