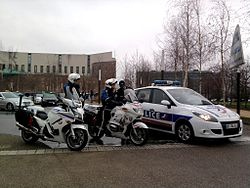 Policemen with motorcycles and a car in Strasbourg.

Law enforcement in France has a long history dating back to AD 570, when night watch systems were commonplace.[1][clarification needed] Policing is centralized at the national level.[1] Recently, legislation has allowed local governments to hire their own police officers which are called the "police municipale".[1]

There are two national police forces called "Police nationale" and "Gendarmerie nationale". The Prefecture of Police of Paris which provides policing services directly to Paris as a subdivision of France's Ministry of the Interior. Within these national forces only certain designated police officers have the power to conduct criminal investigations which are supervised by investigative magistrates.

Renault Mégane of the Douanes 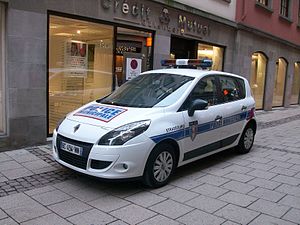 Vehicle of the municipal police of Strasbourg

The municipal policemen can notice all the breaches but cannot investigate. There are also local polices in the rural zones, as for the rural policemen the police rurale as such does not exist. Note the heterogeneousness of local polices both in means and in equipment. 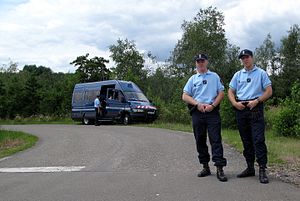 The leadership of both agencies is centralized and they both have conventional deviance control responsibilities respectively except in different geographical locations in France.[1] The Police Nationale is responsible for Paris and other urban areas whereas the gendarmerie is responsible for small towns and rural areas with fewer than 10,000 inhabitants.[2] The existence of two national police forces with similar goals and attributions, but somewhat different zones of activity, has at times created friction or competition between the two. Their merging has sometimes been suggested.

With the development of suburban dwellings, this had increasingly proved inadequate. Furthermore, the shifting of a town from a police to a gendarmerie zone was often controversial, because, typically, a gendarmerie unit serves a wide area.[3]

A redistribution of authority was thus decided and implemented between 2003 and 2005. Large conurbations are now handled entirely by the police. Rural and suburban areas, and some smaller cities with populations ranging from 5,000 to 16,000, are handled by the gendarmerie.[3]

In addition, the police and the gendarmerie have specific zones of authority:

In French, the term "police" not only refers to the forces, but also to the general concept of "maintenance of law and order" (policing).

There are two types of police in this general sense:

Also, the mayor (le maire) has administrative police power in a commune (municipality), which means that he or she can order the police to enforce municipal bylaws.

A judge has police power in his courtroom (i.e. he or she can order people who disrupt the trial to be expelled from the proceedings).

Until 1984, the National Police were involved in the prehospital rescue operations and casualty transport (called police-secours). The prehospital aid is now performed by the Sécurité civile (Civil Defence Agency) and by firefighter services; however, mountain rescue is shared between the gendarmerie's PGHM (pelotons de gendarmerie de haute montagne, High Mountain Platoons of the Gendarmerie) and the National Police's CRS (compagnies républicaines de sécurité; Republican security companies).

Many other countries have followed the French model and have established separate police agencies with the same role but different jurisdictions.

A local precinct of the "police nationale" (called commissariat) or the "gendarmerie nationale" (called brigade) may not be capable of conducting complex investigations. For this reason, both the police and the gendarmerie maintain regional services dedicated to criminal investigations (police judiciaire); these are known as "regional services of judiciary police" (Services régionaux de la Police judiciaire) in the police, "research sections" (Sections de recherche de la Gendarmerie nationale) in the gendarmerie. In addition, both the police and the gendarmerie maintain laboratories dedicated to forensics. The forensics service of the police is called Police technique et scientifique (Technical and Scientific Police). It is the equivalent of the American CSI Units.

Most criminal enquiries are conducted by the police. Justice may choose either service; sometimes, if the judiciary is disappointed by the results or the methods of one service, it may give the enquiry to the other service.

The National Police also features some central offices with national jurisdiction, charged with specific missions, such as the national anti-terrorist division.

One reason for giving commission to a military force to handle matters of civilian police is that the military is not allowed to go on strike, contrary to civilian public servants such as the police personnel, which enables the government to always have an instrument of law enforcement at hand.

Another advantage of the gendarmerie is that, being career soldiers, they have the authority to use armed force in a much less restricted way than the police (in popular culture so-called licence to kill).

The gendarmes have free housing facilities inside their respective gendarmerie brigades (precincts) or live in barracks (casernes), which is not the case for the police. 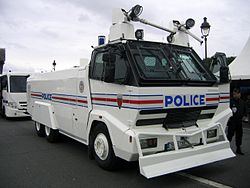 A water cannon of the French National Police

The police judiciaire comprise a variety of actions undertaken under the direction and supervision of the judiciary. They include:

These actions must follow the rules given in the Code of Penal Procedure (Code de procédure pénale), articles 12 to 29.

In order to better fulfill these missions, the Direction Centrale de la Police Judiciaire of the French National Police regroups all the units specialized in criminal enquiries. The gendarmerie counterpart are the sections de recherche (research sections). 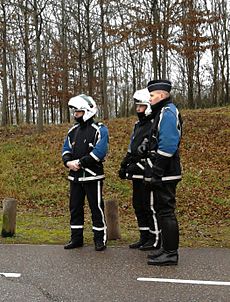 The powers of French police and gendarmerie forces are constrained by statute law. The rules of procedure depend on the stage of enquiry:

In particular, outside of crimes in flagrante delicto, law enforcement forces may not conduct searches or arrests without a specific commission from the investigative magistrate. Depending on legal status of cases, not all law enforcement officers are able to act; some powers are restricted to those with special legal qualifications (see next section).

Officers and agents of judiciary police 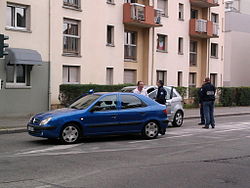 The procedures that police and gendarmerie officers follow when conducting criminal inquiries are set by the code of criminal procedure (Code de procédure pénale) and applicable jurisprudence. Criminal inquiries are conducted under the supervision of the judiciary (depending on the phase, under the supervision of the public prosecutor or of an investigative judge).

These ministerial nomination decisions may only be taken after the approval of a specific commission. The current rules also warrant the completion of an examination pertaining to legal matters.

Only OPJs may serve search (this includes any body search more invasive than an external palpation) and put somebody in custody ("garde à vue") for 24 hours; APJs may only assist them in these tasks. In case a suspect has been apprehended by an APJ, he or she must be brought before an OPJ, which will in turn have to inform the public prosecutor. According to the law, any citizen can apprehend the author of a crime or of an offence that can be punished by a prison sentence (citizen's arrest), and lead him or her to an OPJ. However, this is problematic in case of a "simple" citizen due to the estimation of what can be punished by a prison sentence or not, and due to possible abuse (abuses are a restriction of the individual freedom and can be sued for illegal confinement).

The quality of officer of judiciary police may be withdrawn by the judiciary if the officer has behaved in an inappropriate fashion. The general prosecutor grades OPJs, and these grades are taken into account for possible promotions.