Law enforcement in Italy is provided by multiple police forces, five of which are national, Italian agencies. 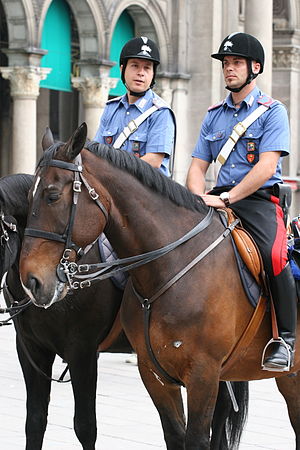 Italy divides police enforcement into Military and Civil guards, distinguishing each "corps" for duties and jurisdictions. All law enforcement officers are considered "Pubblico Ufficiale" (Public Functionary) but not all officers are "Agente di Pubblica Sicurezza" (Public Safety officer) as the latter gives the authority to arrest, investigate and patrol in the whole national territory and in all situations.

All police (except the military police, the Carabinieri) are under the Ministero dell'Interno, the highest police and public safety authority, which - through the Department of Public Safety - coordinates the enforcements. Locally, Polizia di Stato is under the Authority of the Prefetto, who collaborates with the Questore (the local chief of Polizia di Stato, with technical jurisdiction on all forces) to organise the enforcements.

Polizia Locale is under the authority of the mayor, but the officers' mandate is valid only during duty time, while Carabinieri, Polizia di Stato and Guardia di Finanza (which are public safety agents) are always "on duty", even during leave and vacations.

During 2005 in Italy, the number of active police officers from all agencies totaled 324,339, the highest number in the European Union both overall and per capita, twice the number of agents in the similarly sized United Kingdom.[1] However, in this numbers are included the members of the Arma dei Carabinieri, one of the four Italian Armed Forces, that does not have the unique role of police enforcement.

The Polizia di Stato (State Police) is the civil national police of Italy. Along with patrolling, investigative and law enforcement duties, it patrols the Autostrada (Italy's Express Highway network), and oversees the security of railways, bridges and waterways.

It is a civilian police force, while the Carabinieri and the Guardia di Finanza are military. While its internal organization and mindset is somewhat military, its personnel is composed of civilians. Its headquarters are in Rome, and there are Regional and Provincial divisions throughout Italian territory.

A program Polizia di Quartiere (Quarter Police) has been implemented which increases police presence and deters crime. Pairs of poliziotti (policemen) or carabinieri patrol areas of major cities on foot.

The Guardia di Finanza, (English: Financial Guard) is a military corps under the authority of the Minister of Economy and Finance, with a role as police force.

The Guardia di Finanza has a strength of around 68,000 soldiers working as agents, NCOs and officers. Its militaries are in service in the Europol and the European Anti-Fraud Office. Its Latin motto since 1933 is Nec recisa recedit (English: Not Even Broken Retreats). The Guardia di Finanza also maintains over 600 boats and ships and more than 100 aircraft to fulfill its mission of patrolling Italy's territorial waters.

During demonstrations and very big events, the Guardia di Finanza is often called on duty as riot police. 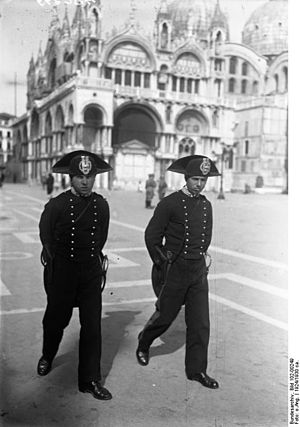 The Carabinieri is the common name for the Arma dei Carabinieri, a Gendarmerie-like military corps with police duties. They also serve as the military police for the Italian armed forces.

The Carabinieri have become a separate armed force (alongside the Army, Navy and Air Force), thus ending their long-standing tradition as the First Corps (Arma) of the Italian Army (Esercito). They are referred to as the Arma or La Benemerita (The Meritorious Corps).

Carabinieri units have been dispatched all over the world in peacekeeping missions, including Bosnia, Kosovo, Afghanistan and Iraq.

In November 2003, twelve Carabinieri were killed in a suicide bomb attack on their base in Nasiriyah, in southern Iraq. This was Italy's largest military loss in a single action since World War II.

Until 2001,[2] only men were allowed to become part of the Arma (or any military force, for that matter), but military reforms allow women to serve in the Italian military, including Carabinieri.

Having both military police duties and civil police duties, the Arma is usually called on duty as riot police during big events and demonstrations.

Its agents are sometimes called to help the other police forces during big events.

The Corpo Forestale dello Stato (National Forestry Department) is responsible for law enforcement in Italian national parks and forests. Their duties include enforcing poaching laws, safeguarding protected animal species and preventing forest fires. Founded in 1822, the Corpo Forestale dello Stato is a civilian police force specialised on the environmental protection. A recent law reform expanded its duties to food controls.[3] In Italy it has the responsibility to manage the activities related to the CITES (Convention on International Trade in Endangered Species).

The Direzione Investigativa Antimafia (or DIA) (Anti-Mafia Investigation Department) is a joint organization of Polizia di Stato, Carabinieri, Corpo Forestale dello Stato and Guardia di Finanza for the fight against organized crime. Founded in 1991, under the authority of the Minister of Interior e the coordination of the Direzione Nazionale Antimafia (National Anti-Mafia Directorat). Its operations include preemptive investigations, judicial investigations, and international relations, and it investigates characteristics, objectives, and methods of the Mafia as a well as their domestic and international contacts. The DIA was to prevent mafiosi from infiltrating the government.[4]

The Direzione Centrale per i Servizi Antidroga (Central Directorate for Anti-Drug Services) is a joint organization of Polizia di Stato, Carabinieri and Guardia di Finanza for the fight against drug trafficking. Founded in 1976 us Direzione Anti Droga (Anti-Drug Directorate), is under the authority of the Criminal police department of the Minister of Interior.

The Polizia Provinciale (Provincial Police) is a local police only used in some of the 109 provinces of Italy. Their main tasks are to enforce regional and national hunting and fishing laws, but have also expanded in wildlife management and environmental protection. Carries traffic police service and participates in the security services arranged by the authorities.

In addition, each comune has its own Polizia Municipale (Municipal Police) whose main duty is to enforce local regulations and traffic laws; it also deals with petty crimes but in larger cities they cooperate with the national police forces to prevent and repress major crimes. Depending on their location they are also called Polizia Municipale, Polizia Locale, Polizia Comunale, Polizia Urbana or Vigili Urbani.

In some regions Polizia Provinciale and Polizia Municipale are grouped together under the name Polizia Locale (Local Police), although they keep their own internal organisation. Small communes can merge their local police forces in a consortium.

Both provincial and municipal forces are reliant on the State Police for scientific support and other forms of assistance.

The Organizzazione di Vigilanza Repressione dell'Antifascismo (or OVRA) (English: Organization for Vigilance in Repression of Anti-Fascism) was a secret police organization in Italy during fascism.

The Guardia Nazionale Repubblicana or GNR (National Republic Guard) was a paramilitary force of the Italian Social Republic created by decree on December 8, 1943, replacing the Carabinieri and the MVSN.

Zaptié were locally raised gendarmerie units in the Italian colonies of Tripolitania, Cyrenaica, Colonia Primigenia and Somalia between 1889 and 1942.

Zaptié were used during the period of Trust Territory of Somaliland from 1950 to 1960. Members were sent to Italy to train and after 1960 the merged into the Somali Police Force. 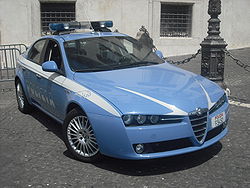 A police boat in Venice. 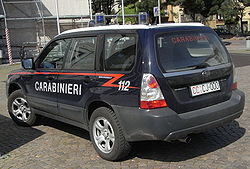 Until recently, all Italian police forces were equipped with Italian-made police cars, with FIAT and Alfa Romeos most common. The most famous of them, the Alfa Romeo Giulia, gave the nicknames of the cars still commonly used today. A patrol car belonging to Polizia is nicknamed Pantera (Panther), one used by the Carabinieri is nicknamed Gazzella (Gazelle) and every unmarked car is called a Civetta (Owl).

Every force has helicopters, trucks and campers (used as mobile offices, usually in undercover missions). In Venice, which is built across several islands linked by bridges and surrounded by water, public security and fire brigades work with boats.

In 2004, Lamborghini donated two Lamborghini Gallardo police cars to the Polizia di Stato on their 152nd anniversary. On the 31st November 2009 one of these 165,000-euro cars was badly damaged in a collision near the northern Italian town of Cremona where it was on display at a student jobs fair. The car apparently swerved to avoid another vehicle crossing its path and collided with two stationary vehicles; it was repaired in January 2010.