All of the states and territories of Australia that are self-governing are separate jurisdictions, and have their own system of courts and parliaments. The systems of laws in each state are influential on each other, but not binding. Laws passed by the Parliament of the Commonwealth apply to the whole of Australia.[1]

The organized system of law and government now in force in Australia is historically dependent for its legal validity on a series of British statutes, notably including the Commonwealth of Australia Constitution Act 1900. The authority of the United Kingdom Parliament to enact those statutes depended on the acquisition of the Australian continent as a territorial possession of the British Crown. Although the laws of the Australian colonies differed from the UK in many respects from the beginnings of settlement, the underlying patterns of thought reflect the common law tradition as received from Britain.

The legal institutions and traditions of Australian law are monocultural in character, reflecting its English origins.[2] Influenced by contemporary ideas of international law, Sophism, and private ownership, the British regarded the Aboriginal peoples as being too primitive to have lawful possession of the Australian continent. They chose to treat New Holland (as much of Australia was then known) as terra nullius, meaning an empty place. Since the Privy Council had held that uninhabited lands settled by English subjects would be governed by the laws of England,[3] there was no place for Aboriginal native title to land, nor for the recognition of Aboriginal custom or law. The reception of English law was clarified by the Australian Courts Act 1828, which provided that all laws and statutes in force in England at the date of the enactment of the legislation should be applied in the courts of New South Wales and Van Diemen's Land (Tasmania) so far as they were applicable. Since Queensland and Victoria were originally part of New South Wales, the same date applies in those States for the reception of English law. South Australia adopted a different date for reception,[4] as did Western Australia.[5]

The earliest civil and criminal courts established from the beginnings of the colony of New South Wales were rudimentary, adaptive and military in character. Although legality was not always observed, the courts limited the powers of the Governor, and the law of the colony was at times more egalitarian than in Britain.[6]

By 1824, a court system based in essence on the English model had been established through Acts of the British Parliament.[7] The New South Wales Act 1823 provided for the establishment of a Supreme Court with the power to deal with all criminal and civil matters "as fully and amply as Her Majesty's Court of King's Bench, Common Pleas and Exchequer at Westminster".[8] Inferior courts were also established, including courts of General or Quarter Sessions, and Courts of Requests.

Representative government emerged in the 1840s and 1850s, and a considerable measure of autonomy was given to local legislatures in the second half of the nineteenth century.[9] Colonial Parliaments introduced certain reforms such as secret ballots and female suffrage, which were not to occur in Britain until many years later. Nevertheless, Acts of the United Kingdom Parliament extending to the colonies could override contrary colonial legislation and would apply by "paramount force".[10] New doctrines of English common law continued to be treated as representing the common law of Australia. For example, the doctrine of the famous case of Donoghue v Stevenson from which the modern negligence law derived, was treated as being latent already within the common law at the time of reception.[11] 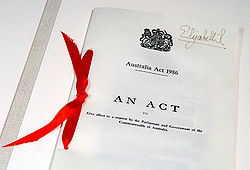 While the Constitution of the Commonwealth of Australia was itself an Act of the British Parliament, Britain's role in the government of Australia became increasingly nominal in the 20th century (the federal government is normally referred to in a legal context as 'the Commonwealth'). However, there was little momentum for Australia to obtain legislative independence. The Australian States did not participate in the conferences leading up to the Statute of Westminster 1931, which provided that no British Act should be deemed to extend to the dominions without the consent of the dominion. The Commonwealth did not invoke the provisions of the statute until 1942. Complete legislative independence was finally established by the Australia Act 1986, passed by the United Kingdom Parliament as well as those of the Commonwealth and States. It removed the possibility of legislation being enacted at the consent and request of a dominion, and applied to the States as well as the Commonwealth. It also provided for the complete abolition of appeals to the Privy Council from any Australian court. The Australia Act represented an important symbolic break with Britain, emphasised by Queen Elizabeth II's visit to Australia to sign the legislation personally.

Legislative independence has been paralleled by a growing divergence between Australian and English common law in the last quarter of the 20th century.[12] In addition, a large body of English law received in Australia has been progressively repealed in state parliaments, such as in New South Wales' Imperial Acts Application Act 1969.

Australian Republicanism emerged as a movement in the 1990s hoping to eventually change Australia's status as a constitutional monarchy to a republican form of government.

The Australian Law Reform Commission investigates suggestions for reform raised by attorneys-general and in some jurisdictions, by members of the public.

The Australian colonies became a federation in 1901 through the passing of the Commonwealth of Australia Constitution Act by the British Parliament. The federal constitution was the product of nearly ten years of discussion, "with roots in both the British legal tradition and Australian democracy".[13]

The Constitution provided for the legislative power of the Commonwealth to be vested in a federal Parliament consisting of the Queen, a Senate and a House of Representatives. The role of the Queen in the legislative process lies in her responsibility to grant Royal Assent, a power exercised on her behalf by the Governor-General. The Queen has no actual role in the Assent to legislation in contemporary Australia.

Chapter III of the Constitution allows for the creation of the High Court of Australia, and either the establishment of other federal courts, or the vesting of federal jurisdiction in State courts. Australian courts could permit an appeal to the Privy Council on constitutional matters. The right of appeal from the High Court to the Privy Council was only abolished in 1975,[19] and from State courts in 1986.[20]

There are few guarantees of human rights in the Constitution; certainly nothing equivalent to the United States Bill of Rights. A few rights have been declared by the High Court as a matter of interpretation, including a guarantee of freedom of political speech,[21] and a right to the recognition of interstate professional qualifications.[22]

If the government agrees that the changes are worthwhile, a Bill is drafted, usually by Parliamentary Counsel. The Bill is read and debated in both houses of parliament before it is either rejected, changed, or approved. An approved Bill must then receive the assent of either the Governor (State) or the Governor-General (Commonwealth). Parliament often delegates legislation to local councils, statutory authorities and government departments.

Most statutes are meant to be applied in the main not by legal practitioners and judges but by administrative decision makers.[23] Certain laws receive more judicial interpretation than others, either because more is at stake or because those who are affected are in a position to take the matter to court. Whilst the meanings presented to the court are often those that benefit the litigants themselves,[24] the courts are not bound to select one of the interpretations offered by the parties.[25]

Australian courts have departed from the traditional approach of interpreting statutes (the literal rule, the golden rule,[26] and the mischief rule[27]). The dominant approach is that rules are not to be applied rigidly because the overriding goal is to interpret the statute in accordance with the intentions of Parliament.[28] This so-called "purposive approach" has been reinforced by statute.[29] Legislation in all States and Territories allows recourse to extrinsic materials.[30]

Unlike the United States Supreme Court, the High Court of Australia, which was established in 1903, has a general appellate jurisdiction over the State Supreme Courts. This ensures there is a single uniform Australian common law.[31]