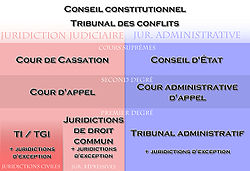 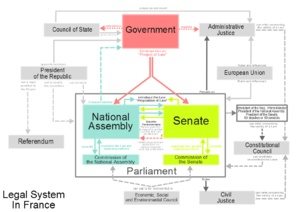 In academic terms, French law can be divided into two main categories: private law ("droit privé") and public law ("droit public"). This differs from the traditional Common Law conception in which the main distinction is between Criminal law and Civil Law.

Private Law governs relationships between individuals.[1] It includes, in particular:[2]

Public law defines the structure and the workings of the government as well as relationships between the State and individuals.[1] It includes, in particular:

Together, these two distinctions form the backbone of legal studies in France, such that it has become a classical distinction[2]

The announcement in November 2005 by the European Commission that, on the basis of powers recognised in a recent European Court of Justice ("ECJ") ruling, it intends to create a dozen or so European Union ("EU") criminal offences suggests that one should also now consider EU law ("droit communautaire", sometimes referred to, less accurately, as "droit européen") as a new and distinct area of law in France (akin to the "federal laws" that apply across States of the US, on top of their own State law), and not simply a group of rules which influence the content of France's civil, criminal, administrative and constitutional law.

As mentioned, the term civil law in France refers to private law, and should be distinguished from the group of legal systems descended from Roman Law known as civil law, as opposed to common law. The body of statutes and laws governing civil law and procedure are set out in the Civil Code of France,[4] although other private law statutes are located in different codes (i.e. Commercial Law in the Code of Commerce, or Copyright Law in the Intellectual Property Code).

French criminal law is governed first and foremost by the Code pénal, or Criminal Code. For example, the Criminal Code formally prohibits violent offences, e.g., homicide, assault, etc., and many pecuniary offences such as theft or money laundering, and provides general punishment guidelines. However, a number of criminal topics, e.g., slander and libel, have not been codified but are instead addressed by legislation.[5]

Constitutional law is a branch of public law dealing with:

It fixes the hierarchy of laws and rules within the French legal system and the relationship between these different norms. Constitutional law became independent from political science and administrative law with the Constitution of 1958 which included the institution of a constitutional court, the "Conseil Constitutionnel".

Traditionally, Union law has been viewed as a body of rules which are transposed automatically (in the case of a regulation) or by national legislation (in the case of a directive) into French domestic law, be it civil, criminal, administrative or constitutional.

However, in November 2005 the Commission announced that, on the basis of a (somewhat controversial) ECJ court decision (holding that the EU had the right to require Member States to introduce criminal laws because, in the case at hand, it was necessary to uphold EU legislation on combatting pollution), it intended to create a dozen or so EU criminal offences, creating echos of the federal laws which exist in the United States of America. Indeed, the Commission - led by its Commissioner for Justice and Home Affairs Franco Frattini - insists that the principle created in the ECJ court decision applies across all policies, not just policies concerning pollution.

Subsequently, in May 2006, the Commission formally submitted to the EU Parliament and EU Council (which have co-decision powers) the first draft directive aiming to put this new prerogative into effect. The draft concerns counterfeiting (for example, of car parts, drugs, or children's toys) and requires each Member State to set the following penalties for what it terms "organised counterfeiters": a period of imprisonment of up to four years and a fine of up to €300,000. The Parliament began its consideration of the draft directive in March 2007.