The legal system in Hong Kong is therefore similar to the common law systems used in England and Wales and other Commonwealth countries. In contrast, the legal system of the People's Republic of China is akin to those in Continental Europe with influence from socialist law. The Hong Kong judiciary has had a long reputation for its fairness and was recently rated as the best judicial system in Asia by a North Carolina think tank.[2]

The Hong Kong Basic Law contains the essentials of the constitutional framework in the Hong Kong Special Administrative Region. Article 8 stipulates that all laws in force before 1997, including

"the common law, rules of equity, ordinances, subordinate legislation and customary law shall be maintained, except for any that contravene this Law, and subject to any amendment by the legislature of the Hong Kong Special Administrative Region."

Article 18 states, further, that national laws, from the People's Republic of China do not apply, except for a specific list in Annex III to the Basic Law, to which the Standing Committee of the National People's Congress can add or delete what it chooses. However, this may only be in the fields of "defence and foreign affairs as well as other matters outside the limits of the autonomy of the Region as specified by this Law." It also has a derogation, in a war situation, for a state of emergency to be declared.

Hence, the laws in force are in hierarchical order are The Hong Kong Basic Law; legislation in force before 1 July 1997 that was adopted as laws of the HKSAR by the Standing Committee of the National People's Congress; laws enacted by the Legislative Council of Hong Kong after 1997; and PRC laws listed in Annex III to the Basic Law and applied by way of promulgation or legislation; Common law and Equity; Subordinate legislation; Customary law. Currently, 12 PRC laws apply in the HKSAR.

The Legal Advisory and Conveyancing Office (LACO, 法律諮詢及田土轉易處) is part of the Lands Department. It provides legal advice primarily to the Lands Administration Office of the Lands Department and other government departments on land related matters and ordinances. LACO is responsible for drafting and settling government land disposal and lease modification documents. LACO is also responsible for the preparation of documentation relating to the acquisition of land from private owners pursuant to statutory powers and the payment of compensation to those owners. LACO administers the Lands Department Consent Scheme to approve applications by developers to sell flats in uncompleted developments. It also approves Deeds of Mutual Covenant requiring approval under land leases. LACO also provides conveyancing services to the Financial Secretary Incorporated for the extension of non-renewable leases, the Government Property Agency for the sale and purchase of government properties and the Secretary for Home Affairs Incorporated for the purchase of accommodation for welfare purposes in private developments. It handles applications for the apportionment of premium and government rents under the Government Rent and Premium (Apportionment) Ordinance. In addition, it is responsible for the recovery of arrears of government rents other than rents under the Government Rent (Assessment and Collection) Ordinance.

Under the Basic Law, the HKSAR has a high degree of autonomy in external affairs. With the authority of the Central People's Government where necessary, it has concluded more than a hundred bilateral agreements with other jurisdictions. In addition, over 200 multilateral international conventions are applicable to the HKSAR. Using the name “Hong Kong, China”, the HKSAR also participates on its own as a full member in international organisations and conferences not limited to states, e.g. the World Trade Organization, the World Customs Organization, the Asia-Pacific Economic Cooperation, etc. As part of the delegation of the People’s Republic of China, representatives of the HKSAR Government participate in activities of the Hague Conference, as well as of other international organisations and conferences limited to states, such as the International Monetary Fund, the World Intellectual Property Organization and the International Civil Aviation Organization. 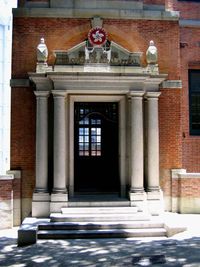 The Court of Final Appeal

The Department of Justice (DOJ) It consists of five professional divisions responsible for legal work. It is headed by the Secretary for Justice, who is a member of the Executive Council and is the Government’s chief legal adviser. He has ultimate responsibility for the prosecution of all offences in the HKSAR.

The Law Reform Commission considers and reports on such topics as may be referred to it by the Secretary for Justice or the Chief Justice of the Court of Final Appeal of the HKSAR. Its membership includes academics, practising lawyers and prominent community members. The Commission has published reports covering subjects as diverse as commercial arbitration, data protection, divorce, sale of goods and supply of services, insolvency, fraud and statutory interpretation. The recommendations in many of its reports have been implemented, either in whole or in part. It is currently considering references on privacy, guardianship and custody, domicile, privity of contract, advance directives, hearsay in criminal proceedings and conditional fees.

Even prior to the transfer of sovereignty of Hong Kong, Hong Kong's legal profession was open to foreign law firms allowing foreign firms to establish a much earlier foothold in Hong Kong than in the People's Republic of China. Only on July 1, 1992, in contrast, did the PRC government open her legal services market to foreign law firms when the Ministry of Justice issued the Provisional Regulation of Establishment of Offices by Foreign Law Firms regulation.[4] Thus every Magic Circle law firm as well as major U.S. law firms have large presences in Hong Kong.

While foreign law firms face much less strict regulations than they would in the People's Republic of China due to the "one country, two systems" rule, they have seen increasing competition from local firms as PRC firms have become more sophisticated. According to Asia Law & Business, the top foreign Hong Kong law firm of 2007 Johnson Stokes & Master (now Mayer Brown JSM)[5] while top PRC law firm was King & Wood PRC Lawyers.[6] Chinese firms have seen rapid growth in Hong Kong in the past several years after reunification.

The legal bodies governing the conduct of solicitors and barristers are the Law Society of Hong Kong and the Hong Kong Bar Association, respectively. There are currently three law schools offering the Postgraduate Certificate in Laws, required for starting work as a trainee solicitor or pupil barrister.[7]

The Director of Legal Aid is responsible for the administration of Home Affairs Bureau after July 1, 2007. Eligible persons are provided with legal representation depending on their financial circumstances.

Legal aid is available for civil proceedings in the District Court, the Court of First Instance and the Court of Appeal (both part of the High Court), and the Court of Final Appeal. It also covers proceedings in some tribunals and certain Coroner’s Court cases. An applicant must satisfy both a ‘means test’ and a ‘merits test’. For the means test, a person whose total financial resources do not exceed $155,800 may be granted legal aid. The Director of Legal Aid may waive the upper financial limit in meritorious cases when a breach of the Hong Kong Bill of Rights or inconsistency with the International Covenant on Civil and Political Rights as applied to Hong Kong is an issue. For the merits test, the Director must be satisfied that an applicant has reasonable grounds for bringing or defending the civil proceedings to which the application relates. A person aggrieved by a decision of the Director may appeal to the Registrar of the High Court.

Legal aid is available for committal proceedings in the Magistrates’ Courts; cases tried in the District Court and the Court of First Instance of the High Court; and appeals from the Magistrates’ Courts, and to the Court of Appeal of the High Court or the Court of Final Appeal. An applicant must satisfy the means test criteria which are the same as for civil cases. Notwithstanding that an applicant’s financial resources exceed the statutory limit, the Director of Legal Aid may grant legal aid to the applicant if the Director is satisfied that it is desirable in the interests of justice to do so. However, in appeal cases, the Director of Legal Aid must be satisfied that there are meritorious grounds for appeal with a reasonable prospect of success. Notwithstanding the refusal of a legal aid application by the Director of Legal Aid, a judge may himself grant aid if the applicant has satisfied the means test. Applicants in cases involving a charge of murder, treason or piracy with violence may apply to a judge for granting of legal aid, and exemption from the means test and from payment of contribution.

This scheme provides legal representation to the sandwich class whose financial resources are above the upper eligibility limit for legal aid (i.e. $155,800) but do not exceed $432,900. It covers cases involving personal injury or death, as well as medical, dental or legal professional negligence, where the claim for damages is likely to exceed $60,000. The scheme also covers claims under the Employees’ Compensation Ordinance irrespective of the amount of the claim.

Three programmes of legal assistance, jointly administered by the Law Society and Bar Association of Hong Kong, are subvented by the Government. The Duty Lawyer Scheme rosters barristers and solicitors in private practice to appear in the Magistrates and Juvenile Courts on a remunerated basis. The scheme provides representation to all juveniles (defendants under 16) and to most adult defendants charged in the Magistrates’ Courts who cannot afford private representation. The defendants are required to pay a handling charge of $300 upon granting of Duty Lawyer representation. In 2002, 45 162 defendants were assisted. The Legal Advice Scheme, staffed by over 840 volunteer lawyers, operates 10 sessions per week at nine evening centres. In 2002, 6 084 cases were handled. The scheme is not means tested. A free Tel-Law Service offers trilingual (Cantonese, Putonghua and English) taped information on 73 topics. Eight telephone lines operate 24 hours. In 2002, 51 058 calls were received.