Before 1840 there was no formal legal system in New Zealand. Māori chiefs held the power to punish people for misdeeds but this power, though dependent on custom and the broad support of the rest of the iwi, was arbitrary rather than based on a code of laws. Tohunga (priests) could also use supernatural means to punish those who violated the code of tapu, a spiritual belief system which controlled much of pre-Christian Māori life. The arrival of Europeans from the late eighteenth century undermined the power of both chief and tohunga. Europeans did not believe in tapu and widely violated it, and this, along with the influence of Christian missionaries, led Māori to doubt the effectiveness of the tohunga. The transient nature of many Europeans also made it difficult for chiefs to impose justice on them. As a result, New Zealand became increasingly lawless.

In the 1830s attempts were made to impose British law on British subjects in New Zealand, but these were unsuccessful. Missionaries and British officials such as James Busby were sometimes called upon to pass judgement on wrongdoers, but the effect of these was entirely dependent on the will of the chiefs. The inability of anyone to adequately control the growing European population was a major factor leading to the Treaty of Waitangi between the British Crown and Māori.

The Treaty of Waitangi, signed in 1840, is widely believed to have established British law in New Zealand. However, there are numerous problems with this theory. Firstly, the Māori and English language versions of the Treaty are substantially different. The English version transfers sovereignty to Queen Victoria (in clause one) and grants Māori the rights of British subjects (in clause three). Although no specific mention is made in the Treaty of any legal system, these two clauses seem to imply that British law would be established in New Zealand. The Māori version, however, states that Victoria receives kawanatanga (governorship) while the chiefs retain tino rangatiratanga (absolute chieftainship) in clause two as opposed to the property rights promised in the English version. Although the third clause of the Māori version says that the Queen would treat Māori the same as people in England, many historians argue that Māori believed that the new governor would exercise his powers over the Europeans only, and that the chiefs would continue to rule over Māori. In the eyes of some modern Māori, the New Zealand legal system is invalid as it violates the Treaty's promise of tino rangatiratanga (chieftainship).

Another problem with the idea that the Treaty established the rule of British law is that in 1840 Māori still controlled New Zealand. Although the British had sent a governor, they had not backed him up with troops and for the first few years of supposed British sovereignty, Europeans were significantly outnumbered and outgunned by Māori. Māori generally obeyed British law in European settlements and when they or their chiefs chose to, but there was nothing to make them obey the law in areas they controlled, which until about the 1860s was most of the country. British law, and later New Zealand law as passed by the New Zealand parliament was slowly established over the country, but it remained ineffective in Māori-controlled areas until the late nineteenth century at least. In practical terms, British-based law was established in New Zealand not through the Treaty of Waitangi but through conquest and settlement.

The Treaty was never ratified and has little standing in New Zealand law. In 1877 a judge ruled that it was a 'legal nullity'. In 1975 the Treaty of Waitangi Act was passed establishing the Waitangi Tribunal and enabling it to investigate and report on contemporary breaches of the Treaty, and recommend compensation. This had little impact until 1985, when the Act was amended to allow investigations into historic breaches. The Tribunal's rulings are not binding although in certain circumstances it can prevent or place conditions on the sale of state owned land. Since the 1980s references to the Treaty have appeared in various pieces of legislation, and legal rulings have established that it can be relevant even to legislation which does not mention it. However the government is not generally bound by the Treaty, nor are the people of New Zealand. 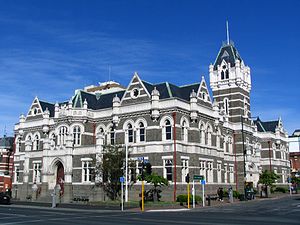 The Dunedin Law Courts, built in 1902

In 1865 a Native Land Court was established to "define the land rights of Māori people under Māori custom and to translate those rights or customary titles into land titles recognisable under European law".[1] It has since been heavily criticised for acting as a device for removing Māori from their land. Some of the problems were with the court itself – holding proceedings in English and in cities far from Māori settlements, judges with inadequate knowledge of Māori custom – while others were more to do with the laws it enforced. For example, for many decades land law did not recognise that an entire hapu owned its land, and land ownership was put in the hands of a few people. In 1954 it was renamed the Māori Land Court, and has been substantially reformed since the nineteenth century. Until the mid-twentieth century it also dealt with Māori adoptions.

The New Zealand judiciary have generally been seen as independent and non-corrupt, although not always non-biased. Until recent years they have played a very minor role in developing the law, and as late as 1966 it was said that they "usually follow English decisions scrupulously".[2] In the 1980s the judiciary played a major role in redefining the constitutional position of the Treaty of Waitangi.