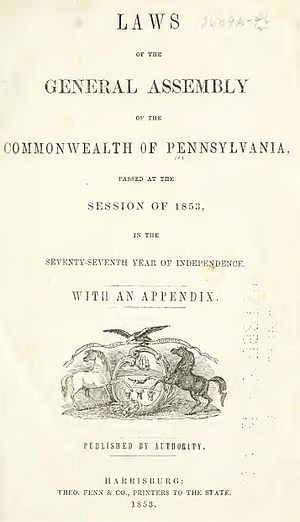 Title page of the 1853 Laws of Pennsylvania

There are also several unofficial sources for statutes. The old, unofficial codification is Purdon's Pennsylvania Statutes Annotated, which is also being updated in line with the new codification as Purdon's Pennsylvania Consolidated Statutes Annotated.[2][3] In addition, there are several historic sources of session laws. The Pennsylvania Statutes at Large contain charters, laws in force and obsolete laws from 1682 through 1809; publication began in 1896 and are being digitized by the LRB.[3][5] Smith's Laws contain public laws in force from 1700 through 1829, and were published prior to the Statutes at Large, beginning in 1810.[3]