Law of the United Kingdom

The United Kingdom does not have a single legal system since it was created by the political union of previously independent countries. Article 19 of the Treaty of Union, put into effect by the Acts of Union in 1707, created the Kingdom of Great Britain but guaranteed the continued existence of Scotland's separate legal system.[2] The Acts of Union of 1800, which combined Great Britain and Ireland into the United Kingdom of Great Britain and Ireland, contained no equivalent provisions but preserved the principle of separate courts to be held in Ireland, of which the part called Northern Ireland remains part of the United Kingdom.

The Supreme Court of the United Kingdom is the highest court in the land for all criminal and civil cases in England and Wales and Northern Ireland, and for all civil cases in Scots law.[3] The Supreme Court came into being in October 2009, replacing the Appellate Committee of the House of Lords.[4][5] In England and Wales, the court system is headed by the Senior Courts of England and Wales, consisting of the Court of Appeal, the High Court of Justice (for civil cases) and the Crown Court (for criminal cases). The Courts of Northern Ireland follow the same pattern. In Scotland the chief courts are the Court of Session, for civil cases, and the High Court of Justiciary, for criminal cases. Sheriff courts have no equivalent outside Scotland, as they deal with both criminal and civil caseloads.

The Judicial Committee of the Privy Council is the highest court of appeal for several independent Commonwealth countries, the British overseas territories, and the British Crown dependencies. There are also immigration courts with UK-wide jurisdiction — the Asylum and Immigration Tribunal and Special Immigration Appeals Commission. The Employment tribunals and the Employment Appeal Tribunal have jurisdiction throughout Great Britain, but not Northern Ireland.

There are three distinct legal jurisdictions in the United Kingdom: England and Wales, Northern Ireland and Scotland.[6] Each has its own legal system, distinct history and origins. 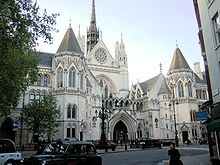 The Royal Courts of Justice in London, home of the Senior Courts of England and Wales

"English law" is a term of art. It refers to the legal system administered by the courts in England and Wales, which rule on both civil and criminal matters. English law is renowned as being the mother of the common law and is based on those principles. English law can be described as having its own legal doctrine, distinct from civil law legal systems since 1189. There has been no major codification of the law, and subject to statute, the law is developed by judges in court, applying statute, precedent and common sense to the facts before them, to give explanatory judgements of the relevant legal principles, which are reported and binding in future similar cases (stare decisis). In the early centuries, the justices and judges were responsible for adapting the Writ system to meet everyday needs, applying a mixture of precedent and common sense to build up a body of internally consistent law, e.g., the Law Merchant began in the Pie-Powder Courts, see Court of Piepowder (a corruption of the Law French "pieds-poudrés" or "dusty feet", meaning ad hoc marketplace courts). As Parliament developed in strength, subject to the doctrine of separation of powers, legislation gradually overtook judicial law-making, so that today judges are only able to innovate in certain very narrowly defined areas. The year 1189 was defined in 1276 as being the boundary of time immemorial.

The courts of England and Wales are headed by the Senior Courts of England and Wales, consisting of the Court of Appeal, the High Court of Justice (for civil cases) and the Crown Court (for criminal cases). The Supreme Court is the highest court in the land for both criminal and civil appeal cases in England, Wales, and Northern Ireland and any decision it makes is binding on every other court in the same jurisdiction, and often has persuasive effect in its other jurisdictions. On appeal, a court may overrule the decisions of its inferior courts, such as county courts (civil) and magistrates' courts (criminal). The High Court may also quash on judicial review both administrative decisions of the Government and delegated legislation. The ultimate body of appeal for all criminal and civil cases in England and Wales (and Northern Ireland, and for all civil cases in Scots law) is the Supreme Court of the United Kingdom, which took over this function from the Appellate Committee of the House of Lords (usually just referred to as "The House of Lords") in October 2009.[3]

After the Acts of Union, in 1707 English law became one of two legal systems in different parts of the same, united, kingdom and has been influenced by Scots law, most notably in the development and integration of the law merchant by Lord Mansfield and in time the development of the law of negligence. Scottish influence may have influenced the abolition of the forms of action in the nineteenth century and extensive procedural reforms in the twentieth.

Parliament House in Edinburgh is the seat of the Supreme Courts of Scotland.

Scots law is a unique legal system with an ancient basis in Roman law. Grounded in uncodified civil law dating back to the Corpus Juris Civilis, it also features elements of common law with medieval sources. Thus Scotland has a pluralistic, or 'mixed', legal system, comparable to that of South Africa, and, to a lesser degree, the partly codified pluralistic systems of Louisiana and Quebec. Since the Acts of Union, in 1707, it has shared a legislature with the rest of the United Kingdom. Scotland and England & Wales each retained fundamentally different legal systems, but the Union brought English influence on Scots law and vice versa. In recent years Scots law has also been affected by both European law under the Treaty of Rome and the establishment of the Scottish Parliament which may pass legislation within its areas of legislative competence as detailed by the Scotland Act 1998.

The chief courts are the Court of Session, for civil cases,[7] and the High Court of Justiciary, for criminal cases.[8] The Supreme Court of the United Kingdom serves as the highest court of appeal for civil cases under Scots law, with leave to appeal from the Court of Session not required as a general rule.[9] Sheriff courts deal with most civil and criminal cases including conducting criminal trials with a jury, known as sheriff solemn court, or with a sheriff and no jury, known as sheriff summary Court. The sheriff courts provide a local court service with 49 sheriff courts organised across six sheriffdoms.[10] The Scots legal system is unique in having three possible verdicts for a criminal trial: "guilty", "not guilty" and "not proven". Both "not guilty" and "not proven" result in an acquittal with no possibility of retrial.[11]

The Cabinet Secretary for Justice is the member of the Scottish Government responsible for the police, the courts and criminal justice, and the Scottish Prison Service, which manages the prisons in Scotland.[12] Though the level of recorded crime in 2007/08 has fallen to the lowest for 25 years,[13] the prison population, at over 8,000,[14] is hitting record levels and is well above design capacity.[15]

The Houses of Parliament, as seen over Westminster Bridge
Main article: Parliament of the United Kingdom

Parliament evolved from the early medieval councils that advised the sovereigns of England and Scotland. In theory, power is vested not in Parliament, but in the "Queen-in-Parliament" (or "King-in-Parliament"). The Queen-in-Parliament is, according to the doctrine of parliamentary sovereignty, completely sovereign with the power to make and unmake any law other than to bind itself.

In modern times, real power is vested in the House of Commons; the Sovereign acts only as a figurehead and the powers of the House of Lords are greatly limited.

The Northern Ireland Assembly (Irish: Tionól Thuaisceart Éireann,[16] Ulster Scots: Norlin Airlann Semmlie)[17] is the devolved legislature of Northern Ireland. It has power to legislate in a wide range of areas that are not explicitly reserved to the Parliament of the United Kingdom, and to appoint the Northern Ireland Executive. It sits at Parliament Buildings at Stormont in Belfast.

The latest incarnation of the Assembly was established under the Good Friday Agreement of 1998, an accord aimed at bringing an end to Northern Ireland's violent 30-year Troubles. It is based on the principle of power-sharing under the D'Hondt method to ensure that Northern Ireland's largest political communities, the unionist and nationalist communities both participate in governing the region. The Assembly is a unicameral, democratically elected body comprising 108 members who are known as Members of the Legislative Assembly, or MLAs. Members are elected under the single transferable vote form of proportional representation.

The public entrance of the distinctive Scottish Parliament building, opened in October 2004.

The Scottish Parliament (Scottish Gaelic: Pàrlamaid na h-Alba; Scots: Scots Pairlament) is located in the Holyrood area of the capital Edinburgh. The Parliament, which is informally referred to as "Holyrood"[18] (cf. "Westminster"), is a democratically elected body of 129 members who are known as Members of the Scottish Parliament or MSPs. Members are elected for four-year terms under the Additional Member System of proportional representation. As a result, 73 MSPs represent individual geographical constituencies elected by the plurality voting system ("first past the post"), with a further 56 returned from eight additional member regions, each electing seven MSPs.[19] The original Parliament of Scotland (or "Estates of Scotland") was the national legislature of the independent Kingdom of Scotland and existed from the early thirteenth century until the Kingdom of Scotland merged with the Kingdom of England under the Acts of Union 1707 to form the Kingdom of Great Britain.[20] As a consequence, the Parliament of Scotland merged with Parliament of England, to form the Parliament of Great Britain, which sat at Westminster in London.[20]

Since 2012, the National Assembly for Wales Welsh: Cynylliad Genedlaethol Cymru)has been invested with limited legislative powers. It is situated in Cardiff. The National Assembly, first elected in 1999, is a democratically elected body of 60 members who are known as Assembly Members or AMs. Members are elected for four-year terms under the Additional Member System of proportional representation. As a result, 40 AMs represent individual geographical constituencies elected by the plurality voting system ("first past the post"), with a further 20 returned from five additional member regions, each region electing four AMs.