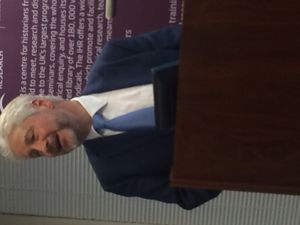 Lawrence Goldman (born 17 June 1957) is an historian and current director of the Institute of Historical Research. A former editor of the Oxford Dictionary of National Biography, he has an M.A. from the University of Oxford and an M.A. and Ph.D. from University of Cambridge. He is a Fellow of the Royal Historical Society.

Born in London, he read history at Jesus College, Cambridge (1976–79) and received a Harkness Fellowship which enabled him to study American history at Yale University. He returned to Cambridge to undertake research in Victorian social science and social policy and in 1982 he was elected a Junior Research Fellow at Trinity College. In 1985, he moved to Oxford as University Lecturer in the Department for Continuing Education. He continues to teach regular adult classes and is president of the Thames and Solent district of the Workers' Educational Association. In 1990, he was appointed to a Fellowship at St Peter's College, where he has also served as admissions tutor and senior dean.[1]

During the academic year 2000–01, he was the University Assessor, a senior administrator responsible for student welfare. He has served as Chairman of Examiners for the Final Honour School of Modern History and recently chaired the first-ever review of the University archives.

On 1 October 2004, Lawrence Goldman was appointed editor[2] of the Oxford Dictionary of National Biography, published by Oxford University Press, succeeding Brian Harrison. The appointment was for ten years.