Laws of the Game (association football)

From Infogalactic: the planetary knowledge core
Jump to: navigation, search
"LOTG" redirects here. For the Nashville concert series, see Live on the Green. For the film, see Legend of the Guardians.

The Laws of the Game[1] are the codified rules that help define association football. They are the only rules of association football subscribed to by the sport's governing body FIFA. The laws mention the number of players a team should have, the game length, the size of the field and ball, the type and nature of fouls that referees may penalise, the frequently misinterpreted offside law, and many other laws that define the sport. During a match, it is the task of the referee to interpret and enforce the Laws of the Game.

There were various attempts to codify the rules of football in England in the mid-19th century. The extant Laws date back to 1863 where a ruleset was formally adopted by the newly formed Football Association. The original Laws were heavily influenced by the Cambridge rules and their early development saw substantial influence from the Sheffield Rules. Over time the Laws have been amended, and since 1886 they have been maintained by the International Football Association Board.

Current laws of the game

The current Laws of the Game (LOTG) consist of seventeen individual laws, each law containing several rules and directions:[1]

Today, the above 17 laws are less than 50 pages of a 140 by 215 mm (roughly A5-size) pamphlet. In 1997, a major revision dropped whole paragraphs and clarified many sections to simplify and strengthen the principles. These laws are written in English Common Law style and are meant to be guidelines and goals of principle that are then clarified through practice, tradition, and enforcement by the referees.

The actual law book has long contained 50 pages more of material, organized in numerous sections, that contain many diagrams but did not fit with the main 17 laws. In 2007, many of these additional sections along with much of the material from the FIFA Questions and Answers (Q&A), were restructured and put into a new Additional Instructions and Guidelines for the Referee section. This section is organized under the same 17 law points, consists of concise paragraphs and phrases like the laws themselves, and adds much clarifying material that previously was only available from National organizations and word of mouth among referees.

Referees are expected to use their judgement and common sense in applying the laws; this is colloquially known as "Law 18".[2]

Games which could be described in the most general sense as 'football' had been popular in Britain since the Medieval period. Rules for these games, where they existed, were not universal nor codified. A significant step towards unification was the drafting of the Cambridge rules in 1848 – though these were not universally adopted outside Cambridge University. The first and still oldest Football Club was Sheffield FC (founded in 1857), who in 1858 codified the Sheffield rules of football. The Sheffield rules were popular and adopted by several Northern and Midlands clubs. 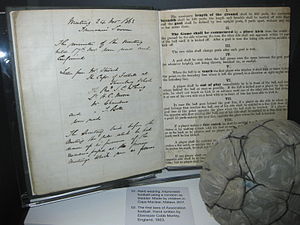 The original hand-written 'Laws of the Game' drafted for and on behalf of The Football Association by Ebenezer Cobb Morley in 1863 on display at the National Football Museum, Manchester.

The Laws were first drawn up by Ebenezer Cobb Morley and approved at a meeting of the newly founded Football Association (FA) on 8 December 1863. These rules were heavily based on the Cambridge rules which were codified in 1848.[3]

Adoption of the laws was not universal among English football clubs. The Sheffield Rules continued to be used by many. Additionally, in preference of a more physical game with greater emphasis on handling of the ball, several decided against being part of the FA in its early years and would later form the Rugby Football Union.

At its meeting on 8 December the FA agreed that, as reported in Bell's Life in London, John Lillywhite would publish the Laws.[5] The first game to be played under the new rules was a 0-0 draw between Barnes and Richmond.[5]

Various amendments have been made to the Laws of the Game since 1863, resulting in the game known today. Notable amendments to the rules include:[6][4][7]

Governance of the Laws

Despite being the governing body of world association football, FIFA does not have direct jurisdiction over the Laws. Instead the Laws are governed by the International Football Association Board (IFAB), a separate body, albeit one in which FIFA is a member and holds the power to veto proposed changes.

When FIFA was founded in Paris in 1904, it immediately declared that FIFA would adhere to the Laws as decided by IFAB. The growing popularity of the international game led to the admittance of FIFA representatives to the IFAB in 1913.[9]

IFAB meet at least once a year to debate and decide any changes to the text as it exists at that time. The meeting in winter generally leads to an update to the laws on 1 July of each year that take effect immediately. The laws govern all international matches and national matches of member organizations.[9] Up until 1958 it was still possible for the British associations to combine to impose changes (or block amendments) over the wishes of FIFA. This changed with the adoption of the current voting procedure.

Presently a minimum of six of the eight seat IFAB board needs to vote to accept a rule change. Four seats are held by FIFA to represent their 200+ member nations, with the other four held by each of the British associations, meaning that FIFA's approval is necessary but not sufficient for a change in the Laws to be accepted.[9]

Unlike in several other sports, in association football television replays are not permitted to be part of the match officials' decision-making process. The extent to which game rules and practices should be amended to allow this has been a matter of considerable debate.[10][11][12][13]

A trial in Dutch competitive football was planned, but was in February 2015 postponed by IFAB for at least twelve months. Fifa general secretary Jerome Valcke referred to the potential adoption of the technology as the "biggest decision ever in the way football is played."[14]