Lazarus Saturday in the Eastern Orthodox Church[note 1] is the day before Palm Sunday to which it is liturgically linked. It celebrates the raising of Lazarus of Bethany, the narrative of which is found in the Gospel of John (John 11:1-45).

Lazarus Saturday and Palm Sunday together hold a unique position in the church year, as days of joy and triumph interposed between the penitence of Great Lent and the mourning of Holy Week.[1]

During the preceding week the propers in the Lenten Triodion track the sickness and then the death of Lazarus, and Christ's journey from beyond Jordan to Bethany. This week is referred to as the "Week of Palms" or the "Flowery Week."[2]

The position of Lazarus Saturday is summed up in the first sticheron chanted at vespers on Friday:[note 2] 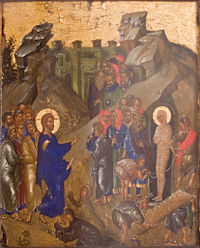 Having completed the forty days that bring profit to our soul, we beseech Thee in Thy love for man: Grant us also to behold the Holy Week of Thy Passion, that in it we may glorify Thy mighty acts and Thine ineffable dispensation for our sakes, singing with one mind: O Lord, glory to Thee.

During Friday vespers the reading of Genesis (which began on the first day of Great Lent) is concluded with the description of the death, burial and mourning of Jacob (Genesis 49:33-50:26) and on Friday night, at compline, a Canon on the Raising of Lazarus by Saint Andrew of Crete is sung; this is a rare full canon, having all nine canticles.

The scripture readings and hymns for this day focus on the raising of Lazarus as a foreshadowing of the Resurrection of Christ and a prefiguring of the General Resurrection. The Gospel narrative is interpreted in the hymns as illustrating the two natures of Christ: his humanity in asking, "Where have ye laid him?" (John 11:34), and his divinity by commanding Lazarus to come forth from the dead (John 11:43). A number of the hymns, written in the first or second person, relate Lazarus' death, entombment and burial bonds symbolically to the individual's sinful state. Many of the resurrectional hymns of the normal Sunday service are sung while prayers for the departed, prescribed on Sundays, are permitted. During the divine liturgy, the baptismal hymn, "As many as have been baptized into Christ have put on Christ" (Romans 6:3) replaces the Trisagion indicating that this had been a day on which baptisms were performed [2] and in some churches nowadays adult converts are still baptized on this day.

Lazarus Saturday is the day when, traditionally, hermits would leave their retreats in the wilderness to return to the monastery for the Holy Week services.[2] In many places in the Russian Church, the vestments and church hangings on this day and on Palm Sunday are green, denoting the renewal of life. In the Greek Church, it is customary on Lazarus Saturday to plait elaborate crosses out of palm leaves which will be used on Palm Sunday.

Although the forty days of Great Lent end on Lazarus Friday, this day is still observed as a fast day; however, the fast is mitigated to allow consumption of caviar, eggs being a symbol of the resurrection and prominent on Pascha, and fish eggs being a shadow thereof show the raising of Lazarus as a foreshadowing of Christ's Resurrection, as elucidated in the propers of the day.

In the Greek Orthodox Church, spice breads called Lazarakia are made and eaten on this day.

The antiquity of this commemoration is demonstrated by the homilies of St. John Chrysostom (349 - 407), St Augustine of Hippo Regia (354 - 430), and others. In the 7th and 8th centuries, special hymns and canons for the feast were written by St. Andrew of Crete, St. Cosmas of Maium and St. John Damascene, which are still sung to this day.[2]

The Raising of Lazarus is also commemorated on this same Saturday according to the Church Calendar of the Armenian Apostolic Church.

The feast (Vrbica, Lazareva Subota) is commemorated by Serbian Orthodox Christians. Due to a general lack of palm trees, pussy willow branches are blessed, and distributed to the faithful. Small bells are often tied to the branches.