The political leadership of East Germany was in the hands of several offices.

Prior the proclamation of an East German state, the Soviets established in 1948 the German Economic Commission (DWK) as a de facto government in their occupation zone. Its chairman was Heinrich Rau.

On 7 October 1949 an East German state, called the German Democratic Republic (GDR), was proclaimed and took the governmental functions over from the DWK. (Largely with the same function owners.)

For most of its existence (until autumn of 1989), the most important position in the GDR was that of the General Secretary of the Socialist Unity Party (SED). The Communist party and its leader held ultimate power and authority over state and government.

The formal head of state originally was the President of the German Democratic Republic. After the death of incumbent Wilhelm Pieck in 1960, the office was replaced by a collective head of state, the State Council. The position of chairman was commonly held by the party leader.

Government was headed by the Council of Ministers and its chairman, sometimes colloquially called Prime Minister.

Other important institutions included the People's Chamber, whose sessions were chaired by a President of the People's Chamber, and, since 1960, the National Defense Council, which held supreme command of the GDR's armed forces and had unlimited authority over the State in time of war. The Council was composed exclusively of members of the SED's Central Committee and Politburo, with the party leader serving as Chairman of the National Defense Council.

The political landscape was completely changed by the peaceful revolution late in 1989, which saw the Socialist Unity Party of Germany having to relinquish its monopoly on political power and the National Defense Council and the State Council being abolished. The remaining institutions were the People's Chamber, whose President by default became head of state for the remainder of the GDR's existence, and the Council of Ministers, both now based on the country's first and only democratic elections in March 1990. The GDR joined the Federal Republic of Germany on 3 October 1990

Leaders of the Socialist Unity Party of Germany (SED) 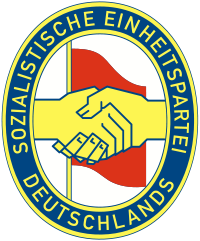 Logo of the Socialist Unity Party of Germany

On December 1, 1989, the People's Chamber deleted the section of the East German Constitution granting the SED a monopoly of power—thus ending Communist rule in East Germany. Before the month was out, the SED transformed from a Leninist cadre party into a democratic socialist party, renaming itself first to Socialist Unity Party — Party of Democratic Socialism and later in the same year, to Party of Democratic Socialism (PDS). Hence, the party's subsequent leaders were no more leaders of East Germany than the leaders of other parties.

Heads of the military 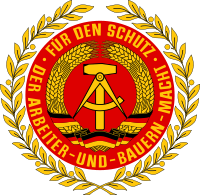 Coat of arms of the National People's Army