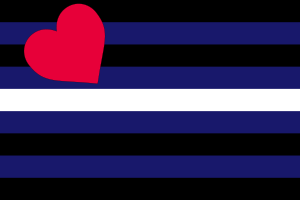 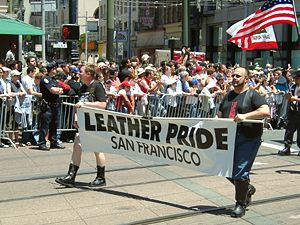 Start of the Leather contingent at the 2004 San Francisco gay pride parade.

Gay male leather culture has existed since the late 1940s,[1] when it likely grew out of post-WWII biker culture. Early gay leather bars were subcultural versions of the motorcycle club with pioneering gay motorcycle clubs including the Satyrs, established in Los Angeles in 1954; Oedipus, also established in Los Angeles in 1958, and the New York Motorbike Club. Early San Francisco clubs included the Warlocks and the California Motor Club,[2] while early clubs in Sydney included the South Pacific Motor Club (SPMC). Leather Clubs for gay men started in Amsterdam and Berlin in the 1950s, and in Sydney from 1970.

These gay clubs, like the clubs of straight motorcycle culture in general, reflected a disaffection with the mainstream culture of post-World War II America, a disaffection whose notoriety — and therefore appeal — expanded after the sensationalized news coverage of the Hollister "riot" of 1947. The 1953 film The Wild One starring Marlon Brando wearing jeans, a T-shirt, a leather jacket, and Muir cap, played on pop-cultural fascination with the Hollister "riot" and promoted an image of masculine independence that resonated with some gay men who were dissatisfied with a culture that stereotyped gay men as effeminate. To that end, gay motorcycle culture also reflected some men's disaffection with the coexistent gay cultures more organized around high culture, popular culture (especially musical theater), and/or camp style. Perhaps as a result, the leather community that emerged from the motorcycle clubs also became the practical and symbolic location for gay men's open exploration of kink and S&M.[2]

Throughout the history of the leather subculture, a variety of traditions have been observed, often diligently.[3] While most or all are based on military protocols and ritual, these traditions varied widely between regions, causing much debate today over which traditions are the original or true traditions, or whether the "romanticized versions of leather history" ever existed at all.[4]

The more specifically homoerotic aesthetics of men's leather culture drew on other sources as well, including military and police uniforms. This influence is particularly evident in the graphical illustrations of leathermen found in the work of Tom of Finland. The pornographic films of one of his models Peter Berlin from Berlin, such as his 1973 film Nights in Black Leather, also reflected and promoted the leather subcultural aesthetic. In the 1970s Berlin had a huge leather scene with several leather clubs in the gay area around Nollendorfplatz. In 1975 Europe's biggest gay fetish event started, Easter in Berlin Leather Festival.

Aspects of leather culture beyond the sartorial can also be seen in the 1970 murder mystery novel Cruising by Jay Green. The novel was the basis for the 1980 movie Cruising, which depicted aspects of the men's leather subculture for a wider audience.

Distinct aspects of heavy metal fashion can be credited to various bands, but the band that takes the most credit for revolutionizing the look was Judas Priest, primarily with its singer, Rob Halford who openly identifies as gay and wears black leather.[9] Halford wore a leather costume on stage as early as 1978 to coincide with the promotion for the Killing Machine (Hell Bent for Leather in the USA) album. In a 1998 interview, Halford described the leather subculture as the inspiration for this look. Shortly after appropriating the leather look, Halford started appearing onstage on a roaring motor bike. Soon, the rest of the band followed.

And lastly, perhaps no figure has more vividly represented the leather subculture in the popular imagination than the leatherman portrayed by Glenn Hughes of the Village People. 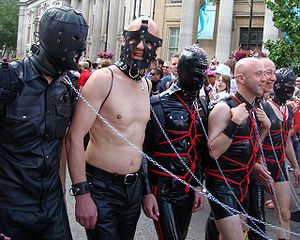 The Leatherman's Handbook by Larry Townsend, published in 1972, epitomizes the association of the leather subculture with BDSM.[10] Townsend described in detail a community of gay males who wore leather and casually engaged in sadomasochistic sex with one another. Recreational drugs and alcohol were frequently used. Pairings were often just for one night or a few days. Participants often took a dominant role in one encounter but a submissive role in another (a practice known as "switching"). Townsend describes very little in the way of social hierarchy or organization within this culture, though he does convey a definite sense of community.

Although gay men are the most visible symbol of the leather community, in 2010 there are numerous women who identify as leatherwomen - and women have the International Ms. Leather (IMsL) event as their corollary to International Mr. Leather (IML). An example is Joan Jett, who has a leather pride sticker prominently displayed on her guitar.

In the United States of America gay men's leather culture continues to be associated with men above the age of 40; however, in much of the rest of the world, including Europe and Australia, there is a merging of the established older leather community with young leathermen and leatherwomen and kink/fetish/gear communities. In Europe younger men have combined the aesthetic and exploration of sexual power with the gay skinhead movement and social-fraternal organizations like BLUF, from the late 1970s.

Berlin is today the Gay Fetish Capital of the World, with a huge number of different fetish clubs open all days of the week. In this city you can find all preferences you are looking for, like leather and bondage hotels, clubs, shops, bars and fetish festivals. Other cities with a huge leather scene include Amsterdam and London.[11] 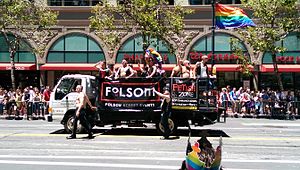 Many LGBT museums, archives and libraries collect material relating to leather communities, with many holdings substantial collections, including the Australian Lesbian and Gay Archives. The most notable of these collections is the dedicated Leather Archives and Museum, based in Chicago. In 2005 Viola Johnson started The Carter-Johnson Leather Library,.[12]