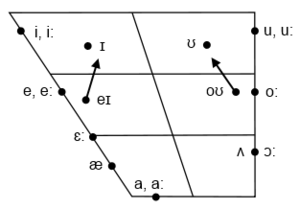 This table shows the correspondence between general Lebanese Arabic vowel phonemes and their counterpart realizations in Modern Standard Arabic (MSA) and other Levantine Arabic dialects.

File:Yara-said-akl.jpg
Lebanon's nationalist poet, Said Akl's book Yara and an excerpt from the book in his proposed Lebanese Arabic Latin alphabet, which Fairouz and the Rahbani Brothers had chosen for their song, "Yara"

Although there is a common Lebanese Arabic dialect mutually understood by Lebanese people, there are regionally distinct variations with, at times, unique pronunciation, grammar, and vocabulary.

Lebanese Arabic is rarely written, except in novels where a dialect is implied or in some types of poetry that do not use classical Arabic at all. Lebanese Arabic is also utilized in many Lebanese songs, theatrical pieces, local television and radio productions, and very prominently in zajal.

Formal publications in Lebanon, such as newspapers, are typically written in Modern Standard Arabic, French, or English.

While Arabic script is usually employed, informal usage such as online chat may mix and match Latin letter transliterations. The Lebanese poet Saïd Akl proposed the use of the Latin alphabet but did not gain wide acceptance. Whereas some works, such as Romeo and Juliet and Plato's Dialogues have been transliterated using such systems, they have not[citation needed] gained widespread acceptance. Yet, now, most Arabic web users, when short of an Arabic keyboard, transliterate the Lebanese Arabic words in the Latin alphabet in a pattern similar to the Said Akl alphabet, the only difference being the use of digits to render the Arabic letters with no obvious equivalent in the Latin alphabet.

There is still today no generally accepted agreement on how to use the Latin alphabet to transliterate Lebanese Arabic words.

In 2010, The Lebanese Language Institute has released a Lebanese Arabic keyboard layout and made it easier to write Lebanese Arabic in a Latin script, using unicode-compatible symbols to substitute for missing sounds.[1]

Lebanese Arabic verbs, even though they share root similarities with many Arabic dialects, display unique characteristics that set them apart from Arabic verbs.[citation needed]