From Infogalactic: the planetary knowledge core
Jump to: navigation, search
This article is about the city in Pennsylvania. For the 2010 film, see Lebanon, PA (film). For other uses of "Lebanon", see Lebanon (disambiguation). 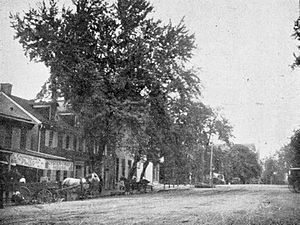 Lebanon bologna was first made here. Lebanon was formerly home to a major steel mill operated by Bethlehem Steel. 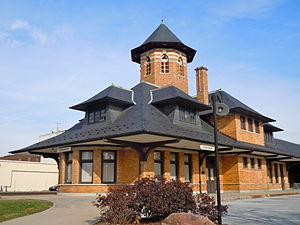 Local points of interest listed on the National Register of Historic Places[4] include:

According to the United States Census Bureau, the city has a total area of 4.2 square miles (11 km2), all of it land. 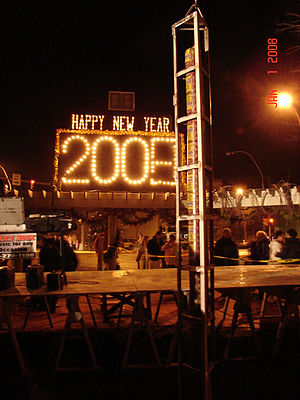 Lebanon is one of several Pennsylvania towns to drop or raise a unique item at midnight on New Year's Eve. Godshall's Quality Meats, owners of Weaver's Famous Lebanon Bologna, donates a huge (150-pound (68 kg)) Lebanon bologna for the annual festivity. It is encased in a metal frame and suspended from a fire department ladder truck, and donated to a local rescue mission after the celebration.[10]

An infamous 1878 murder in Fort Indiantown Gap resulted in a trial of six defendants who all had blue eyes. They were given the moniker the Blue-eyed Six by a newspaper reporter who attended the trial, held in the Lebanon county courthouse. Five of the six defendants were hanged at the county jail. The trial received worldwide publicity and provided inspiration to Arthur Conan Doyle in writing the Sherlock Holmes short story The Adventure of the Red-Headed League.[11]

At one point in history the Lebanon County courthouse and jail became the home of the Lebanon Farmers Market. However, the popular farmers market returned to the original 30,000 square foot Market House location on South 8th street in 2003. This popular indoor market includes vendors such as Candy Rama, Keener Poultry, The Pretzel Twist and TTT Star Sushi. In addition to the vendors, customers can sit down and dine upstairs in Niko's Restaurant.

In December 2008, the TV show Dirty Jobs, hosted by Mike Rowe, visited the Seltzer's Smokehouse Meats to film production of Lebanon bologna.[12] In 2008 the show featured the Wertz Candy Shop.[13][14]

In 2010, an independent film drama Lebanon, PA was made.[15] While the movie was set in Lebanon, all filming was done in other parts of Pennsylvania.

Lebanon, Pennsylvania, is named after the ancient Middle Eastern nation of Lebanon, which is commonly pronounced /ˈlɛbənɒn/, rhyming with the name "John." However, locals consistently pronounce the Pennsylvania city's name /ˈlɛbənən/ ("Leb-a-nin") and many shorten it to two syllables—"Leb-nin" or even "Lep-nin." The latter is particularly identified with Pennsylvania Dutch heritage.[16]