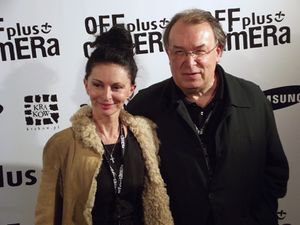 Born in Katowice, Poland, Majewski studied at the Academy of Fine Arts in Warsaw. In the 1970s, he then studied at the National Film School in Łódź, notably as a student of Wojciech Has, who taught Majewski directing. In the early 80s, after completing The Knight and as martial law was declared in Poland, Majewski emigrated to England and then to the United States, where he lived for most of the late Communist era.

Today, Majewski is a dual U.S. / Polish citizen, and travels often between those and other countries.

He is a member of the American and European film academies and the Polish International PEN.

Majewski speaks fluent, and excellent, English, but often works with English-speaking natives on his script. That was the initial role that Julian Schnabel had on Basquiat, before Majewski abandoned the project and Schnabel took it over.

In 2006, the Museum of Modern Art in New York City hosted a complete (until then) retrospective of Majewski's work. This was their first ever full retrospective of a Polish filmmaker, and one of their only ever mid-career retrospectives. For that program, Majewski created the film eventually called Glass Lips, though initially it was known as Blood of a Poet.

In 2006-2007, Wendy Lidell of International Film Circuit circulated a retrospective of his work across the United States and Canada.

Produced between England and Brazil, a fictionalized story of Ronnie Biggs, mastermind of The Great Train Robbery of 1963.

The original version of this article was an adaptation of Google’s machine-translation of this version (2007-02-15) of the German Wikipedia article de:Lech Majewski.