From Infogalactic: the planetary knowledge core
Jump to: navigation, search
For the restaurant in London, see The Ledbury.

Ledbury is a Herefordshire market town, lying east of Hereford, and west of the Malvern Hills.

It has a significant number of timber-framed structures, in particular along Church Lane and High Street. One of the most outstanding is the Market House,[2] built in 1617, located in the town centre. Other notable buildings include the parish church of St. Michael and All Angels,[3] the Painted Room[4](containing sixteenth-century frescoes), the Old Grammar School, the Barrett-Browning memorial clock tower[5] (designed by Brightwen Binyon and opened in 1896 to house the library until 2015), nearby Eastnor Castle and the St. Katherine's Hospital site.[6]

Founded c.1231, this is a rare surviving example of a hospital complex, with hall, chapel, a Master's House (fully restored and opened in March 2015 to house the Library),[7] almshouses and a timber-framed barn.

Ledbury is a borough whose origins date to around 690 AD. In the Domesday Book it was recorded as Liedeberge. It may take its name from the River Leadon on which it stands. Old English burg (fortified or defended site) has been added to the river name.

As a town it was created on a bishop's manor, probably, like Leominster, Bromyard and Ross-on-Wye, in the episcopate of Bishop Richard de Capella (1121-1127).[8] It returned members to Parliament in the reign of Edward I. The Feathers Hotel was a famous 16th century drovers' inn.[9] It was not until the reign of Queen Elizabeth I that his 'poor town' became prosperous thanks mainly to three families of clothier merchants, Skynner, Skyppe, and Elton. No less than four battles were fought during the English civil wars, during which it was a bastion of royalism. Thereafter the arrival of the Martin and Biddulph during the age of aristocracy and into the Victorian signalled a financial sea-change for the town from these banker landowners; Biddulph was later ennobled.[10]

Ledbury was home to poetess Elizabeth Barrett Browning, who spent her childhood at Hope End. It is also the birthplace of poet laureate John Masefield, after whom the local secondary school is named. William Wordsworth's sonnet St. Catherine of Ledbury, dated 1835, begins "When ... Ledbury bells broke forth in concert".[11] In 1901 St. Katharine's priest was Charles Madison Green, whose wife, Ella, was the eldest sister of author H. Rider Haggard. During the twentieth century the population began to stabilise, hardly growing at all to the Census of 1971. Becoming a prosperous town of small and independent traders, it relied heavily on the agriculture industries. With the addition of the by-pass in 1979, the population rapidly expanded until nearly 10,000 in Census 2011.[12]

The Herefordshire and Gloucestershire Canal, which opened from Gloucester as far as here in 1798, passed through the lower part of the town with wharves at Bye Street and at what is now the Ross Road near the Full Pitcher public house. After closing in 1885, part of the Ledbury-to-Gloucester section of the canal was used by the Great Western Railway for the Ledbury and Gloucester Railway. The original line of the canal northwards towards Hereford can still be seen, where it went underneath the Ledbury-to-Hereford railway. When the Gloucester railway closed in 1964 as a result of the Beeching cuts it became overgrown, but the route through Ledbury then was used as a footpath. In 1997 a 1.6 miles (2.6 km) section from the bypass / Ross Road roundabout to the railway station was upgraded to a 2 m (6.6 ft) wide path with a surface of compacted limestone chippings that could be utilised by cyclists and wheelchair-users. This included creating several access points, thinning out but retaining many of the trees that had grown since the 1960s and reopening the skew bridge across the A438 Hereford Road. Unfortunately the proposed bridge to take the Town Trail (as it is now known) across the B4214 Bromyard Road into the station yard was never built. The Trail ends at the Hereford/Bromyard road junction.

Ledbury has a town council,[14] a Town Clerk, Mayor and, a Town Crier.

Ledbury is one of three market towns (Leominster, Bromyard and Ledbury) in the Leominster parliamentary constituency.

The main roads through the town are the A449 and the A417, and the M50 motorway runs to the south. Ledbury railway station is near the western end of the Cotswold Line and offers direct services to Hereford, Worcester, Birmingham, Oxford and London Paddington.

For many years the Robertson's factory, a subsidiary of Rank Hovis McDougall, produced jam. Production was moved to Histon in Cambridgeshire in September 2007 following the parent company's acquisition by Premier Foods.[15] The site is now used by Universal Beverages to process fruit for cider producers such as Bulmer's and includes two giant fermentation tanks, each capable of holding 800,000 litres.[16][17]

Ledbury enjoys an income from tourism, being steeped in history in an attractive rural area.

The town is the venue for various events including the Poetry Festival.[19] The annual Community Day[20] takes place in June each year. The first such event was an Ox Roast on 2 June 2013 to commemorate the diamond jubilee of Queen Elizabeth II's coronation, exactly 60 years after an ox roast that was held in 1953 in Ledbury on Coronation Day.

The Big Chill at nearby Eastnor Castle, which brought thousands of people to the area each year closed after the August 2011 event. Eastnor Castle has provided the backdrop to a number of films, including 1970's One More Time, starring Jerry Lewis and Sammy Davis Jr.[21] BBC television filmed some scenes for The Prince and the Pauper starring Nicholas Lyndhurst in 1976.[22]

The Market Theatre,[23] reputed to be the first in the world to open in the new millennium, is situated near the town centre. It has been built on the site of the former Church Room (a typical 'tin tabernacle' constructed in 1910, which became a theatre in 1956, with a change of name to the Market Theatre in the 1970s). From 1963 (following the demolition of the Kemble Theatre [24][25] in Hereford) until 1979, this little building was the only theatre in Herefordshire. Ledbury Amateur Dramatic Society (LADS)[26] runs it, mounting three of its own productions a year. They show films on a regular basis and play host to small and mid-scale professional touring shows, including events in the Poetry Festival.

There are a number of singing groups, including the Choral Society[27] and the Community Choir,[28] the latter with over 60 members.

In 2000, Ledbury formed a twinning association with the Swedish town of Strömstad. Since then, several cultural and sporting exchanges have taken place between the two: the junior football club, Ledbury Swifts,[29] makes an annual trip there.

The hunts (Ledbury,[30] which dates from 1846, and North Ledbury,[31] established in 1905) are well supported.[32] The Hunting with Dogs Act 2004 banned the country pursuit, which angered local people, some of whom joined the Countryside Alliance to register their protest. 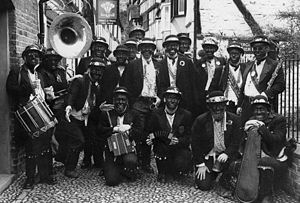 The town is home to the Silurian Border Morrismen.[33]

At Tedstone Delamere the Sapey Brook runs its course to Upper Sapey. A story is told of a stolen mare and colt whose hoofprints stopped at the bank of the brook. The owner was Saint Catherine of Ledbury who prayed for their safe return and, upon examining the bed of the brook, saw hoofprints clearly visible in the rocky bottom. These were followed and the thief caught, the horses being safely recovered. The nearby Hoar Stone is said to be the thief petrified for his crimes.[citation needed] A local pastime was once the creation of fake hoofprints for visitors; the original petrosomatoglyphs are visible in the brook to this day.[34]