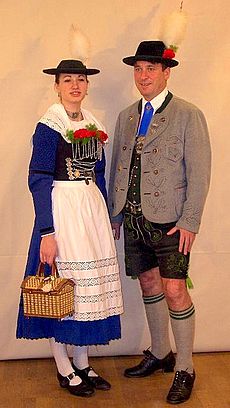 Lederhosen (IPA: [leːdə.hoːzən]; German for leather breeches; singular in German usage: Lederhose) are breeches made of leather; they may be either short or knee-length. The longer ones are generally called Bundhosen or Kniebundhosen.[1] 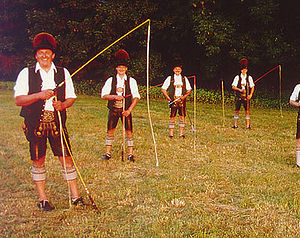 Formerly, lederhosen were worn for hard physical work; they were more durable than a fabric garment and easier to clean.[citation needed] Today, they are mostly worn as leisurewear. Today, Lederhosen and dirndl attire is common at Oktoberfest events around the world.

Lederhosen were once widespread among men of the Alpine and surrounding regions, including Bavaria, Austria, the Allgäu, Switzerland, and the autonomous Italian region of Trentino-Alto Adige/Südtirol (formerly part of Austria until after World War I). But they were not usually worn in southwestern Germany or Switzerland.

Tyrol is an area in western Austria and the autonomous German speaking region of Northern Italy (Trentino-Alto Adige/Südtirol formerly part of Austria). Lederhosen are a characteristic of this region.

La Couturière Parisienne, however, claims that lederhosen were originally not exclusively a Bavarian garment but were worn all over Europe, especially by riders, hunters, and other people involved in outdoor activities.The flap (drop front) may have been a unique Bavarian invention. The drop-front style became so popular in the 18th century that it was known in France as à la bavaroise, "in the Bavarian style."[2] 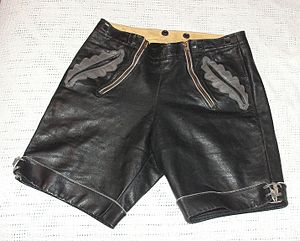 One attempt at modernizing lederhosen — “double zipper” lederhosen were once sold as workout wear in Europe during the 1970s.[citation needed]

The popularity of lederhosen in Bavaria dropped sharply in the 19th century. They began to be considered as uncultured peasants' clothing that was not fitting for modern city-dwellers. However, in the 1880s a resurgence set in, and several clubs were founded in Munich and other large cities devoted to preserving traditional rural clothing styles. The conception of lederhosen as a quintessentially Bavarian garment that is worn at festive occasions rather than at work, dates largely from this time.

Lederhosen have remained regionally popular and are popularly associated with virility and brawn.[citation needed] Some men wear them when gardening, hiking, working outdoors, or attending folk festivals or beer gardens. They are a symbol of regional pride in Bavaria and the other areas where they are worn, but are rarely seen elsewhere. The role of lederhosen in Bavaria is thus comparable to that of the kilt in Scotland and the cowboy hat in the United States.[citation needed] 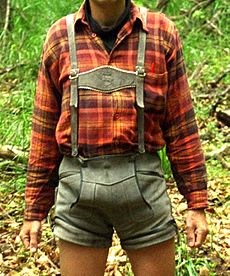 Boys’ lederhosen, usually shorter than men’s and lacking embroidery. Note the drop-front flap that is typical of lederhosen.

German boys used to wear lederhosen up to the age of about sixteen years. These lederhosen were not decorated with embroidery but had the typical attributes of suspenders/braces and drop-front flap. Even today, some German and French Boy Scouts wear various forms of lederhosen, although in most cases they are not part of their official uniform.

Lederhosen were also worn by Austrian boys from the 1930s to the 1970s. Today they are worn on special occasions, such as a Biergarten or Zeltfest. Girls wear the Dirndl, which is part of Austrian Tracht.