Lee Michael John Camp (born 22 August 1984) is a professional footballer who plays as a goalkeeper for Rotherham United and internationally he represents Northern Ireland, who he qualifies for through his Northern Ireland-born grandfather, although he previously played for the England under-21 team.

Camp started his professional career with Derby County in 2002, having progressed through the club's youth ranks. During a five-year spell at the club, he made 89 league appearances for Derby, and also went on loan to three clubs: Burton Albion in 2003, Queens Park Rangers in 2004 and 2007, and Norwich City, in 2006. He switched to Queens Park Rangers in July 2007, and made 50 league appearances for the club in a two season spell, taking his total number of QPR appearances to 73. Between October 2008 and January 2009, Camp was loaned to Nottingham Forest, signing permanently for the club in July 2009. In total, he made 182 league appearances for Nottingham Forest before returning to Norwich City in January 2013. He made three appearances in his second spell at the club, before being released on a free transfer in May 2013. He joined West Bromwich Albion in September 2013 and spent two months on-loan at Bournemouth. He was released by West Brom in January 2014 and subsequently joined Bournemouth on a two-and-a-half-year-deal.[2]

He made his first appearance with Derby County during the 2002–03 season, and joined Burton Albion on loan in January 2003. At the end of the same season, he went to Queens Park Rangers for the last few games also on loan, where he helped the club reach promotion to Division One. In Derby's end-of-season awards, he won both the Sammy Crooks Young Player of the Year award and the Brian Clough Player Of The Year award. Camp joined Norwich City on 7 September 2006, on a three-month loan with effect from 8 September, covering an injury to Joe Lewis.[3] Camp made his first Norwich City full début on 28 November 2006 against Leicester City. He kept his place for the following match against Sheffield Wednesday where he was unfortunate to score an own goal in a 2–1 defeat.

Camp joined Queens Park Rangers ("QPR") on a three-month loan deal on 12 February 2007, having helped the club achieve promotion in 2004 in a similar loan deal. He returned to Derby early, on 25 April 2007, after a suspension to Stephen Bywater left the Rams short of goalkeepers. 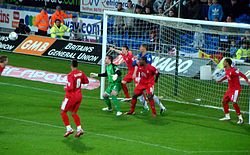 On 20 October 2008 Camp joined Nottingham Forest on a three-month loan.[5] He played a pivotal role in helping the club climb out of the bottom three and also saved two penalties; one against his former club Derby,[6] and one against Bristol City.[7] Both were in the final minutes of the games. He returned to QPR[8] when Colin Calderwood was sacked and replaced by Billy Davies, his former manager at Derby County.

On 2 July 2009 it was announced on Forest's official website that a transfer had been agreed and, subject to a medical examination, Camp was to complete his signing by 4 July 2009. The fee was reported to be around £100,000 but with additional payments.[9]

He made his first start as a permanent Forest player on 10 August 2009 in their league opener against Reading where they were unlucky to come away with only a 0–0 draw.[10] Camp made an excellent start as first choice Forest goalkeeper, conceding only one goal in six games and keeping a clean sheet for over 10.5 hours of football. He won the December Championship Player of the Month Award,[11] as well as helping the side up to the heights of second in the Championship by 17 January 2010.

After making such an impressive start for Nottingham Forest, Lee Camp continued to produce fine performances at the start of the 2010–11 season for Forest and was an ever-present in the Forest goal, featuring in every match of the 2010–11 season. Camp kept a total of 12 clean sheets and produced a number of fine performances that earned Forest valuable points. When Club Captain Paul McKenna was injured, Camp stepped in as the Nottingham Forest Captain. Nottingham Forest manager Billy Davies spoke of his delight at having a goalkeeper with the class of Lee Camp saying, "You talk about positives and negatives in players, but his performances have been first-class – simply outstanding." Camp kept a clean sheet in the first leg of the 2010–11 Football League Championship playoff semi final against Swansea City where he was forced to make numerous fine saves. Camp finished second in the club's player of the season award to Luke Chambers.[12]

In the summer 2011 transfer window, Forest rejected three bids from Swansea City – the highest of which was a £1.8m bid – for the services of Camp.[13]

Camp started the first game of season against Barnsley at the City Ground and kept his first clean sheet of the 2011–12 Championship season. Camp was able to keep his second clean sheet in the Reds' first league win of the season, against Doncaster Rovers. Camp's outstanding performance which saw him make critical saves against Watford, was key to seeing Forest pick up their second win and third clean sheet of the campaign. In what was a disappointing campaign for Forest, Camp started all 46 league matches, keeping 12 clean sheets.

Following months of unsuccessful contract negotiations and with Camp's contract set to expire, Alex McLeish confirmed that Camp wasn't part of his future plans, just weeks into his tenure as Reds manager, allowing Camp to move away from the The City Ground. Camp was released from his contract on 23 January 2013.[14]

Lee Camp signed for Norwich City on 23 January 2013 following his release from Nottingham Forest and would wear the number 42 shirt. He made his second debut for Norwich on 17 March 2013 after goalkeeper Mark Bunn was sent off for handling a loose ball outside of the penalty box. Camp made his full Premier League debut the following week away at Wigan Athletic. Camp was again used as a substitute in a home game against Swansea City after Mark Bunn came off with a groin injury.

He signed for West Bromwich Albion on 1 September 2013, following Ben Foster's stress fracture in his right foot ruling him out for up to 12 weeks, Camp was signed as cover on a rolling monthly contract.[15] After not making a senior appearance throughout September and October Camp joined Championship side Bournemouth on 31 October 2013 for a month's loan until 27 November 2013.[16] On 27 November 2013 his loan spell at Bournemouth was extended until 1 January 2014.[17] He was released on his return to West Brom.[18]

On 4 January 2014, after spending two months on loan at the club, Camp joined Bournemouth permanently on a two-and-a-half-year-deal following his release from West Brom on 1 January 2014.[19]

On 1 September 2015, Camp was released by Bournemouth and signed for Rotherham United

Camp played for the England under-21s five times, including the first (professional) match at the new Wembley Stadium. He stated that this honour was the highlight of his footballing career up to that time.[20] Camp conceded a goal 25 seconds after the game had started, making him the first man to concede a goal at the new stadium.[21]