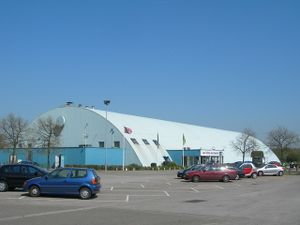 The Lee Valley Ice Centre is home to the Lee Valley Lions, an amateur side competing in the English National Ice Hockey League. It used to also be home to the London Racers, who competed in the top-level British Elite Ice Hockey League. The London Racers controversially withdrew from the British Elite Ice Hockey League after the club decided that the rink was not safe enough for "elite" level ice hockey. This was not backed up by any official report and was highly disputed by the park authority. It is thought[by whom?] the safety "problem" was used as a smokescreen to mask the team's financial problems. The Lee Valley Lions and the Junior programme continue to the current day.

The music video for Sugar Coated Iceberg by The Lightning Seeds, which featured on their 1996 album Dizzy Heights, was filmed inside Lee Valley Ice Centre.[1]