Lee John Westwood OBE (born 24 April 1973) is an English professional golfer. Noted for his consistency, Westwood is one of the few golfers who has won tournaments on five continents – Europe, North America, Asia, Africa and Australia – including victories on the European Tour and the PGA Tour. (Only four golfers – Player, Irwin, Langer and Graham – have won on six continents.) Westwood was named player of the year for the 1998, 2000 and 2009 seasons. He has won the 2000 European Tour Order of Merit, and the renamed 2009 Race to Dubai. Westwood has frequently been mentioned as one of the best golfers without a major championship victory.[3][4][5]

He has represented Europe for the last eight Ryder Cups. In October 2010, Westwood became the World number one golfer, ending the reign of Tiger Woods, and becoming the first British golfer since Nick Faldo in 1994 to hold that position. He held the number one position for a total of 22 weeks.[6]

Born in Worksop, Nottinghamshire, Westwood began to play golf aged 13 with a half set bought by grandparents. His father John, a mathematics teacher, took up the game at the same time to encourage his son. A talented sportsman at school, Lee played rugby, cricket and football.

Westwood had a later start at the game than many future tournament professionals, but less than two years later he was the junior champion of Nottinghamshire. In 1990 he won his first amateur tournament, the Peter McEvoy Trophy. In 1993 he won the British Youth Championship and turned professional.

In 1996, Westwood won his first professional tournament, the Volvo Scandinavian Masters, closely followed by the Sumitomo VISA Taiheiyo Masters in Japan. His success continued in 1997, defending his Japanese title and winning the Malaysian Open, the Volvo Masters in Spain, and the Holden Australian Open, beating Greg Norman in a playoff. He also partnered with Nick Faldo in the Ryder Cup that year.

Westwood took a significant break from the game following the birth of son Samuel Bevan in 2001, and together with a restructuring of his swing under David Leadbetter, led to him being out of contention in tournaments until his 2003 victory in Germany, his 25th worldwide.

Westwood returned to the winners circle in 2007 by winning both the Valle Romano Open de Andalucia and the Quinn Direct British Masters to bring his total European Tour wins to 18. As a result, he moved back into the top 50 of the Official World Golf Ranking. Westwood finished the 2007 season with five top 10 finishes in the last five events. He carried this form into the 2008 season, starting with two tied second places and a fifth, moving back into the top 20 in the world rankings.[7] At the Masters, Westwood finished tied for 11th and he narrowly missed out on becoming the first European in 38 years to win the U.S. Open, finishing 3rd on level-par.[8]

In 2009, Westwood had two further 3rd-place finishes at major championships, in the Open and the PGA Championship. In October 2009, Westwood ended his two-year wait for a tournament win by winning the Portugal Masters.[9] This was followed the next month with a win at the Dubai World Championship, which also brought with it the inaugural Race to Dubai title.[10] 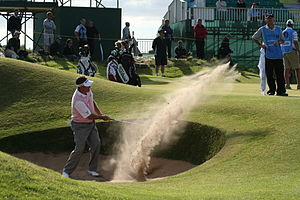 Westwood making a bunker shot at the 2008 Open

Westwood has played in the Gary Player Invitational charity event several times to assist Player raise money for children in need around the world.

Westwood earned a career-best second place at the 2010 Masters Tournament, leading by one shot going into the final day before being overtaken by eventual champion Phil Mickelson.[11] Westwood came through with his 2nd tour victory at the St. Jude Classic the week before the U.S. Open.[12] Westwood claimed another second-place finish at the 2010 Open Championship, although he was a distant runner-up to Louis Oosthuizen. Despite the two 2nd-place finishes at the season's first three majors, Westwood did not compete in the PGA Championship due to injury.

In May 2011, Westwood contested a playoff at the BMW PGA Championship with fellow Englishman and at the time world number two Luke Donald. On the par five 18th, Donald hit his approach shot into the green leaving six feet for birdie. Westwood attempted to follow him in close to the hole but got too much backspin on his pitch and the ball spun back into the water hazard. Westwood eventually chipped up from the drop zone and went on to make double bogey. Donald then holed his birdie putt to win the championship and in the process became the new world number one.[13]

In June 2011, Westwood equalled his best performance at the U.S. Open finishing in a tie for third place at Congressional CC, an event which was dominated by Rory McIlroy. This was the fourth time in his career that Westwood had finished third in a major.

In December 2011, Westwood shot the lowest round of his career, a 60, at the Thailand Golf Championship.[14] He followed that up with a 64 to equal the lowest 36-hole total on the Asian Tour[15] and won the tournament by seven shots.[16]

Westwood rejoined the PGA Tour for the 2012 season, stating that "It felt right in a Ryder Cup year" and intimated that he would like to experience the challenge for the FedEx Cup in the end of season playoffs for the first time. In February 2012, Westwood recorded his best ever performance at the WGC-Accenture Match Play Championship when he reached the semi-finals for the first time. In all eleven previous attempts he had never once made it past the second round. He beat Nicolas Colsaerts, Robert Karlsson, Nick Watney and Martin Laird on route before falling, 3&1, to Rory McIlroy in the semi-finals. He finished in 4th place after losing the consolation match to American Mark Wilson, 1 up.[17] Had he won the tournament, he would have regained the number one ranking.

Westwood continued his fine run of performances in the major championships with a tied third finish at the Masters in April 2012. He finished two strokes behind Bubba Watson and Louis Oosthuizen and bemoaned his putting performance as the reason he did not win the tournament.[18] This was the seventh occasion that he had recorded a top three finish at a major without actually winning one. In April 2012, he successfully defended his title at the Indonesian Masters on the Asian Tour, winning by two strokes. In June 2012, Westwood won the Nordea Masters for the third time, the week prior to the U.S Open, with a five stroke victory over Ross Fisher. This was Westwood's 22nd victory on the European Tour and moved him into ninth place alone on the all time European Tour winners list.[19]

At the 2012 U.S. Open, Westwood was in contention again after firing a three-under-par round of 67 in the third round to position himself three strokes behind the leaders. During the final round, Westwood lost his ball in a tree on the par-four fifth hole after his drive clattered into the pines. The ball was declared lost and he had to play his third shot from the tee, resulting in a double-bogey six which effectively ended his challenge. He finished in a tie for 10th.

In the 2013 Open Championship, Westwood led after 54 holes by two strokes over Hunter Mahan and Tiger Woods. They were the only three players in the field under par for the tournament. Westwood shot a four-over-par 75 in his final round to finish in a tie for third, four strokes back at one-over-par. Phil Mickelson went on to win the tournament with a total of three-under-par, the only player to complete the tournament under par. This was the second time Westwood had taken the lead into the final round of a major championship, with the other being in the 2010 Masters, which Mickelson also won. Westwood has now finished in the top-three eight times in majors without ever winning one.

In April 2015, Westwood won the CIMB Niaga Indonesian Masters for the third time in his career. He won in a sudden-death playoff over Chapchai Nirat, having held a five-stroke lead at the 54-hole stage. This was Westwood's ninth victory in Asian Tour events.

On 31 October 2010, Westwood became the World number one golfer, ending the reign of Tiger Woods.[23][24] He remained World number one for 17 weeks,[25] before being replaced by Martin Kaymer who held the top spot for 8 weeks. Westwood regained the number one spot after winning the Indonesian Masters on 24 April 2011[26] and held it for 5 weeks before being replaced by Luke Donald. He has spent over 310 weeks in the top-10 through mid-2012.[27]

Westwood made his Ryder Cup debut in 1997 where he partnered fellow Englishman Nick Faldo in both sets of fourballs and foursomes. In the 1999 Ryder Cup, he partnered Darren Clarke for the fourballs and foursomes, picking up 2 points. At The Belfry in 2002 he teamed up with Sergio García in a successful partnership in which they won 3 and lost 1 of their four matches.

In the 2004 Ryder Cup, Westwood sank the putt which took Europe's points tally to 14 and thereby ensured that they retained the Cup. Europe eventually won 18½–9½. It was his first victory in singles. He and Darren Clarke were the wildcard selections in 2006[28] and Westwood justified his selection by not losing a game, a feat he had also achieved in 2004. He is the eighth most successful European golfer on points scored, with the second highest scoring rate.[29]

During the 2008 Matches, Westwood sat out for the first session in his Ryder Cup career during the matches after a controversial decision by captain Nick Faldo. The European Team ended up losing to the U.S. 16½–11½.[30] In October 2010, Westwood was a member of the European team that won the 2010 Ryder Cup with a one-point win over the USA.[31]

He is the European player who has the greatest number of participations in Ryder Cup winning teams (7 wins, 2 losses).

Westwood married Laurae Coltart, the sister of Scottish Ryder Cup player Andrew Coltart,[32] in January 1999. The couple have two children, Samuel Bevan and Poppy Grace. He is good friends with fellow Ryder Cup star Darren Clarke and from April 2006; he co-owned a private jet with him.[33] The family live in Palm Beach Gardens, Florida on a house overlooking the 14th green of the Old Palm Golf Club.[2]

In 2007, Westwood was presented with an Honorary degree of Doctor of Science by Nottingham Trent University.[34] The University named its sports hall after the golfer in October 2010.[34] He announced the creation of the Lee Westwood Golf School in 2010, which offers young golfers the ability to combine golf training with their education as part of their school life. In addition, since 2010 Westwood has created a Junior Lee Westwood Golf Tour and Lee Westwood Golf Camps. [35] In recognition of his work with young golfers, he was awarded with the Golf Foundation's 'Spirit of Golf' Award just before the Open Championship, an award which was previously held by Gary Player and Tony Jacklin.[36]

Westwood's interests include films, snooker and cars. He is also a big football fan who supports Nottingham Forest.[37] Westwood is a follower of Dumfries based football club Queen of the South,[38] most likely due to having Andrew Coltart for a brother-in-law, who himself is a passionate supporter of the Scottish club.[39]

Westwood was appointed Officer of the Order of the British Empire (OBE) in the 2011 Birthday Honours.[41]

1 Co-sanctioned with the Asian Tour

* Note: The 1996 Sumitomo VISA Taiheiyo Masters was reduced to 54 holes.

1 Co-sanctioned with the European Tour

1Cancelled due to 11 September attacks
DNP = Did not play
QF, R16, R32, R64 = Round in which player lost in match play
"T" = Tied
WD = Withdrew
NT = No tournament
Yellow background for top-10.
Note that the HSBC Champions did not become a WGC event until 2009.