Leeds Art Gallery in Leeds, West Yorkshire, England, is a museum whose collection of 20th-century British Art is recognised by the British government as a collection "of national importance". Its collection also includes 19th-century and earlier art works. The gallery opened on 3 October 1888 as Leeds City Art Gallery and was paid for by public subscription, collected in honour of Queen Victoria's Golden Jubilee in 1887. The artist Hubert von Herkomer formally opened the building, and presented an example of his work to the collection. In 1912, the Leeds Art Collections Fund was formed to support the gallery’s acquisitions, which it continues to do today. The gallery is owned and administered by Leeds City Council.

Since January 2016 the gallery has been closed for renovation, and is planning to re-open in spring 2017.[1]

File:Leeds-City-Art-Gallery-1888.jpg
Opening of Leeds City Art Gallery in 1888 from The Illustrated London News

The gallery was built between 1886–88 by W. H. Thorp, as an extension to the Municipal Buildings to the west (built 1878–84 by George Corson, now housing Leeds Central Library).[2] It is grade II listed. A major renovation was completed in June 2007, including opening up the magnificent Victorian tiled hall (used as a café and bookshop) which links the gallery and the library. At first floor level there is direct access from the gallery to the Art Library. The gallery includes a ground floor lecture theatre which is used for a variety of events.

In front of the gallery is Victoria Square, at the eastern end of which is the city's war memorial. This square is often used for rallies and demonstrations because of the speakers' dais provided by the raised entrance to the gallery. A Henry Moore sculpture, Reclining Woman: Elbow (1981), stands in front of the entrance.

Works on display in the galleries include : 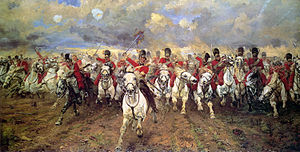