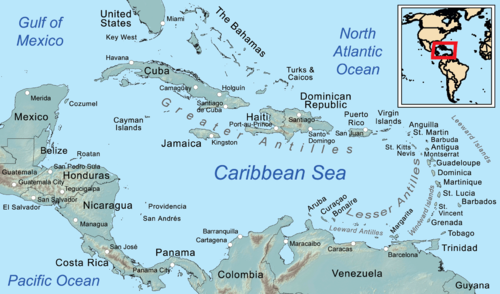 The Leeward Islands are labelled on the map's middle right side.

The Leeward Islands /ˈliːwərd/ are a group of islands situated where the northeastern Caribbean Sea meets the western Atlantic Ocean. On a map, they start with the Virgin Islands east of Puerto Rico and reach southeast to Dominica. In English, the term Leeward Islands refers to the northern islands of the Lesser Antilles chain. The more southerly part of this chain, starting with Martinique, is called the Windward Islands.

Charlotte Amalie, St Thomas, in the US Virgin Islands 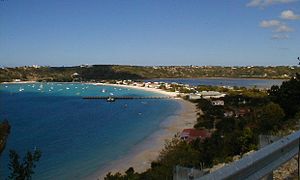 The name of this island group, Leeward Islands, dates from previous centuries, when sailing ships were the sole form of transportation across the Atlantic Ocean. In sailing terminology, "windward" means towards the source of the wind, while "leeward" is the opposite direction. In the West Indies, the prevailing winds, known as the trade winds, blow out of the southeast. Therefore, an island to the northwest, such as Puerto Rico, would typically be leeward of an island to the southeast, such as Antigua, and conversely, Antigua would typically be windward of Puerto Rico, but leeward of Guadeloupe and Martinique.

However, even in modern usage in languages other than English, e.g., Spanish, French and Dutch, all of the Lesser Antilles from the Virgin Islands to Trinidad and Tobago are known as the Windward Islands (Iles du Vent in French, Bovenwindse Eilanden in Dutch, and Islas de Barlovento in Spanish). The islands along the Venezuelan coast, known in English as the Leeward Antilles, in languages other than English are known as the Leeward Islands.

The islands are affected by active volcanism, and notable eruptions have occurred in Montserrat in the 1990s and in 2009 to 2010.

The Caribs, for whom the Caribbean is named, are believed to have migrated from the Orinoco River area in South America Venezuela to settle in the Caribbean islands about 1200 AD, according to carbon dating. Over the century leading up to Columbus' arrival in the Caribbean archipelago in 1492, the Caribs mostly displaced the Maipurean-speaking Taínos, who settled the island chains earlier in history, by warfare, extermination and assimilation.[2]

The islands were among the first parts of the Americas to fall under the control of the Spanish Empire. European contact commenced with Christopher Columbus's second voyage, and many of the islands' names originate from this period, e.g., Montserrat was named in honour of Santa Maria de Montserrat (Our Lady of Montserrat), after the Blessed Virgin of the Monastery of Montserrat, which is located on the Mountain of Montserrat, the national shrine of Catalonia. 'Mont serrat' in Catalan means 'saw mountain', referring to the serrated appearance of the mountain range.

British colony of the Leeward Islands

Although comparatively much smaller than the surrounding islands in the Caribbean, the Leeward Islands posed the most significant (though decidedly less severe in comparison to the colonies) rebellion to the British Stamp Act.[3]

In 1816 the colony was dissolved, with its last governor being James Leith.

Today the Islands are governed by a number of national and colonial administrations.

From the northwest to the southeast, the islands are: