Founded in 1990, largely as a successor of the Finnish People's Democratic League (SKDL), it has received quite some electoral success, receiving shares of votes of around ten percent in parliamentary elections. The party is a member of the Party of the European Left and Nordic Green Left Alliance. The party organ is the weekly Kansan Uutiset.

The party's short history has been characterised by internal disputes and bickering, as it was formed by people with very different views on society. There have been several defections from the Left Alliance to the Social Democratic Party (SDP) and the newly formed Communist Party of Finland. In 2005, the party's former secretary and Central Organisation of Finnish Trade Unions's assistant head Matti Viialainen formed a society to promote merger between the two largest Finnish left-wing political parties, the Left Alliance and the SDP. This caused an outrage within the Left Alliance, and Viialainen was condemned for wanting to break up the party. Viialainen would subsequently leave the party and run for parliament on the SDP ticket in 2007.[6]

In 2006, the party's leader Suvi-Anne Siimes announced her resignation from the post, and the party, as a result of long-standing feuds with the leftist section of the party. On May 13, 2006, Martti Korhonen was elected as the new party leader. He was followed by Paavo Arhinmäki in June 2009, following the party's bad performance in the 2009 EU parliamentary election.

The party won 14 seats in the election in 2011, but two MPs were expelled from the parliamentary group after repeatedly breaking from the official party line.[8] The party lost its MEP in the 2009 European elections, but was able to regain the seat in 2014.

Left Alliance party program adopted by the 5th Party Congress 16 June 2007: The fundamental values of Left Alliance are equality, freedom, sustainable development, and democracy. They think democracy must be strengthened and it must be stronger than the power of capital, challenging the global capitalism. Important values include also getting world into solidarity and stop Finnish polarization, freedom and the right to work and income for all people, environmentally conscious Finland. [3] The party is for equality in all its forms and identifies strongly feminist and anti-racist just as well as supporting economic equality. The party supports basic income and supports strongly the weakest members of the society.

Some in the party accept the EU and others reject it. The younger generation of the party is more pro-EU than the older. Also, the younger leadership has been gradually changing its politics to quite Green-lined positions, thus losing some worker voters, but gaining then a threshold support from young people of bigger cities in the South[citation needed] 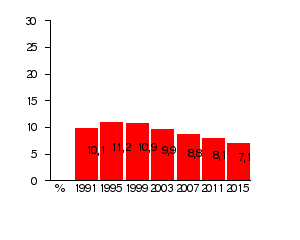