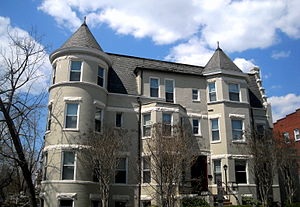 Former legation of Iran at the time of the Qajar dynasty in Washington, D.C.