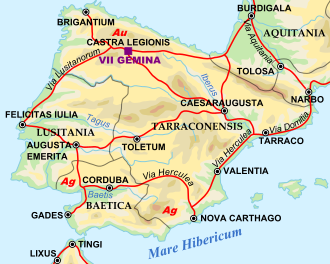 Map of the Iberian peninsula in 125 AD, under emperor Hadrian, showing the Legio VII Gemina, stationed at Castra Legionis (León, Spain), in Hispania Tarraconensis province, from 75 AD until the 4th century

Legio septima Gemina (properly Geminia: Latin for "The Twins' Seventh Legion") was a legion of the Imperial Roman army. It was founded in AD 68 in Spain by the general Galba to take part in his rebellion against the emperor Nero. "Geminia" means the legion was dedicated to the legendary twin founders of Rome, Romulus and Remus, who were suckled by a she-wolf. The legion was deployed the city called Legio (modern-day León, Spain) in AD 74 and remained in Hispania to the end of the 4th century.[1]

Tacitus calls the legion "Galbiana", to distinguish it from the senior Legio VII Claudia, but this appellation is not found on any inscriptions. It appears to have received the appellation of "Gemina"[2] on account of its amalgamation by Vespasian with one of the German legions, not improbably the Legio I Germanica.

Between 86 and 89 the Legion was commanded by the future emperor and native of the region Trajan.[3]

After serving in Pannonia, and in the civil wars, it was settled by Vespasian in Hispania Tarraconensis, to supply the place of the Legio VI Victrix and Legio X Gemina, two of the three legions ordinarily stationed in the province, but which had been withdrawn to Germania.[4] That its regular winter quarters, under later emperors, were at Leon, we learn from the Antonine Itinerary, Ptolemy, and the Notitia Imperii, as well as from a few inscriptions;[5] but there are numerous inscriptions to prove that a strong detachment of it was stationed at Tarraco (modern Tarragona), the chief city of the province. The following are a selection, in order of time:[6]

In the inscriptions the legion has the surnames of "P. F. ANTONINIANA", "P. F. ALEXANDRIANA", and "P. F. SEVERIANA ALEXANDRIANA"; and its name occurs in a Greek inscription as ΛΕΤ. Ζ. ΔΙΔύμη,[7] while another mentions a χιλίαρχον ἐν Ἱσπανίᾳ λεγεῶνος ἑβδόμης.[8] There is an inscription in which is found a "Tribunus Militum LEG. VII. GEMINAE FELICIS IN GERMANIA", from a comparison of which with two inscriptions found in Germany,[9] it has been inferred that the legion was employed on an expedition into Germany under Alexander Severus, and that this circumstance gave rise to the erroneous designation of Γερμανική in the text of Ptolemy.[10]

The legion had units stationed at their extended fortified camps:

Also under the legion were five auxiliary units, a cavalry wing, two cohorts of equitatae and two of peditatae,

During the majority of its existence the number of effectives under the military commander of the VII were usually around the 7,712 between auxiliaries and regulars, not counting local levies and other reinforcements send from Rome for temporary services.

The station of this legion in the Gallaecia Roman province grew into an important city, León, that after the invasions of 409 AD in Iberia became part of the Suevic Kingdom, which resisted the attacks of the Visigoths til 586, when it was taken by Leovigild; and it was one of the few cities which the Visigoths allowed to retain their fortifications. The Roman bridge over the Tâmega River in Chaves, Portugal, then Aquae Flaviae, was built by the stationed legionaries of the Legio VII Gemina at the time of Trajan.